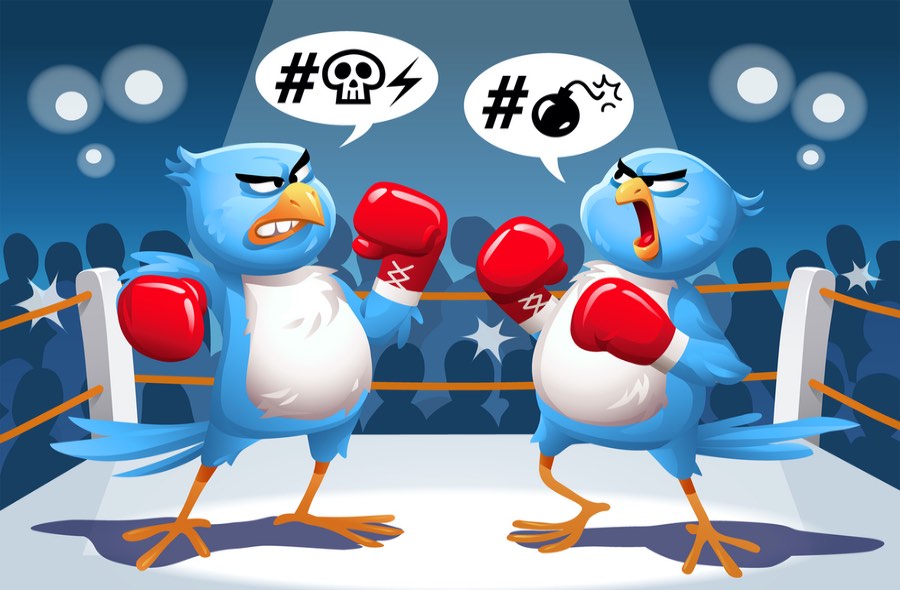 Anyone agree with me that most online religion and political debates are about as clean and clear as a pool of toxic waste? I’ve got six steps here by which you can shift to better, more productive online discussions.

I’ll start with an example. I saw this image posted in a Christian Facebook group the other day. A woman speaks the truth about God’s plan for sex, and a man comes back with the challenge, “Show me Adam and Eve’s marriage certificate.” The person who posted this for the group said, “I’m very curious how y’all would respond to this!”

How Would You Respond?

I saw that and I was curious, too: I wondered how the other group members would answer. I was disappointed. As of this morning there were 366 comments on that Facebook post, and not one of them gave the answer that question really needed. Not even one. (Well, okay, I answered, too. Other than that, I mean.)

I’m quite serious. It might sound bold, but I’ll say it anyway: Their answers were all wrong. 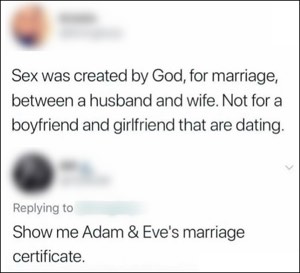 How would you respond to this?

They were wrong even though most of them were right. Sure, they said true things, for example:

This is all true enough, but a true answer isn’t always the right answer. A right answer is one that’s both true and appropriate to the need of the moment. They’d all misread the second part of that. I’ll bet it hadn’t even occurred to most of them.

What they missed here was the difference between a mindless challenge and a reasoned argument. The two are very different, and they need different kinds of answers.

Here are three easy ways to tell them apart.

I refuse to believe this guy (I’ll call him “Will”) needed anyone explaining that his response was anachronistic. He couldn’t be that stupid, yet he asked a truly mindless question. This is what it looks like (see point 3 above) when people are trying to start something stupid. Too often they succeed. We play the game; we respond; and then it turns toxic.

Reasoned arguments deserve reasoned answers. But you don’t rebut a challenge like this one; there’s nothing there to rebut! Did Will get his facts wrong? No, he didn’t offer any facts. Did his reasoning need correcting? He didn’t offer any! If you think he did, then you’re making up his reasons for him. “Let’s see, if he said this, then he must have meant that, and then that, and then …” No! Let him do that work, not you.

You don’t answer this kind of challenge as if it were a reasoned argument. Here are six steps to a better way, starting with the “don’ts.”

How Not To Answer This Kind of Challenge

Second, don’t rebut it as if it were an argument. Don’t waste your time, when you could be doing something worthwhile instead — studying, caring for the poor, visiting with your family. Or maybe even raising the level of the debate by following points 3 through 6.

How to Respond Instead

Third, treat the question with respect, but treat it as a question. “Thanks for the question, Will.” This is being gracious, obviously, but in the process you’re also respecting Will. You’re treating him as a fellow human being, not a net to smack your logical points across. (How often does that happen in these debates?)

Fourth, ask your own questions. “Tell me, why do you ask? What difference do you think it makes if there’s no marriage certificate?”

The right answer is one that’s both true and appropriate to the need of the moment. They’d all misread the second part of that.

By asking respectful questions this way, you’re declining the bait. You’re telling him that he might want to play stupid, but you’re not going there with him. You’re not interested in his games, but you could be interested in his thinking.

Answer this way, and you’ll have at least three good outcomes:

So you ask your questions. Then what? You’ll get a real answer from Will, or else you’ll get more of the same snark. I’m willing to answer empty questions once or twice, as it’s a matter of offering to treat a fellow human being with more respect than he’s offering me. There’s a limit, though, which leads to our final two points.

Fifth, stay in the conversation as long as you’re getting real answers. Keep asking questions, genuinely interested ones, but also probing him to see whether he can show real reasons for his position. Soon enough you’ll reach a point where he’ll realize he doesn’t have a good answer. Maybe then he’ll ask you what you think, and the door is open for you to explain.

Practice this. Study Greg Koukl’s Tactics for more good guidance on it.

Or you could get more scoffing back from Will. It might happen immediately, or it might come a few discussion rounds later. Then what? Point six:

Sixth, when it’s over, walk away. I don’t mean when they think it’s over. They’ll hook you in forever if you let them. Walk away when they quit responding with some semblance of reason. Tell them you’re done, then be done.

Someone tried heavy tactics on me once: “You can’t walk away! Your Bible says you have to witness to me.” That’s actually more of an argument than the one we started with above; at least he offers something vaguely resembling a reason. This one’s easy, though. Jesus Christ walked right out of conversations that were going nowhere, and if He did, we can, too. (This is also why I don’t rely on non-believers to teach me the Scriptures.)

The same goes for rude onlookers who try to spoil the tone. You can’t control them, but you can tell them it’s your policy to answer good questions, not rude ones. About 99.9 percent of the time they’ll respond rudely. Just follow the plan. Ask them a respectful question or two, and if they don’t respond in kind, ignore them.

These six steps won’t keep every online debate from going toxic, but they’ll keep you from spreading more poison yourself. You might even be a good influence on Will!

And if not, you could always spend your time doing something worthwhile instead.