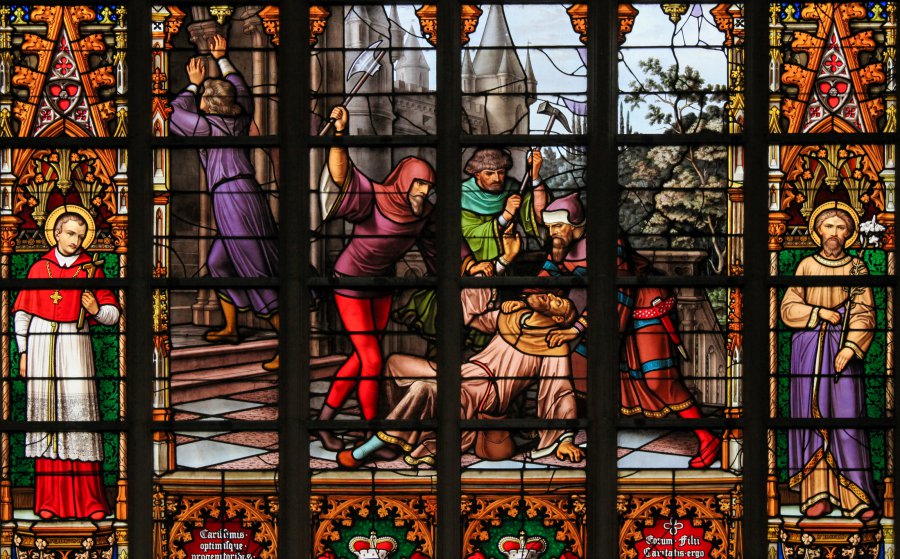 A stained glass window from Cathedral of St. Michael and St. Gudula in Brussels, depicting the antisemitic legend of Jews stealing sacramental bread.

Much of that work is good. Indeed, surprisingly good, if you know her only by her reputation in the conservative Catholic blogosphere. Simcha will defend “Baby, it’s cold outside” against the silly claim that it’s a rape song. She will offer spot-on advice for young couples struggling with Natural Family Planning. She will speak for the unborn with eloquence. Her criticism of Pope Francis packs a punch precisely because of her reputation, because you expect her to defend him.

At her best she is a modern Catholic version of 20th century motherhood comedian Erma Bombeck or one of Bombeck’s present-day successors. At her not-so-best she is our Roseanne Barr.

And at her worst she can paint her targets with a broad brush, slurring well-meaning people on scant evidence. Simcha can write, for instance, that President Trump’s attempts to fight crime by illegal aliens will lead to an American Kristallnacht. Or that Ben Carson hates the poor.

Or that Catholics don’t care about anti-Semitism. I have to say, as a fellow “Catholic of Jewish origin,” I don’t see it.

Catholic News Service stupidly tweeted a photo that was the opposite of what they intended to convey and then compounded the offense with two inadequate apologies. The Jewish writer David P. Goldman called it a “well-meaning but awkward tweet.” Yet that tweet-gone-wrong somehow becomes a jumping-off point for Simcha to explain how almost any critic who ever referenced her Jewishness or George Soros is an anti-Semite. And that there is some large undiscussed undertow of anti-Semitism among Catholics in general.

CNS’s clumsy apologies leave Simcha with “a dreary certainty that CNS learned the lesson ‘Jewish people are touchy.’” How she is so certain of this she does not explain, but knowing CNS, it doesn’t seem likely. She insists that Catholics look the other way on anti-Semitism “if the antisemite does other good things or is an effective fundraiser for Catholic causes.”

Simcha says that Catholic News Agency (a entirely separate group) had been informed that the name Soros “is shorthand in the United States for ‘evil Jewish influence.’” Nonetheless, it kept this “anti-semitic dogwhistle” in a story. “There are so many Catholics of bad will,” Simcha says (the emphasis is hers). “I don’t like guilt by association,” she tells us. But she engages in quite a bit of it:

Granted, Simcha’s gig is different than mine. She and I attract different types of attention. So I’m not accusing her of making it all up, unfair as she was to CNS.

Catholics the Only Ones

That is not to say that I have never experienced anti-Semitism from Catholics. (My father was Jewish, though I was raised in my mother’s Catholic faith.) In fact, they’re the only ones from whom I’ve ever experienced it. As the head of a socially conservative ecumenical organization, I represent people from all walks of life: Evangelicals, Mormons, secularists, etc. None of them have ever breathed a word of Jew-hatred to me.

Quite the opposite. The Evangelicals treat you as if you’re descended from royalty. I even have a little bit of a mystique among some of them owing to the persistent-but-false rumor that I’m a convert from Judaism. (I’m not. My Dad’s Jewish, but we were raised in the Catholic faith of my mother.)

Ah, but my fellow Catholics. Yes, I have seen it there.

Here’s the thing, though. I remember those episodes because they were the exceptions. I’ve only experienced it among a few Catholics on the outer fringe of the Tea Party movement and some (by no means most or even many) Latin Mass Catholics. The latter, I really want to underline, were a minority-within-a-minority. That’s not been my experience of most of the Latin Mass crowd.

As for the former, there was this one really ugly episode about four years ago. I screenshot it, wrote a long post in response, and it sits there today on my Facebook under the “Only Me” privacy setting. No one has ever seen my post on it except my wife and a friend.

“I have never felt like a victim of anti-semitism in my life … until today,” reads the first sentence. Which, again, gives away how unusual it was. My organization’s political action committee had endorsed one candidate and not another many conservatives supported. Here’s one typical response: “It’s all about $$ … Wolfgang can shove it! $$$$hungry phoney…”. They might as well just have said what they were thinking: Wolfgang’s a Jew.

Unfortunately, I can attest to the fact that some Catholics hate Jews. But I can’t go along with Simcha’s generalizations, which I don’t think she comes close to supporting. I can’t speak to every episode she mentions to make her case. But I do remember the one involving Austin Ruse. Simcha’s accusations of anti-Semitism on Austin’s part are ludicrous.

Simcha doesn’t mention that she and Austin had a subsequent exchange on her Facebook page in which he said he did not mean to imply that she was on Soros’ dime. He’d included reference to her work, in an article on attacks on conservative Catholic colleges that were actually funded by a Soros group. He told her he would ask Crisis‘s editor to clarify the point. When Austin mentioned this on her facebook page she took down her comment accusing him of anti-Semitism.

And yet, here we are again, with Simcha accusing Austin of anti-Semitism largely because he is a critic of George Soros. Simcha ignores the fact that Soros is criticized by many — including me — because he is a leftist who attacks some of the bedrocks of Western civilization. He is not always criticized because he is Jewish, a faith with which neither he nor many of his critics identify him.

Yes, for some his name is a dog-whistle for “Jew.” But for most conservatives, it’s a symbol for “Very, very rich leftwing foreigner who uses his money to influence American politics.” Soros functions for them exactly the same way the Koch brothers do for leftists.

The rise in anti-Semitism is a real thing. The hatred of Jews is ugly, vile, frightening, and you can find it in fringe Catholic circles. I know that from my own experience. Verbal violence can encourage physical violence. Pittsburgh was a real thing.

But elevating well-meaning but idiotic tweets to the same level as real anti-semitism distracts us from fighting the real hatred of Jews. So does generalizing from the tweets and a few bits of doubtful evidence to widespread anti-semitism among Catholics.