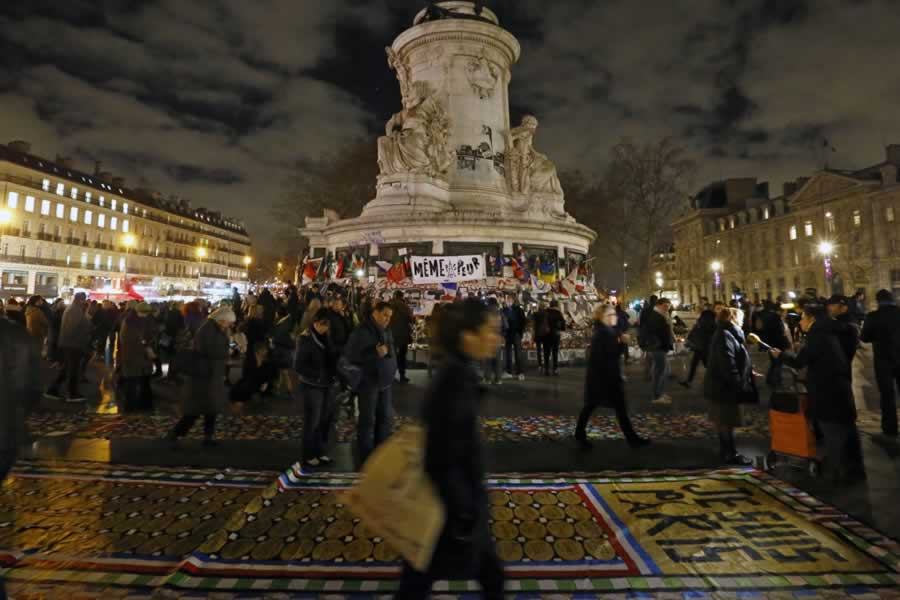 People stand next to banner reading "je suis Paris", "I am Paris" on the Place de la Republique during a gathering that marks one year after the attacks on Charlie Hebdo satirical newspaper, in Paris, France, Thursday, Jan. 7, 2016.

There’s only one thing worse than sharia … and that’s intolerant European secularism.

The converse is also true.

Whichever creed you’ve read about most recently. … You want the other one to prevail. As grotesque as we find bearded foreigners supporting multiple wives and uncountable children on Swedish or Belgian welfare. … What do we think when we learn that:

That kind of refined, depraved and emotionless evil doesn’t even seem human. Any man can understand, at a base level, the appeal of a harem “endorsed” by almighty God. And a creed that promises paradise for slaughtering your enemies. Yeah, it’s low-level primate behavior. But it’s at least mammalian.

The cult that is secular Europe (and Americans who emulate it, see the Ivy League)? That’s just bizarre. It’s stranger than Scientology. Don’t call it subhuman like the Islamist war-church. It’s anti-human. You wonder if it was invented by clever dolphins, eager to clear us out so they can inherit the planet. Or maybe the robots are whispering it in our ears.

You’d prefer that the two sides settle their quarrel by duel at dawn. With flamethrowers.

It’s like the old Iran-Iraq war of the 1980s. You wish that both sides could lose. It’s a fight between murderous bandits and the agents of The Matrix. Whom should we root for? You’d prefer that the two sides settle their quarrel by duel at dawn. With flamethrowers. You want to bring some S’Mores, to cook over their ruins.

A Sharia State Inside France?

A recent proposal that appeared in France points up the paradox. The Gatestone Institute reports:

A French intellectual, Christian Moliner, recently suggested that France should establish a Muslim state-within-a-state that adheres to sharia law, inside the borders of France, to avoid a civil war. Warning against refusing to deal with the problems of Islamism in Europe because of political correctness, he stated:

“Out of the fear of appearing Islamophobic, to satisfy this bustling fringe of Muslims, governments are ready to accept the spread of radical practices throughout the country … [some] territories are outside the control of the Republic. The police can come only in force and for limited durations. … We can never convert the 30% of Muslims who demand the introduction of sharia law to the merits of our democracy and secularism. We are now allowing segregation to take place that does not say its name.”

“… Establish a dual system of law in France … one territory, one government, but two peoples: the French with the usual laws and Muslims with Qur’anic status (but only for those who choose it). … The latter will have the right to vote… but they will apply Sharia in everyday life, to regulate matrimonial laws (which will legalize polygamy) and inheritance… They will no longer apply to French judges for disputes between Muslims … conflicts between Christians and believers will remain the responsibility of ordinary courts. …”

As the polls show, there already are “two peoples” in France and large parts of Europe, who wish to live according to completely different standards, as Moliner suggests. Politicians persist in ignoring these facts or downplaying them. So why be shocked at the suggestion of a “two-state solution” for France? How do these politicians, who do not even acknowledge the problems, propose to tackle the fact that large percentages of their population would rather live under sharia law? They do not propose anything. They pretend that this information does not exist.

Now your first reaction to reading this is rightly outrage. These aliens have no place in France. The government would be right to remove sharia supporters. All of them. Given the plague of terrorism in France, the state would be as justified as the Czech government was in 1945 in expelling Sudeten Germans after their leaders cooperated with Hitler.

But. And it’s a big But. The French Republic’s secularism is not what we have known in the United States, from 1783 through 2015. (That’s when Obergefell v. Hodge essentially declared orthodox Christianity the legal equivalent of white racism.)

No, French secularism is in no way akin to the prudent, cautious Anglo-American choice to avoid an established religion. It is an established religion. In its own way it’s just as intolerant of Christianity as Islam is. Think about this: In 1789, the Estates-General began their meeting with a Eucharistic procession led by bishops. Those bishops resisted the revolutionaries’ efforts to seize control over every Christian institution in the country. So the rebels turned against them. By 1793, the armies of the French Republic were drowning hundreds of thousands of Christian peasants in rivers in the Vendée.

The Godless Government Owns Everything

The vicious intolerance of French secularism resurfaced in 1905. That’s when the Third Republic seized every church and every Christian school in the country. It expelled thousands of priests, brothers, and nuns who offered affordable education to the poor. The state confiscated everything. To this day, every church in France is federal government property. That’s true of churches in Turkey and Egypt, too.

There are virtually no private Christian schools, universities, or charities in France, or most of Western Europe. The secular state takes the initiative. It sets the tone. Then it imposes upon the people the views of its godless elites. It taxes huge percentages of everyone’s income. It provides the relevant benefits. Most of a citizen’s wealth and life is administered by the government.

The Subjugation of Church by State

That model is the one that inspires the left here in America. It’s only the curious heritage of Anglo-American rebelliousness that sets the U.S. apart as the land of lively churches, private schools, private firearms, and robust freedom of speech.

Between secular sharia and the original, Muslim article, there is very little to choose.

Let’s pray that secularists are scared enough of sharia to finally close the borders. That they repatriate large numbers of alien colonists to the countries where they’ll feel comfortable. But that’s just a first, feeble step.

A New Birth of Evangelism

Only the Holy Spirit, poured out in self-sacrificial lives of millions of Christians, can fill that abysmal void.

Those Muslims willing to play by the rules of secular societies will stay in Europe. Their rights must be protected. But they need and deserve something much more than empty “tolerance.” Just like the godless post-Christians who surround them, they need the Gospel.

The West needs a fierce explosion of evangelical fervor. You can’t beat something with nothing. We must offer something more than dusty statues, vapid Kantian formulas, and bland humanitarianism if we would win people away from the death cult of jihad. Only the Holy Spirit, poured out in self-sacrificial lives of millions of Christians, can fill that abysmal void.