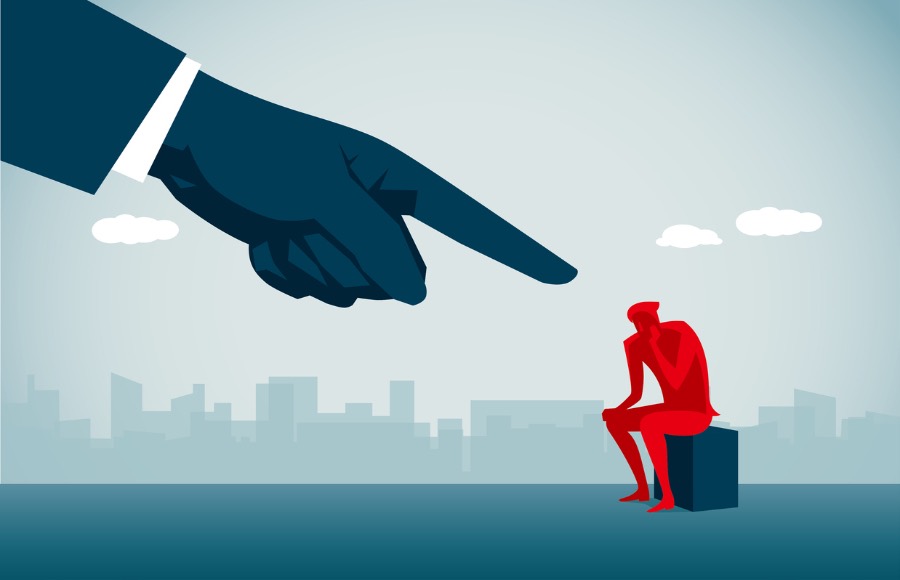 I had breakfast with a friend this morning who reminded me just how shame-based the culture wars have become. The Left initiates it, and conservatives imbibe it.

I’m talking about shame such as, “Either you support gay marriage or you’re a hater,” or, “If you’re a white male you’re racist.” The latter one is shame’s poster boy. It has the key elements in spades: There’s something terribly wrong with simply being white and male. It’s even worse if we’re not gay or trans. And we owe it to ourselves and the world to feel bad about it. Whatever we do, though, we’re stuck with the shame. We can’t make it go away — because it isn’t just what we’ve done, it’s who we are.

Shame sticks on you. You can’t shake it off. It’s literally hopeless. Unless we can recognize it as guilt instead, and find forgiveness. The culture wars desperately need forgiveness. Christianity specializes in forgiveness, partly because it knows the reality of right and wrong. You can’t get to forgiveness without having something actually wrong to forgive.

Of course wrongdoing doesn’t automatically lead to an awareness of guilt. It can lead to shame, or it can lead to denial. Conversely you can’t get to guilt without going through wrongdoing, but you sure can get to shame — the horrible “I’m bad” feeling that you can never make go away.

Shame is spun out mostly by the left these days. I think it’s partly payback — and that’s for real wrongdoing, by the way. The world imposed shame on blacks for such a long time, just for the color of their skin. Payback is no answer for shame, though; it only divides and alienates. Which is where our world is increasingly headed in race relations. Shame isn’t helping us a bit.

Gays, lesbians, and trans persons also suffered shame for a very long time, and they’re pushing their payback strategies even more aggressively. (There is no gay-rights Martin Luther King, Jr., or had you noticed?)

Of course the roots of LGBT shame are much more complex. Few gays asked to be that way; that side of them has nothing to do with what they do; it’s more nearly like black shame, in that it’s based in how they are. When they practice same-sex intimacy, though, that’s doing. And remember the difference between shame and guilt? One is for what one is, the other is for what one does.

At any rate, shame-focused gay activism is driving deep wedges in culture, as activists brand their opponents as haters and bigots. In more than a few cases they’ve used shame — and the cooperation of some courts — to try to force them out of their businesses and bank accounts. They’ve even succeeded in shaming businesses, governments, and even some churches over to their side of the culture war.

For here, as I see it, is what’s at work in the meteoric rise of gay and lesbian activism, and even more so for transgenderism: America has been ripe for shaming; at least that part of America that doesn’t get the difference between shame and guilt. For America has a guilty conscience. In matters of race, that guilt is wide open for review and inspection: all the ways whites have done blacks wrong, across so many generations.

But race doesn’t explain all of America’s guilty conscience. There’s a secret underside as well, and it’s all about sex. Adultery. Sleeping with multiple partners, which always implies deceit and unfaithfulness. Boasting about it, making every sexual “partner” — not the best word, just think about it! — a “score,” instead of a fellow human being Breaking up families; hurting children. Dealing in and viewing pornography. Killing babies through abortion.

America’s conscience is as guilty as can be. We don’t know how to deal with guilt as guilt, though, so we’ve shifted it over to shame. Ashamed of our discriminatory past, we try to shed that shame, typically through two opposite though equally hopeless strategies. On the one side, some react against the guilt through denial, making light of blacks’ struggles, some even adding rage and turning it into supremacist positions. Both are wrong, though the latter is much worse.

Others take the opposite strategy of trying to wash off their discriminatory past like Lady Macbeth — washing and washing and washing, but the spot never comes out. So when gays say they’re suffering discrimination, some rush to wash that stain off, too. When trans persons — really quite a different group, with different issues stemming from different, though still mysterious causes — claim discrimination, they rush even quicker to wash that away. What else are they going to do? The guilt just keeps getting piling up on them, and they don’t know any other answer. So when even drag queens — the most obviously, visibly perverted subgroup, except during pride events — say they should get their say at children’s story hour, guilty parties hurry to scrub off that stain of discrimination, too.

Meanwhile their acceptance of these groups affords a nice side benefit to many (not all, but many): If we can agree that homosexuality, transgender, and peddling perversion to children are all just fine, then how much more acceptable is their own sexual sin! It gives them a nice out from their guilt, another way of shedding shame. Except it only buries it instead, and in a shallow grave. From the burial sands it seeps out pain, loss and deep relational damage.

Meanwhile their acceptance of these groups affords a nice side benefit to many (not all, but many): If we can agree that homosexuality, transgender, and peddling perversion to children are all just fine, then how much more acceptable is their own sexual sin!

Do you doubt straight persons’ sexual sin is a factor in our culture’s acceptance of homosexuality and transgenderism? Then do you believe for a moment that the LGBT movement would have gotten anywhere in our culture, if straights were living in faithful marriages, with sane sexual standards? There’s absolutely no doubt that that would have made it impossible to carry on perversions like Gay Pride Parades and Drag Queen Story Hours. Not only would guilt be removed from these persons’ equations, but families would be that much stronger. And for all the questions and disagreements from the gay activist side, there really is a familial component to the causes behind homosexuality and transgender conditions.

I don’t mean to oversimplify. It makes sense to focus on discrimination and sex, because these are the chief points of conflict in the culture wars. They’re not the only factors; but factors they are. It’s diagnostic of what’s going on, even if it doesn’t explain all that’s going on.

And diagnosis leads to solutions. There is no answer to shame, but there is to guilt and to mutual hatred. It’s called the Gospel. More to come on that soon, in part 2.

First of three on “Why the Culture Wars Need the Gospel.”