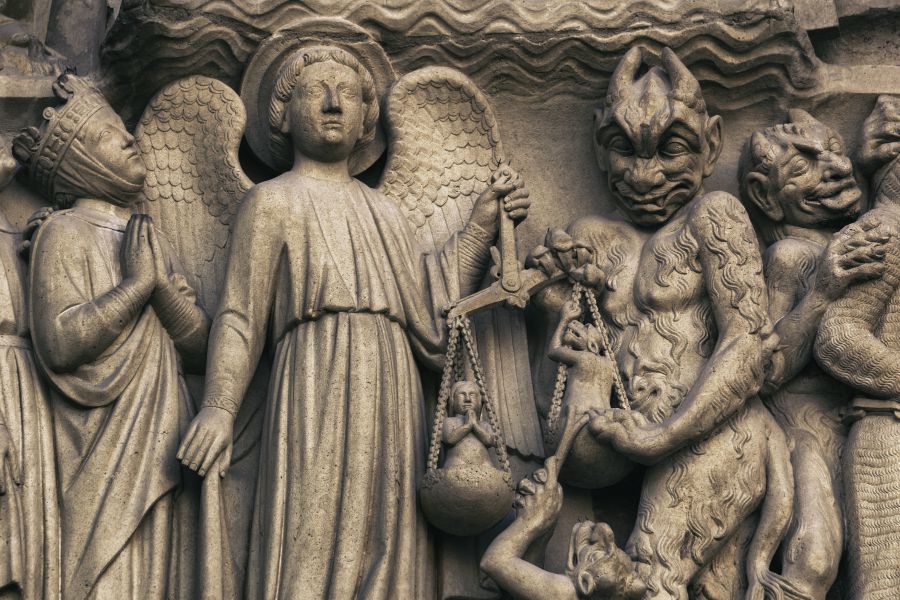 The archangel Michael and the Devil. The righteous are led to the left towards Heaven and the condemned are lead to the right, to hell, by a devil. From entrance of Notre Dame Cathedral in Paris called the Portal of the Last Judgement, built in 1220s and 1230s.

I had remembered him as a genial atheist, from having read him years ago. Martin Gardner admired G. K. Chesterton, after all. He even published an annotated version of Chesterton’s Father Brown mysteries, a book in which a believing Christian is the hero. For being so rational.

In a bookshop the other day, I picked up his Did Adam and Eve Have Navels?. It’s the last collection of his columns from a magazine called The Skeptical Inquirer. He’s very good on silliness like new age fads and I looked forward to seeing him smack down the lunacy.

And found that I’d misremembered his writing. Martin Gardner’s not so genial. As far as religion goes, he’s simple-minded and shallow. He feels much too confident in his ability to know what’s what.

But then, atheists have to be, because they make claims they can’t logically make. They don’t know as much as they pretend to know. As Hamlet might have said, “As far as you know, Horatio, there are more things in heaven and earth than are dreamt of in your philosophy.”

Gardner complains that the “ignorant” public doesn’t know anything about science. Half of American adults believe in astrology, he says, and yes, that’s sad. But then he adds to his list of absurd unscientific beliefs a belief that doesn’t belong on the list. He includes belief in angels and demons.

A belief common to pretty much every world religion. But for Gardner, something as ridiculous as astrology. He says this as if it were obvious, the kind of thing every sensible person knows. He doesn’t bother to argue it.

But why? Let’s look at it objectively. Rationally. The way Gardner thinks he looks at the world.

We may be alone in the universe, as he believes. But … we may not be. The atheist can’t say for sure.

Let’s look at this the way the atheist should. The way he claims to. Rationally. If we share this world with spiritual beings, we almost certainly don’t know what they’re up to.

We and they might be two circles in a Venn diagram that barely overlap. Maybe the spirits have other things to do than attend to man. They think about us as often as we think about the earthworms in the yard. Maybe they attend to us once in a while, for reasons of their own. That’s what the fairies many cultures believe in do.

Maybe, for all Gardner can know, they care about us. Christians, Jews, and Muslims believe that. And maybe the spirits line up on two sides. People do. Why not spirits? Some want us to do well (angels) and others want us to suffer (demons).

Maybe the Venn circles overlap a lot, but they keep themselves hidden. We don’t know what they’re up to. They may want to act mostly behind the scenes.

The ones who want us to do well may want us to grow up, do the right thing on our own, and not depend on them for help. They may stay out of sight the way a teenager’s parents may leave him to make hard decisions on his own, because that’s the only way he’ll learn. They’ll bail him out if they need to, but it’s better for him to let him try.

The ones wanting us to suffer may want to push us around, without our realizing it. Like the internet troll and the guy at the office who likes getting people angry at each other. In C.S. Lewis’s Screwtape Letters, the elder devil explains to the younger that they want to make men materialists and skeptics, who don’t believe in the supernatural, so of course they stay out of sight.

Suppose the spirits mostly hide themselves. In that case, the evidence will be partial, indirect. We can read it in different ways. But — this is the important thing — still evidence. Gardner ignores evidence he should take seriously, in the experience of mankind.

The evidence that Gardner should take seriously is human testimony to the experience of angels and demons. Back to the Chesterton Gardner and I both admire. In his great book Orthodoxy, he explains that he believes in miracles “upon human evidences, as I do in the discovery of America.” What he says about miracles applies to angels and devils.

Skeptics claim to reject the supernatural because they look at the facts, while believers believe in them because their religion tells them to. That’s what Gardner thinks.

Arguing in a Circle

To reject such testimony “can only mean one of two things. You reject the peasant’s story about the ghost either because the man is a peasant or because the story is a ghost story. That is, you either deny the main principle of democracy, or you affirm the main principle of materialism — the abstract impossibility of miracle.” Christians accept the evidence. Rationalists refuse to.

Gardner doesn’t argue for his claim that angels and devils don’t exist. He asserts it as if it were self-evident. Obvious. What every sane person believes. Not worth arguing about. But why? On his own grounds as a rational man, why? How does he know? Why doesn’t he just say, “I don’t know”?

Chesterton had an answer for Gardner: “All argument against these plain facts is always argument in a circle,” he says.

If I say, “Medieval documents attest certain miracles as much as they attest certain battles,” they answer, “But medievals were superstitious”; if I want to know in what they were superstitious, the only ultimate answer is that they believed in the miracles. If I say “a peasant saw a ghost,” I am told, “But peasants are so credulous.” If I ask, “Why credulous?” the only answer is — that they see ghosts.