Rebecca Funkhouser had a serious long-boarding accident. She says that while she doesn't see the big picture, the 'little pieces' God gives her provides encouragement and hope. 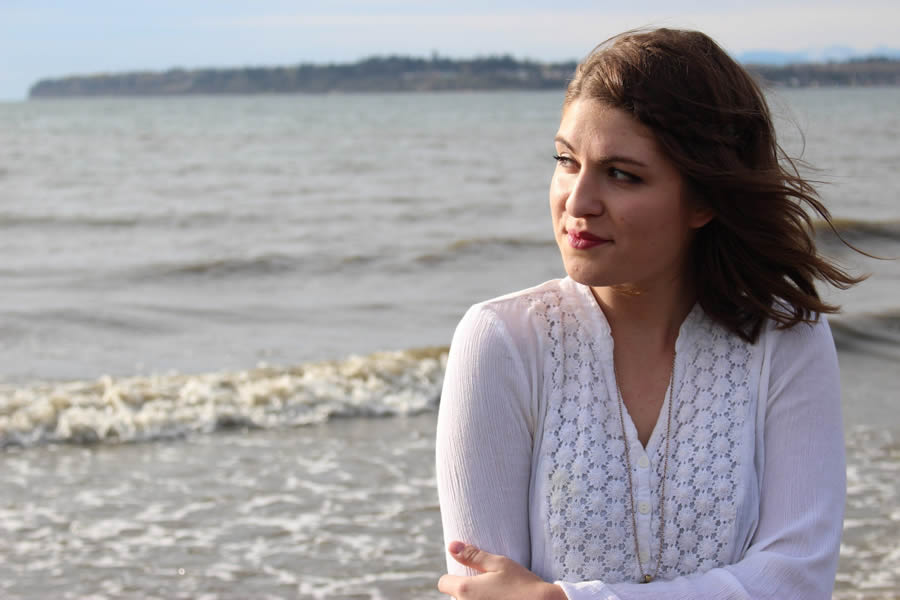 Rebecca Funkhouser doesn’t remember the accident. On a spring day earlier this year, Rebecca and her boyfriend, Joey, were long-boarding down a hill when it happened. She remembers her long board wobbling. Then nothing.

Her eyes rolled back in her head. She began convulsing, and foaming at the mouth and bleeding from her ear and nose. Joey pulled out his phone to call 911, but there was so much blood on his hands that he couldn’t get the phone to work. He had to wipe the blood from his hands to dial 911.

A woman drove up beside them. She grabbed a pillow from her car for Rebecca and stayed with Joey until paramedics arrived. She then drove Joey to meet his parents, who took him to the hospital. Shortly after Rebecca reached the local hospital, they airlifted her to a large trauma center.

Rebecca sustained three cranial fractures and a traumatic brain injury (TBI). She ended up in the hospital for eight days — a much shorter time than the doctors and her family expected. Rebecca kept suffering severe symptoms for several weeks. That time included another ambulance transport to the trauma center. Her mom, Sandy, wondered if she may have been released from the hospital too soon.

According to the Brain Injury Association of America, at least 5.3 million Americans live with a TBI-related disability. Brain damage involving frontal or temporal lobes of the brain can cause confusion, memory loss, poor organizational skills, disinhibition, poor reasoning skills, and judgment. It can change the individual dramatically.

Unlike bones or muscle tissue, the neurons in the brain do not mend themselves. New nerves do not grow in ways that lead to full recovery. In fact, certain areas of the brain can remain damaged, and the functions those areas controlled may be disrupted for the rest of the person’s life.

These folks need co-workers, friend, family, and church members who are willing to come alongside them, to care about their struggles, offer physical help, to have patience with them, to invest in their lives, and to pray with them and for them.

Before the accident, Rebecca had an outgoing personality. “She had a zest for life,” said Sandy, “and loved interacting with people.” Now she suffers from anxiety when talking to strangers or going out in public.

She also exhibits other symptoms of a TBI: stimulus overload, light and sound sensitivity, memory issues, and reading and tracking difficulties. But others don’t see it. “Because Rebecca’s injury isn’t obvious (like a broken arm in a cast), and because she appears to be functioning normally, people may believe that she’s healed or well. Unfortunately, they cannot see the brain-related struggles and emotional challenges she faces on a daily basis,” said Sandy.

But Rebecca is working hard to overcome the TBI. She decided she needed a haircut. She chose a random salon and a random hairdresser. The day before the appointment, she almost canceled, but pushed through her anxiety. Sandy took her to the appointment and explained to the hairdresser that Rebecca had an accident five weeks prior. She asked the stylist, named Esther, to be careful while doing Rebecca’s hair because of her cranial fractures. She then left to run some errands.

After Sandy left, Esther asked Rebecca what happened. Rebecca told her that she’d had a long-boarding accident. Esther’s eyes widened. “I was there!” she said. Rebecca realized that Esther was the woman who stopped at the accident scene, brought her a pillow and stayed with Joey until the ambulance arrived. She was the woman who drove Joey to meet his parents.

Sandy wrote about the incident on her Facebook page. “What are the chances of Rebecca having her as a hair stylist? Random? I think not!” She added that Esther  had prayed for Rebecca every single day. She had members in her church pray for Rebecca.

What Gets Them Through

Both Sandy and Rebecca hold onto their faith for strength. “I can’t imagine going through life events like this one without the knowledge that God is in control,” Sandy said, “that He loves us unconditionally, and that He cares about every detail of our lives. … Throughout this event, He gave my husband and me that peace which surpasses all understanding.”

Rebecca agrees. “There have been many times where I lie in bed, trying to take a nap, just crying out to Jesus.”

It is unnerving to not remember a chunk of your life, wondering why or how the accident occurred, and dealing with a lot of discouragement in the slow — to me — healing process. But God reassures me that He has a plan for my life, even though I can only see today. I don’t see the big picture or plan for my life, but He does. Sometimes God gives us little pieces. … I look for those pieces for encouragement. I hope that He can somehow use this story for His glory.

And God does not disappoint. Rebecca and her parents have experienced God in different ways throughout the process.

“There have been so many prayers lifted up to Heaven on behalf of Rebecca, Joey and our family,” said Sandy. “Prayer carried us through those hospital days and the rough weeks that followed. There was peace and rest throughout this exhausting ordeal.”

“Prayer has been huge!” said Rebecca. “The amount of encouragement I’ve received through prayer, notes, and texts, stating that people have been praying, motivates me to keep going. … I know that God is prompting people to pray and send notes of encouragement to remind me that I’m not alone on this journey.”

The biggest encouragement? God putting Esther in Rebecca’s life. “That blew me away, knowing that this whole church — that had never met me — was praying for me every day. The span of prayer went to many different states.”

Healing has been tough. “The thing about a brain injury is that there are a lot of ups and downs,” said Rebecca. “Three steps forward and two steps backward. It can be very discouraging, but at the same time I am encouraged, because I am moving forward. Each day is different.” She added:

“But God has been putting in my mind the thought that, in the big scheme of things, I really have it easy, because there are people who are going through so much more than I’ve experienced and suffering so much more than I am. I’m fortunate in how this situation turned out. I am truly blessed.”