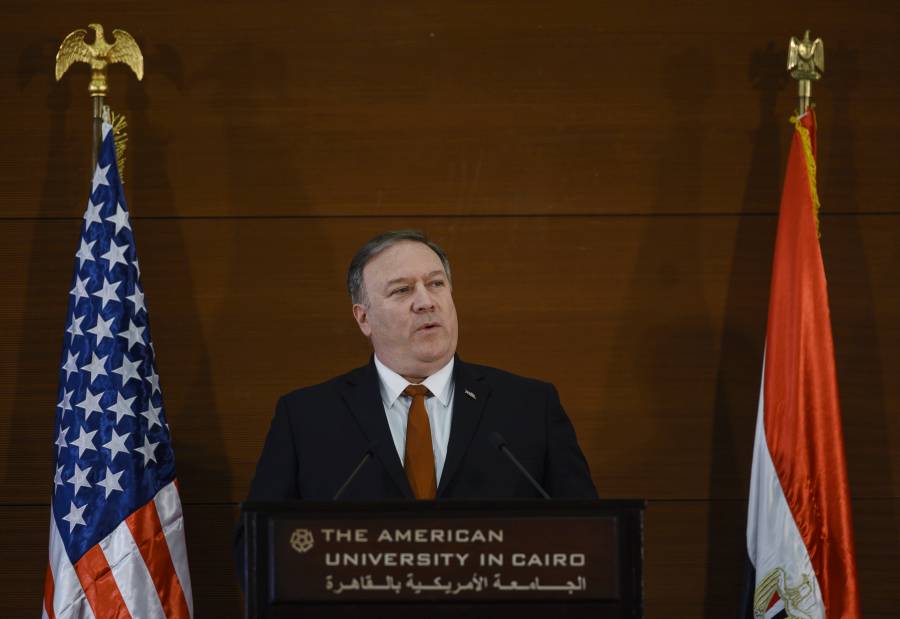 Secretary of State Mike Pompeo speaks to students at the American University Cairo, in the eastern suburb of New Cairo, Egypt, east of the capital, Thursday, Jan. 10, 2019.

From the moment I first met Donald Trump to the day after his election to now, the President has told me and others with force “Keep me surrounded by prayer and wisdom.”

This morning we saw a manifestation of the wisdom around the president and an answer to prayer.

Secretary of State Mike Pompeo delivered one of the greatest, most important speeches I’ve heard in my life. He spoke the truth, the whole truth and nothing but the truth! It was wisdom from above and an answer to the prayers of those who know and love the one who is The Truth.

“A Force for Good”

In Cairo, the very city where our previous president had launched his “apology” tour, Secretary Pompeo did what Obama could but would not do: Declare “America is a force for good in the Middle East. Period.”

Pompeo opened by acknowledging God; that Christians, Muslims and Jews are all the children of Abraham. He stated clearly, “I am an evangelical Christian.” He spoke of the Bible that lays open in his office.

The age of self-inflicted American shame is over, and so are the policies that produced so much needless suffering.

And then he got to the heart of his speech, a powerful rejection of the Obama doctrine of blaming America for the ills of the Middle East.

“Remember,” said Pompeo, ” It was here, here in this very city, another American stood before you. He told you that radical Islamist terrorism does not stem from ideology. He told you 9/11 led my country to abandon its ideals, particularly in the Middle East.”

“In falsely seeing ourselves as a force for what ails the Middle East, we were timid about asserting ourselves when the times — and our partners — demanded it.”

“When America retreats, chaos follows,” he said. The results of our retreat — our “leading from behind” as Obama famously put it — were catastrophic.

Pompeo spoke of the blood-thirsty rise of ISIS as America stood by. How many died or were displaced? I weep for the hundreds of thousands brutalized and terrorized during that caliphate’s reign. A demonic army that never should have been allowed to rise.

He spoke at length about Iran, it’s increased aggression and terrorist activities, the direct result of sanctions relief. He noted the terror group Hezbollah’s increased grip on Lebanon under the Obama administration’s nose and the danger that had posed to Israel’s security.

This all changed with the election of President Trump:

The age of self-inflicted American shame is over, and so are the policies that produced so much needless suffering. Now comes the real ‘new beginning.’ In just 24 months, actually less than two years, the United States under President Trump has reasserted its traditional role as a force for good in this region, because we’ve learned from our mistakes. We have rediscovered our voice. We have rebuilt our relationships. We have rejected false overtures from enemies.

Pompeo also spoke of faith and growing ties between Israel and the Arab world.

Who could’ve believed a few years ago that an Israeli prime minister would visit Muscat? Or that a Roman Catholic pope would visit this city to meet with Muslim imams and the head of the Coptic faith?

Indeed, straight after his speech Secretary Pompeo drove out to the spectacular new Coptic Christian cathedral 30 miles outside Cairo.

Is it a wonder I am enthused and optimistic about all that God is doing?

Meanwhile, here at home in Texas, President Trump has traveled to our southern border. Like Pompeo’s speech, the President’s Oval Office address Tuesday night was wise and an answer to prayer. His final line was perfect: “When I took the oath of office, I swore to protect our country and that is what I will always do. So help me God.”

As the president continues to pray for help and guidance from God, we too must continue praying for him. What President Trump shared with the nation about the humanitarian and national security crisis at our border is very legitimate. The suffering and human cost are not manufactured. To say the toll in lives and treasure is not real is a lie straight from the Enemy.

Failure to protect our borders with every available means possible is foolish, suicidal nonsense. It’s like leaving the doors and windows of our homes unlocked and insecure with known pedophiles, rapists, robbers and drug peddlers cruising our neighborhoods. Our failure to secure the borders now is to allow continued death, suffering and chaos.

It is to give a free pass to drug lords, child abusers and human traffickers. It is to continue exploiting migrants, pushing them on a dangerous path that breaks our laws and shoves them into the shadows. It must stop, so help us God.

As Mike Pompeo said, “America is a force for good.” But only when we don’t retreat from doing what is good and right, and wise in the eyes of the Lord.

So please, continue praying to God to bless and protect America, and for the American people to bless God and those He gave his Son to redeem.