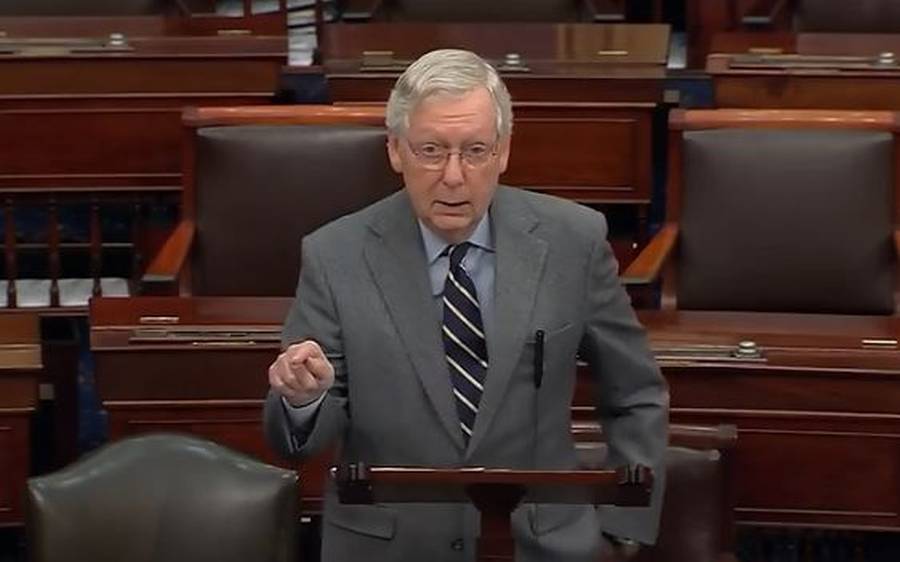 “There is nothing to call this except a threat, and there is absolutely no question to whom it was directed.” So said Majority Leader Mitch McConnell Thursday on the Senate floor in a fierce rebuke of Sen. Chuck Schumer, one day after the Minority Leader’s outrageous remarks targeting Supreme Court Justices Neil Gorsuch and Brett Cavanaugh.

The High Court was hearing its first major abortion case in four years Wednesday, June Medical Services v. Russo. Outside the Supreme Court, the “Shout Your Abortion” crowd was shouting it up at a pro-abortion rally. Sen. Schumer fed the bloodlust, issuing a specific warning to the two Trump appointees by name.

“I want to tell you, Justice Kavanaugh and Justice Gorsuch, you have unleashed a whirlwind and you will pay the price.”

How exactly would Justices who have lifetime terms “pay the price”? Impeachment? Hassled in restaurants by strident shrieking women in p-hats? Bodily harm? Schumer went on:

“You won’t know what hit you if you go forward with these awful decisions.”

The words couldn’t have been clearer had they been in block letters a block high. The Senate Minority leader issued a direct threat to two Supreme Court Justices. They would “pay the price” and get “hit” if they did not decide the Louisiana case … or any other case involving abortion … to his liking.

Justices know that criticism comes with the territory, but threatening statements of this sort from the highest levels of government are not only inappropriate, they are dangerous. All Members of the Court will continue to do their job, without fear or favor, from whatever quarter.

Schumer doubled down. His spokesman Justin Goodman accused Republicans of deliberately misinterpreting the senator’s remarks. He claimed Schumer was talking about “the political price Senate Republicans will pay for putting these justices on the court.”

Really? Let’s go to the tape.

You hear any mention of Senators? Schumer is speaking directly to Gorsuch and Kavanaugh. He’s on their doorstep, with pitchfork in hand. And with a mob behind him.

As if lying about what Schumer said wasn’t enough, Goodman went after Chief Justice Roberts, too!

(Conservative Justices Clarence Thomas and Samuel Alito must be feeling like chopped liver today, not being on Schumer’s hit list. Yet.)

For the record, Trump did not attack Sotomayor and Ginsburg. He simply noted that their hostile comments about him and his appointees revealed their bias, and suggested they should be recused from all cases involving him. President Trump did not threaten them, as Schumer did Gorsuch and Kavanaugh. It’s comparing oranges to rotten apples.

And again, how is quoting Schumer a “deliberate misinterpretation”?

Mitch McConnell isn’t having any of what Schumer was selling. He called Schumer’s comments “astonishingly, astonishingly reckless … and irresponsible.” As for the pathetic attempt to claim Schumer was talking about GOP Senators, McConnell called it an attempt to “gaslight the entire country.” For that matter, he wasn’t impressed Schumer had “stated that he was actually threatening fellow senators, as though that would be much better.”

Added McConnell, “A Senate leader appearing to threaten or incite violence on the steps of the Supreme Court could literally be a matter of deadly seriousness.” He said he had expected Schumer would have apologized. “Instead our colleague doubled down.”

Schumer Regrets ‘The Words’ He Used, But Accuses GOP of ‘Manufactured Outrage’

Schumer followed McConnell onto the Senate floor. There was no apology. All he did was say “I shouldn’t have used the words I did. They didn’t come out the way I intended to.” He also played the New Yorker card. “I’m from Brooklyn. We speak in strong language.”

Of course there was a “but.” There’s always a “but.” “But in no way was I making a threat. I never, never would do such a thing. And leader McConnell knows that. And Republicans who are busy manufacturing outrage over these comments know that.”

He insisted, “My point was that there would be political consequences for President Trump and Senate Republicans if the Supreme Court, with the newly confirmed justices, stripped away a woman’s right to choose.”

Again, go to the tape. What’s worse? What he said? Or his denial he said what he said?

Schumer’s One Moment of Truth

Schumer did say something truthful in his comments this morning: He admitted it’s all about abortion. He faulted McConnell for his “glaring omission” on what the speech was about. “To the women of America, what we’re talking about here, what I’m fighting for here, is your right to choose.”

Even if Justices … and the integrity of the Supreme Court … have to “pay the price.”

Even when it’s the innocent unborn who don’t know what hits them.

We are Being Played. Thoughts About Why We Lost June Medical Services