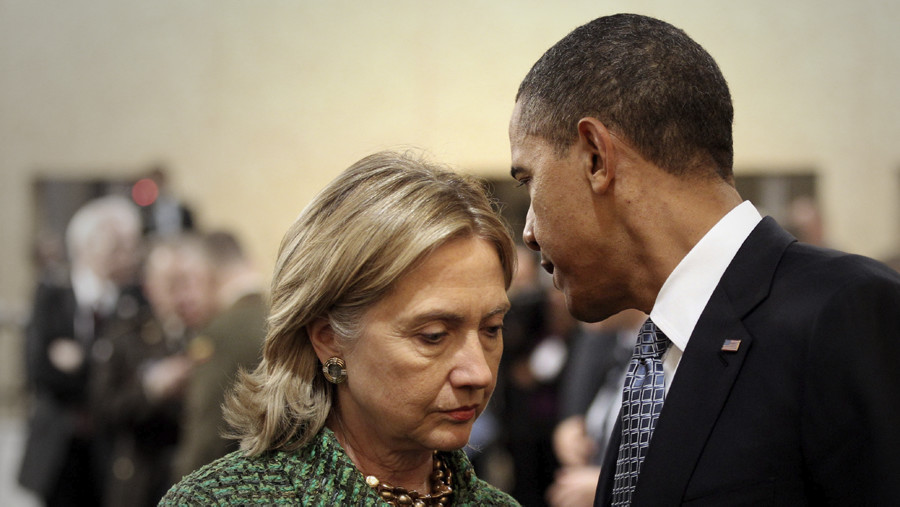 What would you do if you discovered all of Secretary of State Mike Pompeo’s emails were sent in real time to a Russian company?

What would you do if you discovered Pompeo’s people had created the system that may have sent every last email to the Russians?

You’d be horrified. Outraged. Rightfully fearful for the security of the nation. You’d be calling Pompeo a traitor. You would demand Pompeo and his team be prosecuted. And you’d be demanding to know if President Trump knew about it, and if he did you’d insist he leave office immediately.

Now. What if I told you that evidence was released yesterday showing this may well have happened. The secretary of state may have sent all the emails to a hostile foreign policy. But it wasn’t Pompeo and Russia. It was Hillary Clinton and China.

Yesterday, Sen. Chuck Grassley and Sen. Ron Johnson released a staff memo stemming from their ongoing “Investigation of the DOJ’s and FBI’s Handling of the Clinton Investigation.”

The memo tells of the State Department’s desperate efforts to downgrade the classification of information Hillary had handled on her unsecured server. More crucially, it reveals worries the Intelligence Community Inspector General’s office had that Hillary’s emails were dropping real time into Chinese hands … while the FBI could care less. Even when it looked like Hillary’s people were in on it.

First, the memo gives the set up:

In August 2018, news articles alleged that a Chinese state-owned company hacked former Secretary Clinton’s non-government server and inserted code that forwarded nearly all of her emails to the foreign company. The reporting indicated that two Intelligence Community Inspector General (ICIG) officials — Frank Rucker and Jeanette McMillian — discovered the code and brought the possible intrusion to the attention of the FBI.

Senate investigators interviewed Rucker and McMillian. And yes, they did discover the metadata in late 2015 or early 2016. As Ivan Petchoukov reported, “All but four of the 30,490 emails from Hillary Clinton’s unauthorized email server were forwarded to a private Google email address featuring the name of a Chinese company.” That email address was “[email protected]”

ICIG investigator McMillian testified that the address was a live drop box. “Even if you didn’t address an email to this address, the email went to it anyway.”

Her colleague Rucker connected the name to Shandong Carter Heavy Industry Co., Ltd, a Chinese manufacturer. This sent up red flags. (Chinese red, one might say.)

Rucker and McMillian were so concerned about the possible Chinese intrusion they raced to warn the FBI. The ICIG officials told investigators senior FBI leaders “seemed indifferent to evidence of a possible intrusion by a foreign adversary.” In other words, indifferent to how seriously Hillary Clinton may have exposed our secrets to China. And who was one of those FBI leaders? One Peter Strzok, then Deputy Director for Counter-Intelligence. Rucker said Strzok was “aloof and dismissive.”

In his new book Ball of Collusion: The Plot to Rig an Election and Destroy a Presidency, Andrew McCarthy exposes how far the Obama FBI and DOJ went to protect Hillary Clinton in the 2016 election. This is one of the most sickening examples.

Let’s rehash where we are at this point. Virtually every single email sent to or from Hillary Clinton while she was Secretary of State could have gone to the Chinese. That’s not just Hillary’s yoga routine or details about Chelsea’s wedding. (Though the Chinese would likely enjoy knowing Jeffrey Epstein’s madam Ghislaine Maxwell was on the guest list.) We are talking about the most sensitive, highly compartmentalized information in the U.S. government. At least 22 above top secret, said the ICIG. Some with nformation so classified that even talking about the classification level is classified. All in China’s hands. And Hillary’s protectors at the FBI went “Ho hum.”

When the story broke in 2018, the alleged Chinese intrusion was called a hack. But was it? Deep in the report Grassley released yesterday, you find something even more ominous. Hillary’s people created the system that sent her emails to [email protected]

Combetta’s lawyers claim the Carter Heavy Industries name was made up. Plucked out of thin air. Had nothing whatsoever to do with the Chinese state-owned company with the same name. Total coincidence. Combetta refused to be questioned by DOJ IG Horowitz in his study of the Clinton investigation. He also claimed not to have any relevant documents.

Let’s be real, though. If all you’re doing is creating a drop box to innocently transfer a bunch of Hillary’s emails from one place to another, is “Carter Heavy Industries” the dummy name you are coming up with? Not “HRC Archive,” “PNR Transfer” or “Pantsuit Express” or heck, some character from The Avengers? And why are you waiting two years to use it? What’s going on in the meantime? And, most tellingly, why don’t you want to testify about it?

Combetta has a history of clamming up. The Secret Service doesn’t protect Hillary like this cat does. He’s the guy who used “Bleachbit” to destroy Clinton’s emails, despite an order from Congress to preserve them. In fact, he did it the same day he had a conference call with Clinton fixer Cheryl Mills and Clinton lawyer David Kendall.

DOJ IG Horowitz lit into Combetta. “With respect to Combetta, we found his actions in deleting Clinton’s emails in violation of a Congressional subpoena and preservation order and then lying about it to the FBI to be particularly serious.” So why wasn’t Combetta charged? Because Obama’s DOJ “chose to grant him immunity instead of charging him with obstruction of justice or making false statements.”

Why was he granted immunity? You’d think he’d only be granted immunity if he was to finger whoever told him to destroy the emails. If he revealed what Mills and Kendall told him the day he did it. Nope. He took his immunity. Finally admitted he destroyed the emails. Then decided he couldn’t remember what Hillary’s lawyers told him. (Read Andrew McCarthy’s article on the matter. See if you would trust Combetta as far as you could throw him.)

No Proof China Got the Emails, But Proof Obama FBI Didn’t Care

Let’s be clear: The ICIG investigators believe Carter Heavy Industries is linked to a Chinese state-owned trucking company. They suspect the Hillary emails were being routed to someone else, but they could not prove conclusively it was happening. Ultimately, as the Washington Times reports, “Senate investigators were unable to determine if the Carter Heavy Industries email was evidence that Ms. Clinton’s server was hacked.”

What we do know is the Comey-Strzok FBI had zero interest in finding out whether Hillary had created a direct gateway for China to access all her secrets. We know for a fact she left her server exposed when she used her unsecured phone while in China to call President Obama. We know Comey watered down this fact in his fabled Hillary Exoneration.

Here’s what else we know: When the ICIG’s office started looking into Hillary’s emails, they didn’t get support from above. In fact, after former Inspector General Charles McCullough told James Clapper they had found 22 emails beyond top secret in Hillary’s emails, he and his team were threatened and marginalized. Even his family. McCullough told all to Fox News’ Catherine Herridge.

Which gets directly to the question: Why wouldn’t the FBI want to look into the China threat? Why did the hammer come down on the ICIG? We began with our hypothetical situation with Mike Pompeo and President Trump. So we have to ask, “Where — if anywhere — is Obama in all this?”

In an excerpt from his book Ball of Collusion, Andrew McCarthy recalls how President Obama interfered in the Hillary investigation. Obama invented the notion that “intent” to harm national security was required to prosecute her for exposing the nation’s secrets. Then he pooh-poohed the notion any damage was done (though no intelligence assessment had been conducted). He even dismissed the claim the emails were that sensitive. “There’s classified,” Obama scoffed, “and then there’s classified.” Another lie. On top of him having denied knowing about Hillary using a private server.

But nobody in DOJ/FBI leadership wanted to dig too deep. Neither did the Director of National Intelligence Clapper. And not just because there was an election to win. Hillary could not be charged. Period. McCarthy writes, “There was no way on God’s green earth that the Obama Justice Department was ever going to authorize a prosecution involving conduct that would embarrass the president.” If Clinton was never charged, “Obama’s role as a minor participant would not become evidence in a criminal case.”

Who did they all answer to? Where’s the buck stop?

Next time Obama or any of his faithful supporters boasts about “no scandals” during his reign, laugh. And tell them you have a Chinese heavy machinery company to sell them.