“…because they exchanged the truth about God for a lie…” (Romans 1:25) 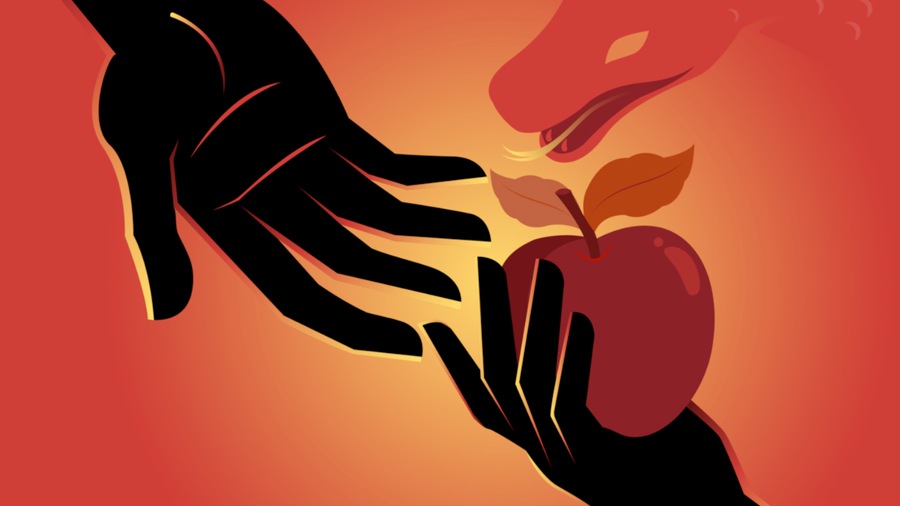 “You won’t die, you just think you will.”

If you don’t recognize this paraphrase, it’s straight out of Eden. In Genesis 3, the serpent comes to Eve in the garden and strikes up a conversation. Perhaps Eve thought the serpent was being friendly, but it’s not long before his ulterior motives are made clear. The serpent had every intention of using Eve to help him overthrow the perfection of Eden. The crafty serpent set out to sabotage God’s plan, doing what he does best: twisting the truth and proposing an exchange.

The first four words out of the serpent’s mouth ­­–– “Did God really say?” –– become the foundation onto which the rest of Satan’s lie was built. Satan’s subtle approach was strategic and effective in casting doubt and creating confusion. He only needed the slightest deviation from the truth to launch an enduring false narrative.

Consider Apostle Paul’s word picture written millennia later, “A little yeast works through the whole batch of dough” (Galatians. 5:9). A little doubt, a little confusion, a small but effective dose of misplaced appropriation of God’s own words –– and the clear meaning of what God had spoken regarding the Tree of the Knowledge of Good and Evil is completely lost on Eve.

The Second Adam rejected the insidious exchange that the First Adam chose to accept.

The serpent not only successfully undermined Eve’s belief in what God said, but he also called into question who God was. He wanted to convince Eve to doubt the trustworthiness of God and cement a full breach of the intimate relationship God and mankind enjoyed in the Garden.

It’s as if the serpent said, “If you eat the fruit, you won’t die, you just think you will! And get this, God withheld essential information from you: He knows that once you taste, your eyes will be wide open, and you’ll be just like Him!”

Moments later, we watch mankind bite into Satan’s insidious exchange, trading eternal truth for an eternal lie. It was a deception so enticing that it led them, first Eve then Adam, into believing that an act of disobedience against God was worth the risk of obtaining an equality with God.

Satan planted a wild seed in the garden of Eve’s mind that day, and she watered it. She rationalized it. She justified it. With that justification, deception’s door was flung wide open — and humanity willingly walked through it. Satan’s psychological war was won.

To build his demonic kingdom, Satan’s strategy of deception was –– and is –– a bait-and-switch “Plan A” from the start. He used the beautiful, fragrant fruit to get man to act on his own lust. But the fact is that it was never about the fruit at all.

Satan used the fruit to use Eve. Satan was after Adam and Eve’s “buy-in” by which he would effectuate the power grab from God’s Kingdom to his own. Satan’s cosmic plan is always to co-opt what belongs to the Lord alone ­–– His power, His authority, His glory –– and transfer it to himself. To get what he wants, the devil lures us with the false premise (“you will be like God”) that drives his own war against God.

Those who “buy-in” are deceived into thinking that Satan’s empty promises to them will fill what the human heart desires: status, knowledge, power, safety, love, acceptance –– these and all the other nothing-new-under-the-sun roots of idol worship. Yet one glaring impossibility remains in Satan’s demonic plan: he can never deliver on his twisted promises, and he knew that from the start. All Satan can offer is a temporal counterfeit to God’s “real thing.” Those who buy-in become enslaved pawns in the Prince of Darkness’ supernatural war against God. In the meantime, multitudes are deceived, walking away empty-handed, as Satan breaks promises and appropriates whatever glory he can to himself.

The Victory of the Second Adam…

From the moment mankind exchanged life-for-death and truth-for-lie in Eden, God knew that He would send His only begotten Son, Jesus Christ, to redeem humanity’s deviated narrative. Through his sinless life, death and resurrection, the Second Adam ­­would do what the First Adam did not do.

There is no better example to illustrate Jesus’ triumph over Satan’s insidious exchange than His response to being tempted by the devil in the wilderness. In stark contrast to Adam and Eve, Jesus saw that Satan –– though he came at Jesus quoting Scripture –– was perverting the Word of God to get Jesus to compromise His obedience to the Father. Jesus discerned the devil’s twisted motives and defeated him through obedience and rightly dividing the Word of Truth.

Where Adam ingested the lie that equality with God was desirable, Jesus did the opposite. He honored the Father, and though being “in the form of God, [Jesus] did not count equality with God a thing to be grasped” (Philippians 2:6). Herein lies a fundamental difference between the First Adam and the Second. The First Adam swallowed a deception because it promised him something that was never meant to be his, while The Second Adam was content to serve, glorify, and worship the Lord alone (Matthew 4:10).

When Jesus informed Satan of this, then the devil left him. Satan could not deceive, lie to, beguile, or sabotage Jesus into worshiping a substitute for Almighty God. The Second Adam rejected the insidious exchange that the First Adam chose to accept.

…Is Our Victory, Too

While no one sets out to be deceived, it seems as if our world is going through one insidious exchange after another as foundations of truth are being dismantled and replaced with substitutes. As believers, we can take heart.

Through Jesus Christ, we “may become partakers of the divine nature, having escaped the corruption that is in the world because of sinful desire” (II Peter 1:4). We are no longer slaves to the sinful nature and therefore need not fall prey to the lures of deception all around us.

As false teachings and deceptive ideologies ebb and flow with the tides of popular opinion, we are not called to be swept away in the cultural rip currents. We can ask for wisdom, hold fast to the Head, which is Christ, and consider ourselves crucified with Christ, so that His life runs through us.

He who is Truth will cause us to stand against Satan’s insidious exchange.