Sarah Palin Should Win Because the New York Times Should Lose 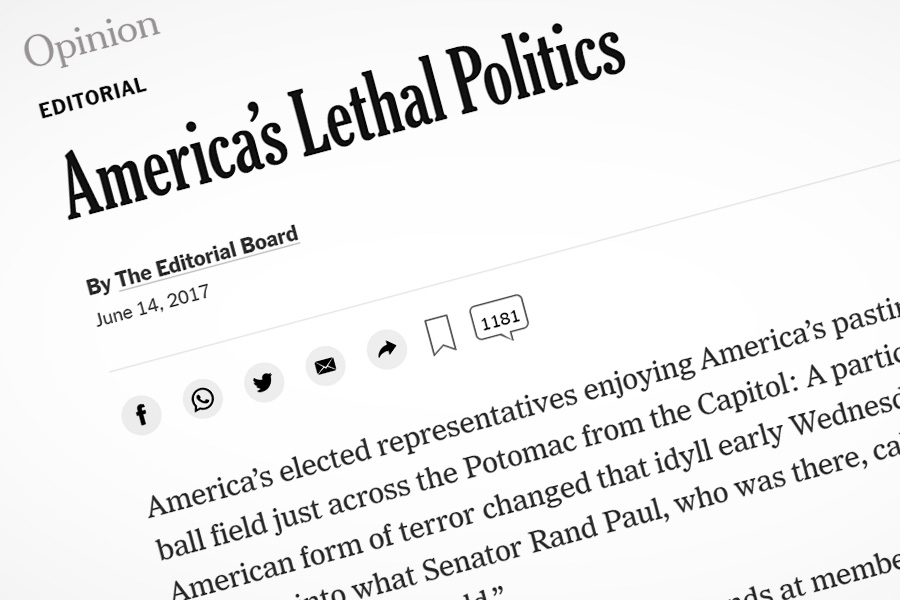 Between the writing of this article and its publication, the judge in the case dismissed Sarah Palin’s libel suit against the New York Times. She didn’t, he said, show that the newspaper acted with malice. He let the jury deliberate in case a higher court overrules his decision. He did say that he was “hardly surprised” that Palin sued the newspaper. “I think this is an example of very unfortunate editorializing on the part of the Times.”

As the jury deliberates her case, I can only feel sorry the New York Times is the only defendant Sarah Palin sued. I wish she would go after every outlet that ever defamed her.

Media manipulation has a tipping point. Normally half the country, particularly Boomers who have trusted legacy media all the lives, follow whatever narrative the mainstream media feeds them. The other half doesn’t. The tipping point comes when the lies are so thick that even that half of the country starts to cave.

Maybe the Palin trial will be another tipping point — but in the other direction. If she wins, maybe the mainstream media will see the need to speak fairly of conservatives.

Here’s the story: Palin objects to a Times editorial titled “America’s Lethal Politics.” It was written in response to the June 2017 shooting of Republican congressmen playing baseball. The newspaper’s editorial page editor rewrote it under a deadline.

“The original draft,” the Washington Post reports, “took note of a campaign map published by Palin’s political action committee in 2011 that placed stylized crosshairs over several Democratic congressional districts, including the one in Tucson where then-Rep. Gabrielle Giffords was later injured in a mass shooting that killed six people. But Bennet [the editor], in his edits, drew a direct line by inserting the phrase ‘the link to political incitement was clear.’”

The Times removed the sentence the next day. Of course the editorial had been widely read by that time. The damage to Palin’s reputation was done.

Trump, the Park, and the Media Frenzy

I saw one little line, once, buried in a Wall Street Journal article, that the Park Police had issued a statement denying that story. But every other outlet simply reported it as fact. They didn’t even mention the White House and the Park police disputed the claim. They simply declared that Trump did it.

No context. Nothing about how the rioters had vandalized the church, a historic building where George Washington had worshipped, a day or two before. People were only angry at Trump.

That was the tipping point. That was when people on my own side of the fence, local colleagues in the pro-life movement, turned on Trump. I think it was the moment that cost him the election.

And it was a lie. The Biden Administration later published the results of an investigation showing that what the media reported as fact was false. But the damage was done.

Palin, Giffords, and the Hardened Narrative

In Palin’s case, it was the Gabby Giffords shooting. Again, it’s the New York Times on trial here. But this outrage began with Keith Olbermann on MSNBC and quickly solidified into a narrative.

When Giffords was shot, Olbermann dug up that image Palin used in an ad with targets on Democrat districts she wanted to win, and accused her of fomenting the violence. Never mind that the shooter was some left-wing nut. Never mind that political campaigns on both sides have always used martial images. Including putting targets on their targets.

The narrative stuck. People who had given Palin the benefit of the doubt up until then turned on her. Her reputation was never the same. It was a tipping point.

Why I Hope Palin Wins

All of this — the false narratives, the flat-out lies, and the cheesy excuses — is why I hope Palin wins the suit. She has been lied about. The media do need to be held to higher standards as a result.

But I want her to win for another reason. It’s the particularly manipulative way the press and liberal politicians twist the narrative. When they’re caught with their hands in the cookie jar, they try to make everyone think conservatives are just as guilty.

Recall, too, the context of the Times editorial. It was the shooting of Congressman Steve Scalise by a Bernie Sanders supporter. One of their own tried to kill people he disagreed with. The mainstream media keep warning about the dangers or rightwing violence and claim regular Republicans are encouraging it.

What to do when one of your own people upsets that narrative? Don’t take the blame. Don’t look at your own inflammatory rhetoric. Point fingers at the other side. The Times dredged up the old libel against Palin to make it seem as if each side was equally guilty of encouraging violence.

In fact, not equally guilty. More guilty. The Bernie supporter was just an odd ball. Every movement has people like that at its fringes. But Palin, the Times suggested, encourages them. She wants people like that. And she’s a typical Republican.

The Left is Worse

We do have our verbal bomb throwers. But as someone who has been on the receiving end of it, including death threats, I say the Left is worse. Far worse, in fact, partly because they are the ones who control the narrative. They can so easily hide the sins of their own people and exaggerate the sins of conservatives.

So good luck, Gov. Palin. I hope you win. And I hope the Times loses. We might get a more honest media if it does.

Peter Wolfgang is president of Family Institute of Connecticut. He lives in Waterbury, Connecticut, with his wife and their seven children. The views expressed on The Stream are solely his own. His previous article was The Single Biggest Danger in Stephen Breyer’s Retirement, which is Pete Buttigieg.