Santa is an Anagram of Satan. True, But the History of St. Nicholas is Divine. 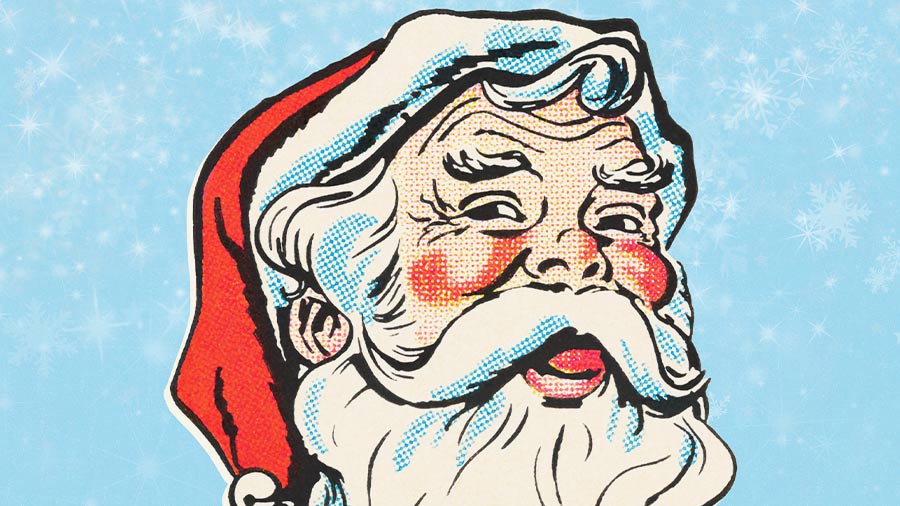 By Dwight Longenecker Published on December 22, 2021 •

I once heard a preacher get down on jolly old St. Nick. He was inveighing against America’s icon of mid-winter materialism calling him a “fat pagan elf” who had no place in a Christian celebration of the birth of Jesus Christ. He was serious when he pointed out that the very name “Santa” is an anagram of Satan.

Santa may be an anagram of Santa, but that’s not where the name Santa comes from. Instead the transformation of Saint Nicholas from a fourth century bishop from Turkey into the modern Santa Claus is a fascinating tale in its own right.

Who Was Good Ol’ Saint Nick?

St. Nicholas was famous for his generosity to those in need, his love for children, and his concern for sailors and ships. He died December 6, A.D. 343, in the Turkish city of Myra and was buried in the cathedral church. Because he died on December 6, the early Christians chose that day to remember Nicholas. And because his day was close to Christmas, the celebrations in his memory were eventually blended with Christmas festivities.

Among other things, St. Nicholas became the patron saint of seafarers. The first Europeans to arrive in the New World were Catholics, so they sailed with St. Nicholas as their patron. It’s not surprising therefore to learn that on his first voyage, Christopher Columbus named a Haitian port after St. Nicholas on December 6, 1492. And in Florida, the town now named Jacksonville was first called St. Nicholas Ferry by the Spanish explorers.

St. Nicholas was famous for his generosity to those in need, his love for children, and his concern for sailors and ships.

The Northern Europeans also celebrated St. Nicholas in various ways. The Dutch pictured St. Nick as a man on horseback dressed as an Eastern bishop in red vestments and flowing white beard processing through the streets or riding across the rooftops to drop gifts down chimneys. Remembering Nicholas’ gifts of gold to redeem children about to be sold into slavery, the Dutch celebrations included parties with childish high jinks and gifts of nuts, apples, and sweets placed in shoes and stockings left beside beds before the hearth.

How did St. Nicholas get into mainstream American culture and Christmas customs? Historians believe it was German immigrants in Pennsylvania who kept their own celebrations. They were called “Pennsylvania Dutch” — the “Dutch” meaning “Deutsch” or “German” rather than the “Dutch” from the Netherlands. It was from Pennsylvania that the St. Nicholas celebrations made their way to New York and only after American Independence did the Netherlander Dutch in New York begin to remember and celebrate their heritage.

The St. Nicholas Center website reveals that “John Pintard, the influential patriot and antiquarian who founded the New York Historical Society in 1804, promoted St. Nicholas as patron saint of both society and the city. In January 1809, Washington Irving joined the society and on St. Nicholas Day that same year, he published Knickerbocker’s History of New York, with humorous references to a jovial St. Nicholas.”

Irving’s St. Nicholas was not an Eastern Orthodox bishop, but a mischievous Dutchman with a clay pipe. The author’s imagination places St. Nick in Dutch New Amsterdam (New York). And for the first time, St. Nicholas is imagined to drop down chimneys to give gifts to kids. When the New York Historical Society held its first St. Nicholas celebration on December 6, 1810, Pintard got artist Alexander Anderson to create an image of the saint filling stockings by the fireplace.

The Birth of Santa Claus

The idea caught on. Eleven years later, publisher William B. Gilley brought out Sante Claus, The Children’s Friend. His poem featured a sleigh with flying reindeer and he gave St. Nicholas the role of children’s judge. Now the saint “had a list and was checking it twice.” He was “gonna find out who’s naughty or nice.” Two years later, the new St. Nicholas mythology was consolidated with the hugely popular poem A Visit from St. Nicholas, now known as The Night Before Christmas. The image was complete, for Santa was now …

Dressed all in fur, from his head to his foot,
And his clothes were all tarnished with ashes and soot;
A bundle of toys he had flung on his back,
And he looked like a peddler just opening his pack.
His eyes—how they twinkled! his dimples how merry!
His cheeks were like roses, his nose like a cherry!
His droll little mouth was drawn up like a bow,
And the beard of his chin was as white as the snow;
The stump of a pipe he held tight in his teeth,
And the smoke it encircled his head like a wreath;
He had a broad face and a little round belly,
That shook, when he laughed like a bowlful of jelly.

Then in 1863, cartoonist Thomas Nast began a series of annual black-and-white drawings inspired by the poem. By this time, a linguistic shift had happened. The German version of Saint Nicholas was “Sankt Niklaus” and the Dutch was “Sinterklaas.” In American English these became “Sancte Claus,” then “Santa Claus.”

By the 1920s, well known illustrators N.C. Wyeth and J.C. Leyendecker had produced lush, realistic portrayals of the red suited, white bearded, rotund elf. And by the 1930s, Norman Rockwell followed their lead in his covers for The Saturday Evening Post. In 1931, artist Haddon Sundblom linked Santa with Coca-Cola, and for thirty five years the red-suited Santa was famous for refreshing his thirst with Coke before visiting another home in his endless Christmas Eve adventure.

This image of the fat, soda swilling elf dominated the American imagination, so millions of American kids never knew of saintly St. Nicholas. They only knew the jolly fat man on whose knee you sat to whisper what toys you wanted for Christmas before he gave you a candy cane.

That’s how Saint Nicholas became Santa Claus. But there’s no sense being a Scrooge about Santa and saying he’s a form of Satan. Let Santa be a jolly part of Christmas, but let’s not forget St. Nicholas and the true spirit of Christmas that St. Nicholas symbolizes. He was a courageous and good man — a tender hearted lover of the poor and a kindly, generous soul who, in his kindness to children, saw that children are pictures of the Christ who became a little child himself in the stable of Bethlehem.