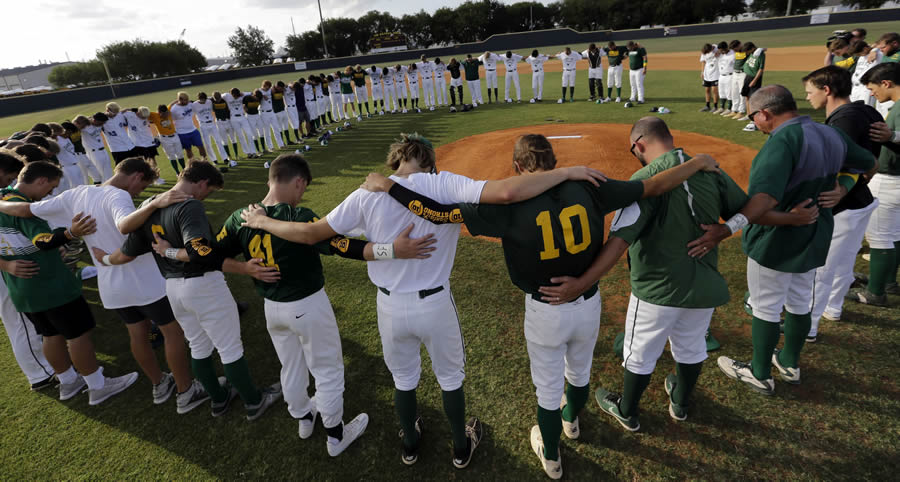 Just one day after the shooting at Santa Fe high school that took 10 lives and injured 13 others, the baseball team decided to take the field to give the community some hope. The regional playoff was originally scheduled for Friday night, but it was postponed. Coaches and parents left the decision up to the team whether or not to play on Saturday. “Coaches and parents said whatever they decided was fine. It’s your decision,” Mike Shubert, Rome’s father, said. “They left the room. [The players] came out about five minutes later and said, ‘Let’s go. We’re playing.'”

Before the game both teams gathered in a circle and prayed together.

There was no fairy tale ending to the ballgame. Kingwood Park won 7-0 and ended Santa Fe’s season. “After everything that happened, it was definitely hard to come out here and be as strong as they were,” Rome Shubert said.

But make no mistake. This was about far more than a game.

Rome Shubert said the team wanted to show the community that they’re stronger than the tragedy. “This kinda shows that we’re … gonna pick each other up and come out here, play, give the community some hope, some life, everything.” Shubert himself is a walking, pitching testimony. He’d been shot in the head and missed being paralyzed by less than an inch.

“I just went from Thursday night, pitching a game, to next day, shooter comes in our room and shoots it up, and I get hit in the head. Friends are getting hit. A couple of people in my class passed away. To come out here and have my team be as strong as they were … I’m really proud of them.”

Shubert said the team had to “dig deep” for strength to play. “Things can bring us down, but we’re always going to come back from it. Nothing’s going to ever drag us down for the rest of time. We’re definitely going to bounce back from everything and come back stronger than ever.”

Santa Fe High School pitcher Rome Shubert, who was stuck by a bullet in Friday’s shooting but survived, talks about his last 36 hours, what it took for his team to play tonight and what he wants everyone to know about Santa Fe, Texas: pic.twitter.com/L9K9f3YApk

Let’s Be an Answer to Jesus’ Prayer

Master Lessons at the Masters