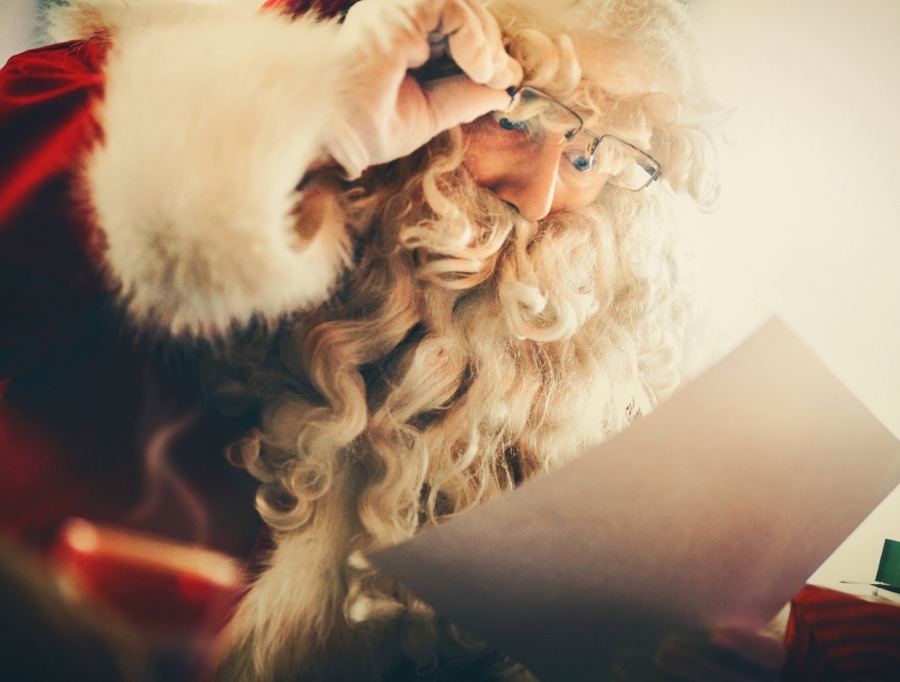 I just decided what I want for Christmas. We can put the Fender Telecaster on hold. Ditto a farmhouse in the countryside with a barn full of calorie-free gingerbread. I want to do something for my country.

I want a dome over the Beltway, an impenetrable barrier that will keep the Swamp Gas from poisoning the rest of us. Sure, I know that’s is a tall order. However, expecting the sultans of the Deep State to do their duty is as likely as Rudolph getting drafted by the Redskins.

Look, I know you’re busy making lists and checking them twice, and loading up the ol’ sled for next week’s big ride, but can you spare a few seconds to check out just what we’ve seen this week?

So, Judge Sullivan repeatedly asked Flynn and his lawyers: Do you want to delay sentencing, were you pressured to plead guilty? (Innocent people get coerced every day, as former prosecutor Sidney Powell wrote Monday.)

Flynn kept answering no. He did not want to delay sentencing. No, he said, the FBI was as pure as the driven snow. What else was he going to say? Swamp Creature Mueller and his political assassins had a gun pointed at his head, and that of his family.

Hours before Mueller handed over the original 302s documenting that Flynn did not lie to the agents sent to interview him, that he was open, eager and thankful, news broke that two of Flynn’s associates were being prosecuted for lobbying for Turkey without having registered as foreign agents. The message could not have been clearer had it been blasted from loudspeakers. “Keep to the script tomorrow or we will hit you hard on your activities with Turkey.”

One of Mueller’s prosecutors in court admitted it, in essence. He said Flynn has thus far been cooperating in that case, but could have been indicted. I’d bet you a town full of Christmas cookies that had Flynn told Judge Sullivan he was squeezed like a zit, by Christmas Mueller would have accused him of reneging on the plea deal.

After ripping Flynn for “lying to the FBI” and mistakenly browbeating him for what he had (actually hadn’t) done with Turkey, the judge called a recess, again asking Flynn’s lawyers to consider a postponement. And sure enough, the lawyers came back asking for a postponement until Flynn was done “cooperating” in Mueller’s investigations. (Meanwhile, where are the indictments for Hillary fund-raiser Tony Podesta? The firm started by Podesta and his brother, Hillary campaign manager John Podesta did the same unregistered lobbying for Turkey that Flynn did. They worked in actual partnership for years with Paul Manafort, and for that matter, pocketed $200,000 in Russian cash to lobby Hillary on behalf of Uranium One. Justice is supposed to be blind, Santa. Apparently, she sees just the color red.)

The only reason Flynn is having his life ruined is because a) He worked for Trump. B) Former Deputy Director Andrew McCabe had a personal vendetta against him. Read former agent’s Robyn Gritz’s letter to the judge. And what of reports of McCabe declaring, “First we f*** Flynn, then we f*** Trump”?

Flynn thinks he’s having a routine chat with agents, as he had been having in his new position, little knowing the perjury trap had been set.  “No need to get lawyers involved,” he was assured by McCabe. A tactic to get Flynn that Comey says he came up with, figuring they could “get away” with it in the chaos of a new administration.

“Get away with.” Pull a fast one. Take advantage of in pursuit of subverting the new president. Execute Strzok-McCabe’s “insurance policy” so quick and easy Comey should change his name to Flo. What a snake. There isn’t enough coal in West Virginia to stuff in his stocking.

In an outburst Monday as arrogant as your suit is red, Comey rejected any responsibility for the FBI’s tattered reputation. Forgetting, of course, that the DOJ Inspector General Michael Horowitz specifically blamed Comey for harming the once-illustrious agency.

Comey’s moralizing and pontificating came after further questioning by the House Intelligence Committee. You read the transcript, Santa? Trey Gowdy exposed how Comey treated Obama’s public interference in the Hillary email investigation compared to how he treated Trump’s private wish to cut General Flynn some slack. Comey had no answers for how Obama would know Hillary’s email shenanigans had not harmed national security if a) Comey was telling the truth that Obama wasn’t updated on the investigation, and b) Given Hillary destroyed so many emails (under subpoena) that remain lost to this day. And funny isn’t it how Comey’s exoneration of Hillary used the exact language Obama had used in TV interviews. Actually, Santa, it isn’t funny.

Here are some stunning revelations that will jingle your bells. Revelations as ignored by the MSM like month-old fruit cake.

First, the reporter whose Steele-fed stories were used by the FBI as justification to give credibility to the Steele dossier admits — now — the whole thing is garbage. Yahoo! News’s Michael Isikoff said in a podcast the other day: “When you actually get into the details of the Steele dossier, the specific allegations, we have not seen the evidence to support them, and in fact, there’s good grounds to thing that some of the more sensational allegations will never be proven and are likely false.”

Second, a Washington Post investigative reporter revealed the FBI and CIA didn’t believe a major dossier allegation concerning Michael Cohen was legit. (Of course, the Washington Post didn’t actually report this. Buried like a bone under a mountain of reindeer droppings. Anything to protect the Trump-Russia Collusion story.)

Third, Comey knew the dossier was unverified months after he signed off on FISA Warrants to spy on Carter Page. (For an excellent rundown on the outrageous malfeasance against Page, see Sharyl Atkisson’s new article, “10 Pieces of Evidence Against the Most Diabolical Russian Spy Ever.”)

Fourth, dossier author and ex-British spook Christopher Steele revealed in a British court case that he had been hired by Hillary’s go-to law firm Perkins Coie to help Hillary challenge the outcome of the 2016 election. The Washington Times has the details. Yes. Hillary Clinton paid a foreign agent to undermine trust in our American elections. And the sky is falling because Trump paid some cash to a woman to not blab about an encounter nobody on earth is surprised he might have had? Glue a red light to my face and call me Rudolph.

On second thought, Santa, a dome over The Swamp is impractical. It may contain the Swamp Gas, but it does not clear the air. It does not stop the Swamp creatures from tunneling out and continuing to abuse American citizens and the American system at will.

So what I really, really want for Christmas is equal justice under the law and truth to matter. I want top government officials not getting away with using their office to destroy political opponents, to sabotage a presidency, to overthrow the will of the American people. I want it understood this nation experienced seditious acts at the highest levels.

We were once gifted with liberty and justice. All I’m asking is for a little re-gifting.

Then we can talk about the Telecaster.