A review of the legendary liberal justice's life and legacy 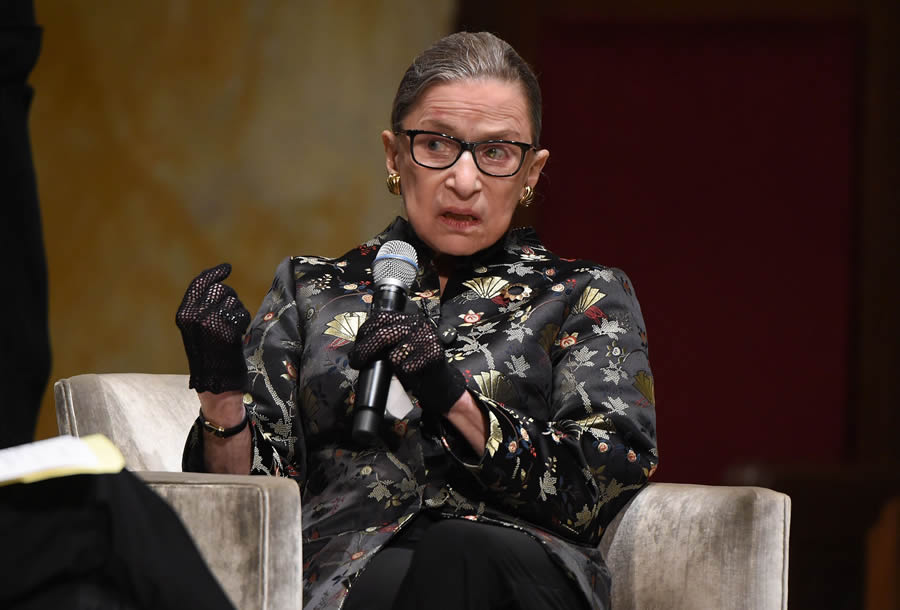 Often called “the Thurgood Marshall of gender equality law,” after the justice who as a lawyer had successfully argued for the over-turning of “separate but equal,” she has long pioneered gender equality under the law. The oldest justice serving on the court, she was also perhaps the most liberal one. The battle over her replacement will be fierce. The justice who replaces her could give the court a 6 to 3 conservative majority.

Due to her fiery dissents and refusal to back down, she developed a reputation as the “Notorious R.B.G.,” a play on the name of rapper The Notorious B.I.G. Ginsburg enjoyed the nickname, and admitted to having a large collection of Notorious R.B.G. shirts she gave to family and friends. She also obtained the nickname “The Great Dissenter” due to her plentiful, strongly worded dissents.

Although they were at opposite ends of the ideological spectrum, Ginsburg considered the late Justice Antonin Scalia her closest friend on the court. They ate dinner and attended opera together. She had known him since they both served on the U.S. Court of Appeals for the District of Columbia Circuit.

Ginsburg graduated from Cornell University with a degree in Government, with the highest grades of any woman in her graduating class. She tied for first in her graduating class from Columbia Law School, where she was one of only a few women. Despite her talent, Supreme Court Justice Felix Frankfurter rejected Ginsburg for a clerkship position because she was a woman. That rejection, she has said, led to her concern with women’s rights. She clerked for a U.S. District Court judge instead.

She became a professor at Rutgers (1963-1972) and Columbia (1970-1982) law schools. Rutgers told her she would be paid less than her male colleagues since her husband had a well-paying job. That must have strengthened her interest in women’s rights.

She was told at Rutgers that she would be paid less than her male colleagues since her husband had a well-paying job.

A strong feminist, Ginsburg advocated for women’s rights and gender equality throughout her career. While at Rutgers, she helped found the Women’s Rights Law Reporter, the first American law journal dedicated to women’s rights issues. In 1972 she helped found the ACLU’s  Women’s Rights Project and later served as its general counsel. She wrote Columbia’s case book on sex discrimination.

In advancing her causes, she was a clever and shrewd advocate. When President Bill Clinton nominated her to the Supreme Court, The New York Times explained: “Ms. Ginsburg adopted a strategy intended to convince the Justices that laws that discriminated between men and women — even those laws that were meant to help women — were based on unfair and harmful stereotypes and were in most cases unconstitutional. To do that, she often used men as plaintiffs, showing that both men and women suffered from such stereotypes.” She “set out to prove that those kinds of laws in fact harmed women by contributing to a stereotyped view of their role,” said a law professor quoted in the article.

In her brief for the 1976 case Craig v. Boren, for example, she argued against a Oklahoma law that let women buy beer at 18 but didn’t let men buy it until they were 21. That case shifted the law on legally distinguishing the sexes. The court created an idea called “intermediate scrutiny.” It meant that a state could not distinguish men from women in the law unless it showed the law advanced a substantial governmental objective.

President Jimmy Carter appointed her to the U.S. Court of Appeals for the District of Columbia Circuit in 1980. The court is known as a training ground for future Supreme Court justices. There she developed a reputation as a moderate. President Clinton nominated her to the Supreme Court in 1993. During her confirmation hearings, she answered some questions, but declined to answer others, saying they referred to issues she might have to rule on. During the confirmation hearing of John Roberts, the future chief justice cited the “Ginsburg precedent” to refuse to answer certain questions.

Ginsberg left a very liberal legacy on the court, with an emphasis on carrying out her views on gender equality. One of her most important opinions was United States v. Virginia in 1996. By a 7-1 vote, the court struck down the public military university’s male-only policy. (Among the conservatives, Chief Justice Rehnquist concurred, Justice Scalia dissented, and Justice Thomas did not participate.)

While serving on the highest court, she announced a new standard for equal protection review of gender classifications, called “skeptical scrutiny.” It favors the female sex only. It “cunningly eliminates all possible justifications for legal distinctions between men and women,” except those that give women “remedial” advantages. While the previous standard of “intermediate scrutiny” had allowed states to legally distinguish men and women if they had good reason to do so, Ginsberg’s new standard did not. It eliminated such distinctions whatever good they served.

In the 2016 case Whole Woman’s Health v. Hellerstedt, the Supreme Court struck down Texas abortion restrictions that would have shut down some abortion clinics. Ginsburg joined in the majority opinion, and also wrote her own concurring opinion. She opined, “It is beyond rational belief that H. B. 2 could genuinely protect the health of women, and certain that the law ‘would simply make it more difficult for them to obtain abortions.’ When a state severely limits access to safe and legal procedures, women in desperate circumstances may resort to unlicensed rogue practitioners … at great risk to their health and safety.”

She didn’t write the majority decision in the 2015 case legalizing same-sex marriage, Obergefell v. Hodges, but she made waves with her statements at the time. She asserted during oral argument, “Marriage today is not what it was under the common law tradition, under the civil law tradition. … Marriage was a relationship of a dominant male to a subordinate female.”

When announcing her dissents from the bench, she wore a specially designed collar with her robe. One of her most famous dissents came in the Hobby Lobby case. Her 35-page dissent inspired a YouTube video and memes. She claimed, “The exemption sought by Hobby Lobby and Conestoga would … deny legions of women who do not hold their employers’ beliefs access to contraceptive coverage.”

In the 2007 Gonzales v. Carhart, she dissented from the majority, which upheld a federal law against partial-birth abortion. She asserted in her dissent that “The notion that the Partial-Birth Abortion Ban Act furthers any legitimate governmental interest is, quite simply, irrational.”

She asserted in 2007, “The notion that the Partial-Birth Abortion Ban Act furthers any legitimate governmental interest is, quite simply, irrational.”

In the 2000 case Bush v. Gore, Ginsburg disagreed so vehemently that she wrote “I dissent” instead of the more collegial “I respectfully dissent” in her dissent. There, the majority of the court agreed with the Bush team to halt a manual recount of the presidential ballots in Florida. Ending the recount allowed Bush to win the presidency.

In Veasey v. Perry, Ginsburg dissented from the majority, which upheld a strict voter ID law in Texas. She claimed in her 2014 dissent that “racial discrimination in elections in Texas is no mere historical artifact.”

Ginsburg has had serious health problems while on the bench, and many thought she might step down within the last few years. She underwent surgery for colon cancer in 1999, but did not not miss a day on the bench. Ginsburg became known for her vigorous exercise routines in later years despite her health issues. She developed pancreatic cancer and underwent surgery for that in 2009. In November 2018, she fractured three ribs in a fall. A scan of her lungs revealed cancerous nodules. They were removed in January 2019, but it resulted in her missing days on the bench.

In May she underwent a non-surgical treatment for a benign gall bladder ailment. In July 2020, she announced her cancer had returned.

Many Democrats wished she would have stepped down while Barack Obama was president, so he could appoint a liberal to replace her. But she wanted to remain a justice as long as she was mentally sharp enough to perform her duties.

In July 2016, she said during two interviews that she did not want to think about the possibility of a Trump presidency. She jokingly said she might move to New Zealand if he became president. She apologized for her remarks later, calling them “ill-advised.”

During an interview with Katie Couric in 2016, she said that Colin Kaepernick not standing for the national anthem before NFL games was “really dumb.” She apologized for the remarks later and described them as “inappropriately dismissive and harsh.”

Her husband died of cancer in 2010. They leave behind two children.