Russell Moore asked the social media giant, 'What is 'abusive' about protesting Planned Parenthood's human trafficking?" His post has now been restored. 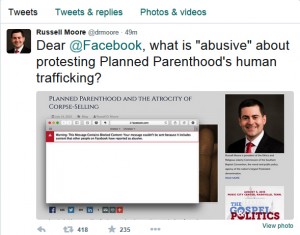 Dr. Russell Moore of the Ethics and Religious Liberty Commission of the Southern Baptist Convention challenged Facebook after the social media service blocked his column about a story and sting video about Planned Parenthood illegally trafficking aborted fetal parts.

We have posted a screenshot of Dr. Moore’s Facebook page and also some of the tweets he sent to legislative leaders urging them to act immediately on this gruesome scandal.

You can read Dr. Moore’s original blog post from this morning here and The Stream‘s summary on the breaking story (including the embedded video) here.
. 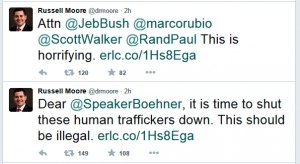