Trump Calls Hillary a Bigot. Rubio: Some of Her Policies ‘Do Harm Minority Communities’ 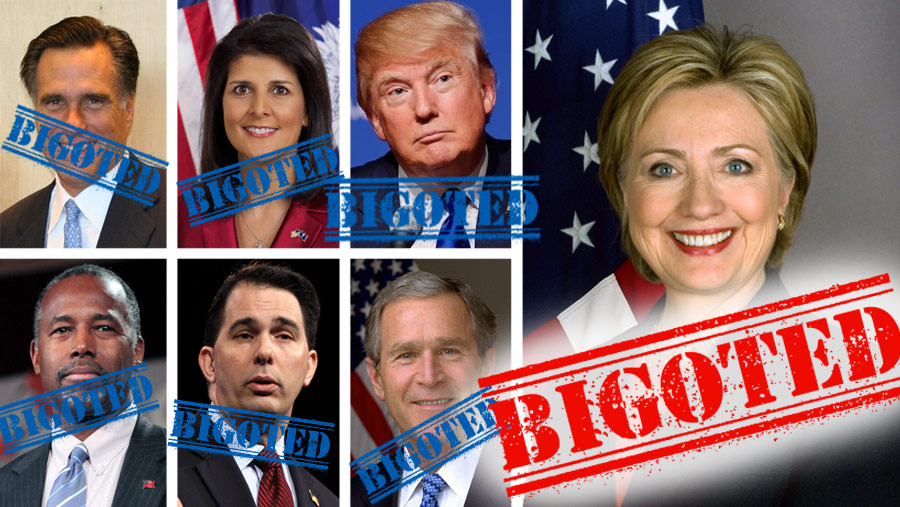 Hours before he won a contested Florida primary, the state’s junior Senator declined to criticize Republican presidential nominee Donald Trump for calling Democratic nominee Hillary Clinton a “bigot.” According to Republican Senator Marco Rubio, Trump is merely turning a long-time Democratic tactic against them, and not without some justification.

“Democrats have been calling republicans a bigot for a long time,” Rubio told CNN reporter Manu Raju. “Some of the policies she stands for do harm minority communities, absolutely.”

“Too far to call her a bigot, though?” asked Raju.

“You have to ask other campaigns about the terms they use,” said Rubio. “I can tell you I don’t want Hillary Clinton to be our president.”

Trump has pivoted his campaign in recent weeks to woo black voters, saying that Clinton is a “bigot” because she doesn’t care about the quality of minority lives in America. “She is a bigot,” he told CNN’s Anderson Cooper. “She is selling them down the tubes because she’s not doing anything for those communities. She talks a good game. But she doesn’t do anything.”

When Cooper asked if Clinton had disdain for blacks, Trump said, “Her policies are bigoted because she knows they’re not going to work.”

Clinton responded in a Thursday speech, twice accusing Trump of “bigotry” and twice accusing him of making a “racial lie.” Many media voices seemed to defend Clinton or downplay the aggression in her speech, even as they reacted strongly to Trump’s accusations.

Trump’s attack is one often heard, but usually it’s Democrats calling Republicans bigots. A quick search pulled up some prominent liberal figures accusing various Republicans of bigoted beliefs of various kinds, including the charge that they hold the same positions as Nazis.

In 2001, the first president of the Southern Poverty Law Center and then-NAACP Chairman Julian Bond — now deceased — compared U.S. conservatives to the Taliban. In 2003, he said of Republicans, “Their idea of equal rights is the American flag and Confederate swastika flying side by side.”

Current U.S. Supreme Court Justice Samuel Alito was accused in his Senate hearings of discriminatory beliefs towards non-whites and women, something that led his wife to leave the hearing in tears and Alito to declare, “I am not any kind of a bigot.”

A 2004 Townhall.com column highlighted many examples of prominent Democrats — among them then-Senator Robert Byrd of West Virginia, himself a former KKK member, as well former U.S. Vice President Al Gore and a federal judge — comparing President George W. Bush or members of his administration to Hitler or to those working for Hitler. This column highlights other examples.

Sometimes the accusations are subtle. Other times, not so much. After a rules debate in the U.S. Senate, one Democratic Senator dialed the rhetoric straight to ten:

“You’re a bunch of dictators, that’s all you are,” Rep. Sam Gibbons (D-Fla.) shouted as he stormed, red-faced, from a meeting room just off the House floor. “I had to fight you guys 50 years ago,” said Gibbons, who fought the Nazis in World War II.

In 2012, the Chairman of the South Carolina Democratic Party compared GOP Governor Nikki Haley — who is of Indian descent — to Adolf Hitler’s girlfriend Eva Braun, this when Haley spoke at a GOP event in Charlotte, North Carolina at the same time as the Democratic National Convention.

There is enough of this sort of thing to compile “A Short History of Liberals Using the Nazi Card” against conservatives.

When they want to be slightly less hamfisted, the American left opts for terms like “fascist” or “racist.” So, for instance, in 2015 a University of Wisconsin sociologist who is now employed by Temple University called her state’s governor, Scott Walker, “and many Wisconsin Legislators” fascists in a tweet. She wasn’t the only one. A Google search for the joint terms “Scott Walker” and “fascist” brings up many options.

Last year, prominent liberal columnist Frank Rich said that Dr. Ben Carson, who is black, appealed to the “racist, bigoted” GOP base when Carson said he might not support a Muslim president. In 2013, Rep. Alan Grayson (D-FL) compared Tea Party activists to the KKK, which led to criticisms from liberals like MSNBC host Martin Bashir, but also praise from liberal commentators — including one who said Mitt Romney was engaging in racism when he told the NAACP in 2012 that some voters want “free stuff.”

Romney, the 2012 Republican presidential nominee, was also accused of bigotry in a Bloomberg column for allegedly forcing a gay staffer criticized by social conservatives to quit his campaign. His predecessor GOP nominee, Senator John McCain of Arizona, was accused of various forms of racism and bigotry in multiple mediums when he ran for President.

President Barack Obama was not above similar rhetoric, accusing Romney in 2012 of wanting to bring America back to its sexist and racist past. Other prominent liberal voices did the same on TV, online and in print, to the point where many Americans may have simply tuned them out.

Media is “Setting Aside Any Concept of Ethics or Neutrality”

Conservative critics of the media’s treatment of Republicans abound. One of them, Dan Gainor of the Media Research Center, told The Stream that “the left and the media use four major strategies to attack either conservative or right-leaning politicians. They claim they are some combination of crazy, evil, stupid and racist. They depicted Reagan as crazy, senile (stupid) and racist. George H.W. Bush had run the CIA, so he was evil. George W. Bush was described as crazy and stupid.”

“The ist words are the most popular ones with the media now — racist, sexist, nationalist, etc.,” continued Gainor. “These are designed to eliminate any debate. One you have been declared ist, you are merely supposed to recant and be silent.”

Gainor concluded, “Liberals and those in the media are shocked that Trump dare criticize Clinton at all. They overwhelmingly have thrown in for her candidacy, setting aside any concept of ethics or neutrality.”

When I Confronted Racism in My Own Family