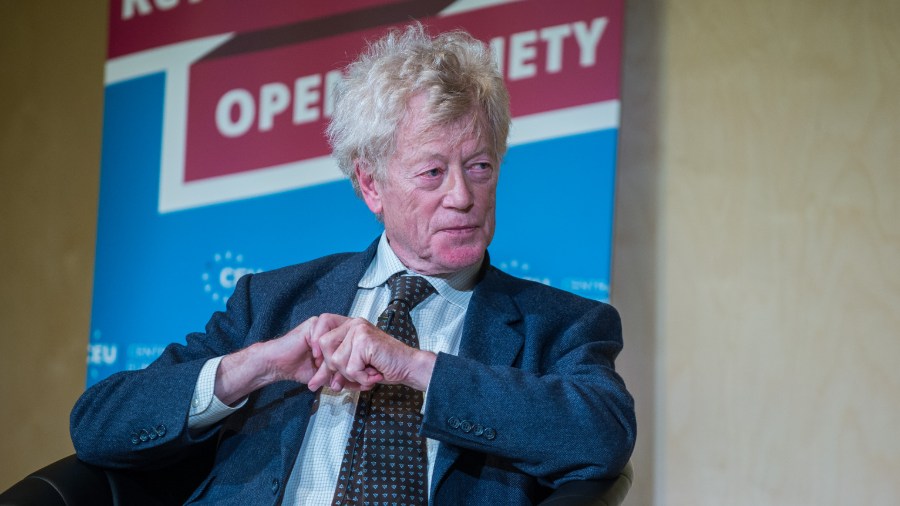 In this Nov. 16, 2017, file photo, writer and philosopher Sir Roger Scruton gives a lecture, titled "Liberalism and Loyalty," as part of the Rethinking Open Society series at Central European University in Budapest, Hungary.

While reading some living authors, I desire to talk with them — perhaps to clarify the author’s thought, to address something not mentioned in their books, or to challenge a conclusion. Roger Scruton, who died at age 75 on January 12, was such an author to me. (Raymond Tallis, an atheist, is another.) His clear and sometimes soaring prose, his command of the history of ideas and culture, his willingness to defy fashion for the sake of his convictions, his erudite defense of conservativism — these qualities and many more drew me to his thinking. Since his death, I have decided to read all of his books. (My Amazon bill confirms it.) I have a good start on that, and have used several of his works at textbooks at Denver Seminary.

I wrote Dr. Scruton two emails, both of which were answered by his secretary. The first email told of my sending my book Christian Apologetics to him through Amazon UK. I wanted to send a signed copy from the U.S., but it cost too much.

I sent another a few months ago, after I found that Sir Roger (he was knighted in 2016) had serious cancer. Again, his secretary responded, this time saying he was in good hands with his doctor and was in good spirits. I hoped that there had been improvement or at least that he was stable. My email encouraged him to read my chapter on the resurrection of Jesus. I heard that he had doubts about it. I wrote, “Please read this in light of eternity.” I did not want to be preachy, but I did want to be urgent. As Blaise Pascal wrote, “Between heaven and hell is only this life, which is the most fragile thing in the world.” We must not be ashamed of the gospel. (Romans 1:16-17)

Conserving What Was Good

Roger Scruton shared so many beliefs with Christians — the objectivity of truth, the limits of politics to bring about the good life, the reality of beauty, the dignity of human beings, and the falsehood of scientism. I relished intolerance of cant (and his appreciation of Kant). He played the organ in his local Anglican Church on Sundays and wrote a book on the church of England called Our Church. He wrote fifty books and countless articles, on politics, architecture, opera, popular culture, music, wine, hunting and more. He wrote six novels. Reading Sir Roger is ennobling.

Sir Roger taught philosophy full-time for twenty years before becoming a kind of free-lance intellectual (and of the highest order). He became a conservative while watching the student riots in Paris in 1968. He wrote: “I suddenly realised I was on the other side … wanted to conserve things, rather than pull them down.” Fittingly, he read Edmund Burke, who “summarised … all my hesitations about progress.” (Burke is the quintessential conservative, who wrote Reflections on the Revolution in France.) He then resolved to conserve what was good, instead of razing it all in the name of an impossible utopia.

A Bold Commitment Sharing to Truth

Not only did he teach and write to that end. He lived it out as a what I call an insurgent intellectual. Not a few sociologists in America are Marxist or neo-Marxist. Scruton, on the contrary, took the conservative and anti-Marxist message to the heart of the beast. As The Guardian reported in its obituary:

In 1978, Scruton co-founded the Jan Hus Educational Foundation in Prague. Under the codename Wiewórka, Polish for squirrel (“a tribute to my red hair”), he gave clandestine lectures, assisted dissident activism, and smuggled banned works (disguised as unused computer discs) into the Soviet bloc. As a result, he was arrested and thrown out of Czechoslovakia several times in the 1980s – and, after the collapse of communism, was awarded medals by the Czech Republic, Poland and Hungary.

(Jan Hus, by the way, was a Christian reformer. He is a hero in Czech Republic, which is, ironically and sadly, one of the most secular nations on earth.)

I dare say Christians should emulate Sir Roger’s deep learning and his willingness to daringly take the living truth where it is suppressed, repressed, distorted or forgotten. Life is too short and eternity is too long to play it safe or be boring. As Paul wrote to the Romans, “It has always been my ambition to preach the gospel where Christ was not known, so that I would not be building on someone else’s foundation.” (Romans 15:20)

Our best tribute to Sir Roger Scruton is to read his books and to heed his words. So, let me recommend a few.

Oh, there are so many more, but I draw this to a close with a prayer.

Our Father in Heaven, the Giver of every good and perfect gift,

I thank you for the courage and insights of Roger Scruton and for all thinkers who have helped orient us intellectually before the perennial questions of life and death, goodness and evil, beauty and ugliness. We know that by the wisdom of this world, we cannot know Christ for who He is, as your Apostle Paul wrote. Yet, still, your truth is not constrained to come only through those with a clear declaration of their allegiance to you. Paul found truth in Greek philosophy, and he used that as a bridge to preach the Gospel.

I hope and I have prayed that Roger Scruton will be found in that number as the saints go marching in to your eternal Kingdom.

Quick Shot: Is Sincerity All God Expects of Us?

How Do We Speak Truth in a Distracted Age?