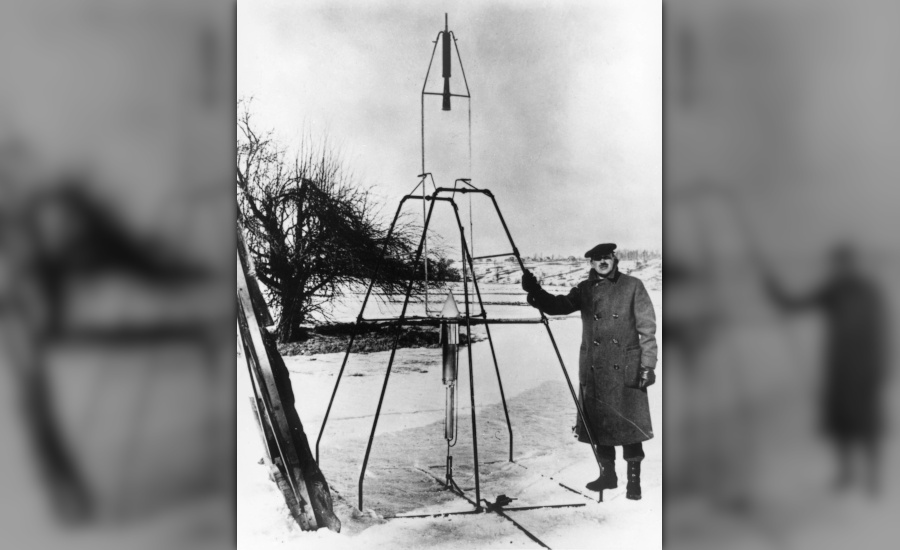 50 years ago today, as Apollo 11 rocketed toward the moon, The New York Times admitted they’d had blown it. Nearly 50 years earlier, the Times ridiculed the notion of rockets travelling to the moon. More specifically, they mocked physicist and rocket pioneer Robert H. Goddard who said such a trip was possible.

Goddard had published an article titled “A Method of Reaching Extreme Altitudes,” explaining the feasibility of space travel. Almost as an aside, he discussed how a rocket could reach the moon, and set off an explosive that could be seen from earth. On January 13, 1920 The Times launched an attack.

That professor Goddard, with his ‘chair’ in Clark College and the countenancing of the Smithsonian Institution [from which Goddard held a grant to research rocket flight], does not know the relation of action to reaction, and of the need to have something better than a vacuum against which to react — to say that would be absurd. Of course he only seems to lack the knowledge ladled out daily in high schools.

In other words, a rocket would need something to push off against, like the earth or the atmosphere. In the vacuum of space, there’d be nothing for the rocket to push off against. Makes sense, right? However, Goddard believed this was not an issue, thanks to Sir Isaac Newton’s Third Law of Motion,  which states “for every action there is an equal and opposite reaction.” So whatever thrust was coming out of the bottom of the rocket and equal force would be pushing the top of the rocket.

According to NASA, “The resulting ridicule created in Goddard firm convictions about the nature of the press corps, which he held for the rest of his life.” It wasn’t just the fake news media. Even other scientists ridiculed him for believing extreme altitude flight was possible.

But Robert Goddard did not give up his dream. Or should I say vision.

A Vision of Mars

Goddard’s dedication to pursuing space flight became fixed when he was 17. The date was October 19, 1899. The teenager happened to climb a cherry tree to cut off dead limbs. What happened next forever set his eyes on the heavens.

On this day I climbed a tall cherry tree at the back of the barn … and as I looked toward the fields at the east, I imagined how wonderful it would be to make some device which had even the possibility of ascending to Mars, and how it would look on a small scale, if sent up from the meadow at my feet. I have several photographs of the tree, taken since, with the little ladder I made to climb it, leaning against it.

It seemed to me then that a weight whirling around a horizontal shaft, moving more rapidly above than below, could furnish lift by virtue of the greater centrifugal force at the top of the path.

Goddard felt as if the tree was lifting off the ground, propelling him into the sky above Massachusetts.

I was a different boy when I descended the tree from when I ascended. Existence at last seemed very purposive.

For the rest of his life, Goddard observed October 19 as “Anniversary Day”, a private commemoration of the day of his greatest inspiration.

In 1914, Goddard invented the multi-stage rocket and a liquid fuel rocket. Both of which would become milestones in space flight. He’d go on to earn 214 patents. Then on March 16, 1926 on his Aunt Effie’s farm, Goddard launched the world’s first liquid-fueled rocket. Man was on his way to the moon, even if he didn’t know it yet.

Goddard launched 34 rockets in all, achieving altitudes as high as 1.6 miles and speeds up to 550 mph. His work was foundational to not only space travel, but atmospheric research and military applications, such as bazookas and ballistic missiles.)

Unlike the Wright Brothers, Goddard’s breakthroughs were not lauded at the time. Nor did Goddard have any fame in his lifetime. He died in 1945.

However, the dawn of the space age brought growing recognition of his work. By the time of the first manned flights, Goddard was a giant. In fact on the 35th anniversary of that first liquid-fueled rocket launch, NASA formally dedicated the Goddard Space Flight Center just outside the Nation’s Capital.

Goddard was the first scientist who not only realized the potentialities of missiles and space flight but also contributed directly in bringing them to practical realization. Goddard had a rare talent in both creative science and practical engineering. The dedicated labors of this modest man went largely unrecognized in the United States until the dawn of the Space Age. High honors and wide acclaim, belated but richly deserved, now come to the name of Robert H. Goddard.

Eight years later, man was heading to the moon.

On July 16, 1969 Apollo 11 lifted off from earth, with its next stop the moon. The following morning, The New York Times offered a (typically) muted response to its colossal mistake and mockery of Robert Goddard.

“Further investigation and experimentation have confirmed the findings of Isaac Newton in the 17th century, and it is now definitely established that a rocket can function in a vacuum as well as in an atmosphere,” the Times editors wrote. They added, “The Times regrets the error.”