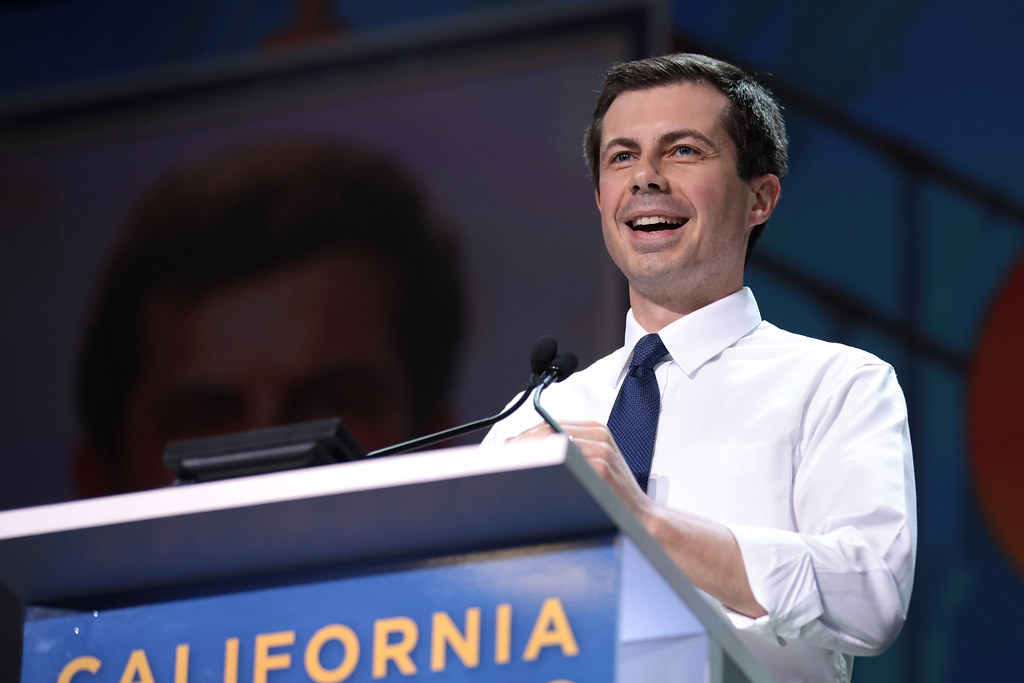 CNN’s April Ryan asked Transportation Secretary Pete Buttigieg Monday to “deconstruct the racism” built onto our roadways. (Pete Buttigieg? He’s back at work? Who noticed?) Apparently, Ryan is upset that white road lines are over top of black roads.

Buttigieg, whose highest qualification to be Transportation Secretary is having gotten engaged in a train station, took the “racist roads” question and ran with it.

It’s actually something he’s talked about before, saying in April, “there is racism physically built into some of our highways.” But on Monday he got specific:

I’m still surprised that some people were surprised when I pointed to the fact that if a highway was built for the purpose of dividing a White and a Black neighborhood or if an underpass was constructed such that a bus carrying mostly Black and Puerto Rican kids to a beach, or that would have been, in New York was designed too low for it to pass by, that that obviously reflects racism that went into those design choices.”

Somebody built low overpasses to stop Blacks and Puerto Rican kids from going to the beach? What kind of nonsense is this? Whites in the city wouldn’t take the bus to the beach? Where in the world did Buttigieg get this from?  Unlike Joe Biden, who simply crafts fantasies out of thin air, Buttigieg’s tale is based on a germ of truth. He’s referencing allegations made against New York’s legendary early-to-mid 20th Century city planner and “master builder” Robert Moses.

And it’s a fascinating story.

It started with a 1974 Pulitizer Prize-winning biography of Moses called The Power Broker. That book claimed that Moses ordered city engineers to make the overpasses on the Southern State Parkway lower to keep buses from the city from getting to Jones Beach. As Bloomberg CityLab put it “buses presumably filled with the poor blacks and Puerto Ricans Moses despised.” Author Robert A. Caro got the story from a close Moses associate, former chief engineer and General Manager of the Long Island State Park Commission, Sidney M. Shapiro.

In 2017, writing in Bloomberg CityLab, Thomas J. Campanella dug deeper into the allegation. And immediately ran into a problem. Primarily, that the whole point Moses had for building the Southern State Parkway was to get people — black, brown, white, yellow —from the city out to the beach. And that included people on buses.

Contrary to a claim in The Power Broker, Moses clearly meant buses to serve his “little Jones Beach” in the Rockaways —Jacob Riis Park. While oriented mainly toward motorists (the parking lot was once the largest in the world), it is simply not true that New Yorkers without cars were excluded. The original site plan included bus drop-off zones, and photographs from the era plainly show buses loading and unloading passengers. “Bus connections with the B.M.T. and I.R.T. in Brooklyn,” reported the Brooklyn Eagle when the vast seaside playground opened 80 years ago this summer, “make the park easily accessible to non-motorists.”

Those early parkways of the 20’s and 30’s really emphasized aesthetics, “more park than way,” and bridges over parkways tended to be lower for the better look. (Another example of this? Think of the curves on the Pasadena Freeway out of Los Angeles. Lovely to look at. Dangerous for drivers.)

So Moses wanted buses going from the ‘hood to the beach. All parkway overpasses of the age would be lower than we might build them today. Buttigieg’s definitive claim of racism in building these roads seems to fall on its face. Especially in lieu of more recent reassessments of Moses’s massive contribution to the city’s parks, playgrounds, housing and infrastructure benefiting all races. And then there’s this narrative-crushing tidbit from the Manhattan Institute:

Remember, for most of the 20th century, the city was overwhelmingly white. Jones Beach State Park was built in the 1920s, when African-Americans were only 3% of the city’s population. As late as 1945, there were only 13,000 Puerto Ricans in New York City.

But There is a Twist

However, in fairness to Buttigieg, there is a twist to the story. Campanella actually went out and measured the overpasses on the Southern State Parkway, and compared them to similar arched stone or brick-clad overpasses on other parkways from the era. His conclusion? “Overall, clearances are substantially lower on the Moses parkway, averaging just 107.6 inches (eastbound).” The others averaged between 115 and 123 inches.

Also, Southern State Parkway has four overpasses that are only 96 inches. All three Westchester parkways combined have only one such overpass.

Was this deliberately done to suppress people of color? Block buses with Blacks and Puerto Ricans… who were only a fraction of the population at the time? Impossible to say … though easy enough for Buttigieg to fling from the cheap seats in 2021 for cheap political points.

Those overpasses are around 100 years old. And those overpasses have no way of knowing what color anybody is who’s passing under. Moses is four decades dead. As is the truth about whether he deliberately wanted those overpasses low to hurt people of color, though common sense makes it unlikely. More to the point, this nation has walked too many roads, crossed over many bridges together in the generations since.

Buttigieg spoke of roads being used to divide whites and blacks.

That is precisely what his rhetoric is doing now.