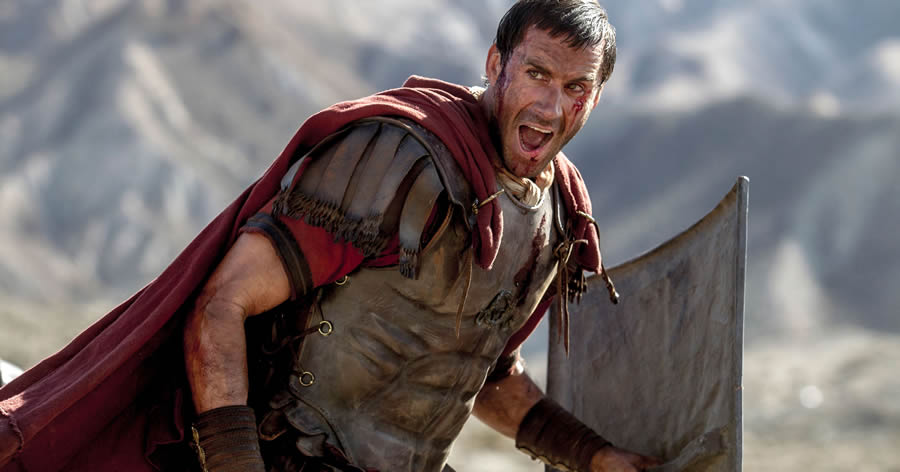 Risen is a powerful new film about the resurrection of Christ and the first days of the Church. It has suspense, intrigue, tense chase sequences and even some cool combat scenes. The film is accurate, exciting, and truthful, without being preachy or melodramatic. I almost called it “reverent,” but that word isn’t right: It suggests a cautious, tentative slowness more fitting for liturgy than cinema. But Risen moves!

Its strongly-acted characters and well-plotted action will keep you riveted from the opening credits on. I saw it in a theater that serves up margaritas, but didn’t see anyone dash for a bathroom break — they didn’t want to miss a single minute. So go out and see it. And no, it can’t count as a sacrifice for Lent, since you’re going to enjoy it, with or without the margaritas.

Now that I’ve taken care of your Friday night, let me explain what else is special about the movie. It views the story of Jesus’ death and resurrection from exactly the right perspective — that of a Roman tribune and half-hearted pagan, Clavius (Joseph Fiennes).

Seeing Risen forced me to admit something that has troubled me with every movie like this: In each of them that I’ve seen, from Jesus of Nazareth and The Gospel of John to The Passion of the Christ, I found myself identifying not with Jews but with the Romans.

These are the reasonable people, the bringers of order and law, the builders of road and aqueducts. They are clean-shaven and hygienic, with normal haircuts, and sane, worldly priorities: They want a quiet country, where people pay their taxes and follow the laws.

But the people they’re governing loom alien in our eyes: a horde of long-haired, bearded, often barefoot Middle Easterners prone to squabbling over prophecies — when they’re not leaping out of caverns as wild-eyed, quasi-suicidal Zealots. When the Roman soldiers in Risen fan out through Jerusalem, searching houses for what they think are religiously-motivated terrorists, I couldn’t help thinking of similar scenes in American Sniper. Which is troubling, I know.

I used to justify this reaction to myself by remembering that the Empire would be someday converted, and serve as the bulwark of a Church that evangelized the West. In favoring the Romans, I was siding with a kind of proto-Church, that only awaited a Constantine to bring it to final perfection. But you don’t need to be a Protestant to see that this theory won’t wash.

As a lifelong Christian, I would feel better about myself for taking the viewpoint of the apostles, or Jesus’ mother — or at least of the long-suffering Jews in the crowd who looked to Christ for their secular deliverance. But I just can’t. And neither, I’m guessing, can you.

For most movies, that’s a problem, since the filmmakers try to help us see Jesus through the eyes of His followers. But we aren’t anything like them. We’re not members of a small, divinely elected tribe whose race and religion are identical, who have suffered under foreign occupation for hundreds of years, and now crave a conquering hero. (Though if you watched some of Donald Trump’s most enthusiastic supporters, you might think otherwise.)

We are much more like first-century Romans, citizens of a sprawling world power that has drifted from the virtues that made it great, where religion increasingly serves a purely decorative function — and we like to keep it that way. Like Romans, we savor the benefits of an elaborate humane culture that celebrates the power of the mind. Like Romans, we cast off our unwanted infants. It is sad, but it’s the only “reasonable” thing to do. Life is fabulous, life is cheap.

Risen takes this fundamental narrative problem and turns it into a virtue. We see Clavius colluding with Pontius Pilate about the internal machinations of Roman government, and it sounds like our talk of primary elections, or the intrigues of office politics. We hear them confer about to how to placate a religious mob, and it reminds us of news reports from Iraq. More piquantly, we eavesdrop as these Romans talk of things divine, and cite their favorite gods with the same empty look in their eyes as any modern who claims to be “spiritual, not religious.”

We have all suffered from doubts, and we live in a culture that is predicated on them. So we can stand in Pilate’s sandals as he wearily sums up the payoff for a lifetime of careful ambition. He points at a corpse. “We do all of it … for this.” The great and final zero that multiplies our every earthly effort hangs heavy over these Romans, who deal with death via denial, or purge their fear in bloody, exciting spectacles.

As Clavius admits to Pilate, all he really seeks in life is “a day without death.” He doesn’t just mean that he’s fleeing the face of combat, or the grim job of conducting crucifixions. He wants one day of life that death doesn’t haunt, taint, and poison. And he tells us with his sad little smile that he knows he’ll never find it. Unless …

What of this laughable story that the Jews’ messiah had actually… risen, in just the way he had promised? At that our pagan hearts are simultaneously skeptical and wistful. Could such tales be more than tales, but sober, tangible fact? What if we could meet that Messiah in the flesh, join him for a meal, and watch him talking and laughing with his followers, his friends? What would that feel like? What would it look like? How would it change us?

We find the answers in Risen, through the same halting steps that Clavius must follow. His skepticism is our skepticism, his vague hopes and doubts our own — no matter how faithful we are as churchgoers. The air we breathe, the lives we live are Roman, through and through. It’s for us to find that ancient Jewish spark that can set them afire. Risen reminds us where to seek, and assures us that we shall find.

This review originally ran for Easter 2016, when the film was released.

Rambo: Last Blood — a Movie for Dads and Sons?

We Know Jesus Rose Because We Know How He Was Buried