Ripple Effects: The Power of a Woman’s Influence

Pam Tebow — Tim Tebow's mom — talks about the importance and power of the influence women have on others in their lives. 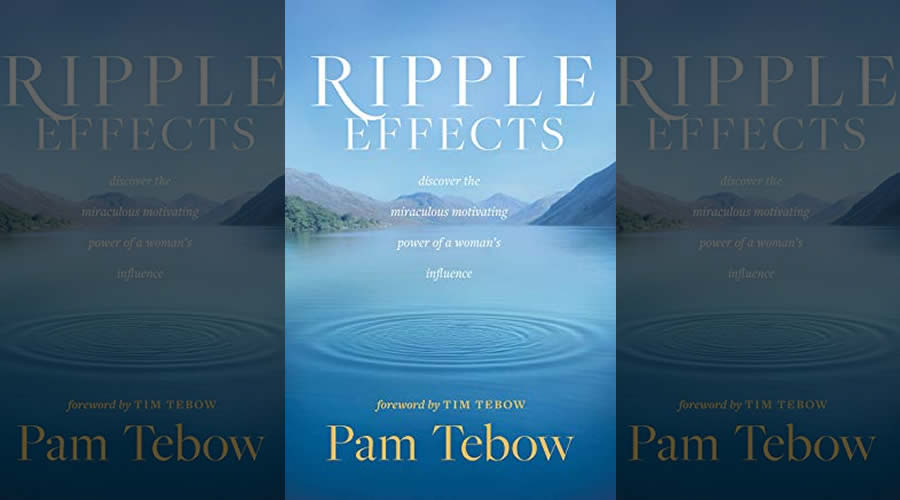 Pam Tebow, mother of former NFL quarterback and current New York Mets minor league player Tim Tebow, stopped by LIFE Today studios this week to talk about her new book, Ripple Effects: Discover the Miraculous Motivating Power of a Woman’s Influence. The Stream’s Nancy Flory grabbed a few minutes with Pam to talk about her book and women’s influence on the world around them.

Tell me how this book came about?

Well, I prayed before I was speaking on influence in Houston. It’s my life message. I’ve been speaking on it for years and living it out. So I said, ‘Lord, if you want [a book deal] to happen, You’re going to have to orchestrate it, because I’m not doing this, I’m not going to seek it. I want You to orchestrate it.’

The people in Houston were amazing. They said, ‘We would like to film this for just you and we want to give it to you.’ So they gave it to me.

Then an agent got a hold of it. God just orchestrated that. They said, ‘This is a book we want to do,’ and they asked for a proposal.

Then I wrote the proposal and they shopped it and it all happened so quickly. So when God is ready to do something it doesn’t take time. I never wanted to do it myself — [to] try to manipulate and plan and scheme and become a writer. I just wanted God to do it in a way that only He could do so that I would know it’s His plan.

Was writing for women the idea all along, that it was an audience of women?

It is. Now I encouraged my boys that they could be a life of influence. I have a lot of examples of that. But my main message is to women, that God created them with an opportunity, and really it’s an unparalleled opportunity for women to be influential. We have the potential to influence this generation and the generations to come whether you’re a mom or not, still, that’s the heart, I really believe.

There’s a longing inside each of us to really make an impact on our world, at least [in] our sphere of influence. It can be small or it can be large. It doesn’t have to be huge. We’re not talking about a world stage. It might just be people in our neighborhood or classroom or office.

When did you start seeing and recognizing the influence you were having?

I think I started calling it that when, it was early on and I had an opportunity to impact Timmy and I talk about that in the beginning of the book.

But actually, it was really in college that I first became aware of potential for influence because I went to my first Bible study. I only knew one verse. It was my sophomore year and I learned a little bit at that Bible study. Then I came back to where I lived in college and taught the girls that lived around me the little bit I learned.

You know, that was just a little bit of influence, but what a difference it made in the lives of the girls around me. After a while, they all started their own Bible studies. Talk about ripple effects. It just grew. So, I started thinking about it way back then, but then I really began to develop it some years later into a message.

God brought me to the point where I felt like I was self-centered and just thought about myself. Then when I realized that God could turn that around and allow me to make a real difference in someone’s life that mattered. Then I kind of got hooked on that. It definitely took a while to begin to grow and grow and grow more.

I think that was my favorite opportunity for influence. You’ve got these little people and you’re responsible for them. It was [important] for me to get my life in order. I don’t know that you can ever get your life in order but I realized that they would mimic me. So, if I’m not being kind, they’re not going to be kind to each other, et cetera.

I think one of the most exciting times for me was when my daughter, who watched us live on the mission field go through all of our crazy adventures and trusting the Lord and trials, [felt called to the mission field]. She said, “Mom, Joey and I can hardly wait to trust the Lord for our mission field adventures just like you and Daddy did.”

You realize that they’re always watching you. They’re watching how you act in situations, how you deal with challenges and trials, and we had lots of them on the mission field. But rather than keeping her from wanting to be a missionary, she saw God’s hand in all of it. How we trusted Him and how we got through and she wanted in on that. She and her husband wanted to see God work on their behalf too on the mission field.

What’s the influence of prayer?

Prayer was something I knew nothing about growing up. I hardly knew how to pray. I just learned slowly. I began to realize it’s a relationship. It still is. I mean, I remember teaching Timmy. I told him prayer is just a running conversation with God. He talked to a group of boys. I heard him say, ‘Prayer is just a running conversation with God.’ Of course, he took it to a new level. He said, ‘You know, you can pray when you’re in the huddle, when you’re throwing the football, when you’re on the sidelines.’

And that’s true for us too, as women, that we can pray all the time. And I really treasure that privilege because I need to pray all the time. I just shoot up a prayer to talk to the Lord — It’s our relationship. It keeps us connected. Some of my prayers have been desperate prayers where, if God doesn’t come through, you don’t make it. Others have just been trivial things like, ‘Lord I really need to know what I should wear for this, just put it in my head.’ He cares about those details.

Can you talk a little bit about the ripple effects you’ve seen in your grandkids?

Oh my goodness. I love it. [Years ago] we had a robber break in in our first night alone in the Philippines when my husband left us in a missionary compound. We thought we were safe. He went to another island to find a home. The first night we were there, a robber broke in. Through the veil of darkness I watched him as he looked at my four sleeping kids and looked at me, grabbed my purse, took a few pesos out and threw it back. We were frightened. We needed to deal with fears. I wanted my kids to be courageous. So, I went to the Scripture — the manual I call it — and found some verses on fear. I taught [my kids] and I sang it every night before they went to bed.

Then [recently] I went to a birthday party. My two daughters and our five grandchildren were gathered after a fun day of parties, cake and kids and presents. The girls asked me to put them to bed. The kids said, ‘Grandma, sing us a song.’ So I started to sing that song to [my grandkids] and all five of them sang along. I just cried happy tears because that was really a ripple effect. I love that Scripture, taught it to their moms and their moms taught it to their kids. That verse helped them deal with fears. Scripture is powerful! They’re one of my favorite opportunities for influence.

Nancy Flory is an Associate Editor at The Stream. You can follow her on Twitter @NancyFlory3. If you’re not already following The Stream on social media, find us on Twitter @Streamdotorg and Facebook at TheStream.Org.