Revolutionary War Silhouettes Cause Freakout Over Portrayal of Guns 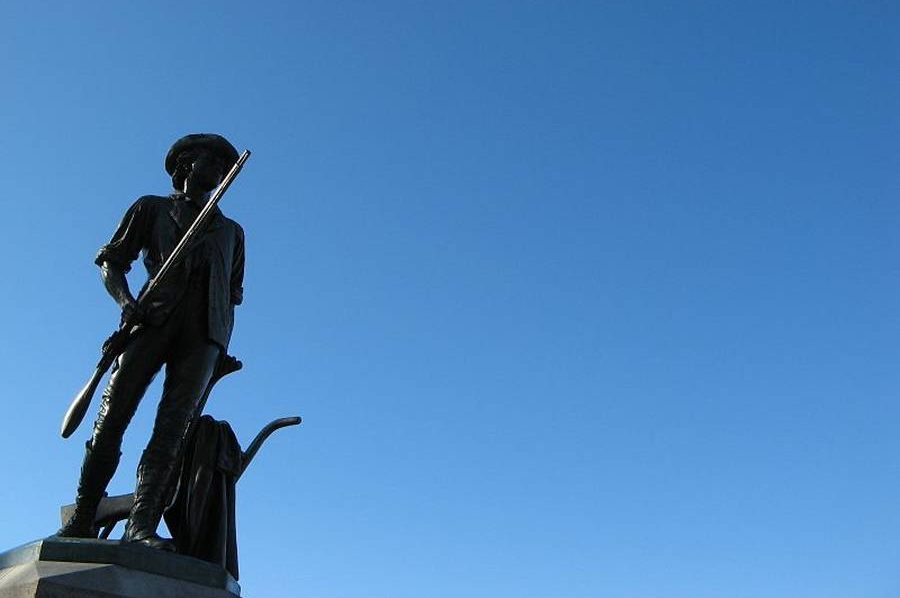 The Minuteman statue at Minuteman National Historic Park. This is the spot where the Minutemen faced down British troops across the Old North Bridge.

The English poet Steve Turner once observed, “History repeats itself. It has to. No one is listening.” I think this applies very well to American history.

The average American today is grossly ignorant of our history and we fall prey too often to those cutting us off from that history — for whatever reason. Here is a case in point.

Gun Violence and the Minutemen

In an obscure display in the state of Washington, liberals are melting down over the presence of flat steel depictions of guns — guns held by silhouettes of Revolutionary War Minutemen.

This display is in Port Angeles, and the centerpiece is a replica of the Liberty Bell. The display is guarded by a fence that has a design which depicts two Revolutionary-era soldiers holding their rifles.

This new display has drawn the ire of the mayor, Sissi Bruch, who objected to a local newspaper, “I’ve had comments from people saying do we have to do guys with guns when guns are killing our children in schools?”

Cherie Kidd, who serves on the city council, does not agree with the mayor’s request to remove the design. Kidd noted, “We are a free nation only because of the brave men and women who have fought for our freedom.”

How Were Our Freedoms Won?

I maintain our history is important to understand because America is a unique phenomenon. To this day, people risk their lives to try and emigrate here. Not because of liberalism, but despite it.

I am writing these words on Veterans Day, a time to remember those who have served this country that we might enjoy our freedoms.

With all due respect, Mayor Bruch is able to serve as mayor because of the hard-won freedom by those who have served in the military.

In the Veterans Day entry in our devotional book Beside Still Waters, Dr. D. James Kennedy and I wrote: “War is a great evil. It is a tragedy. Every Christian should abhor it and do what he can to prevent it. We are to live at peace with all men as much as lies within us. But there are times when we must fight. So the greatest of Christian theologians and Reformers down through the centuries have believed, and so too believed the Founders of this nation.”

Men of the Church Were Trained to Defend Their Homes

Who exactly were the Minutemen, whose artistic depiction is now causing offense to the politically correct crowd? Minutemen were often deacons of churches, whose pastors would have them march in preparation for potential conflict.

The Minutemen were so labeled because they could be called upon in a minute’s notice to defend their homes.

Oklahoma pastor Dan Fisher is the author of Bringing Back the Black Robed Regiment, which deals with Independence-era preachers, who often mobilized the men in their churches to defend their homeland.

We get a taste of this historical reality in the fictional character of a minister that Mel Gibson created in his movie, The Patriot. There were many such patriot preachers in the American Revolution. Because they preached with a black robe, they were derisively called “the black-robed regiment.” The name stuck.

Minutemen were often deacons of churches, whose pastors would have them march in preparation for potential conflict.

One such patriot pastor was Rev. Jonas Clark, who had trained the men in his church in Lexington to be ready for such an incident.

In the wee hours of the morning of April 19, 1775, when the British regulars were marching on their way from Boston to Concord to seize arms there, they were confronted by armed American laymen in Lexington. These laymen were committed to stand their ground, but not to shoot unless shot upon.

These armed laymen were mostly men from Rev. Clark’s church. The battle that began in Lexington and later Concord that same day was the very beginning of the American Revolution.

Dan Fisher told me in an interview recently regarding Lexington, “The 77 men who gathered were from all over the area. The way that they worked this, because there were no cell phones, no Internet … they would sound an alarm. Typically, they would ring a bell in the church or the meeting house. And so, all of these men in their training (thus, the title Minuteman) were taught that when you hear the alarm, whatever the agreed upon alarm was, in a minute you’re supposed to report for duty.”

It was because of the sacrifice of men like this that we have our liberty. That includes those who paid what Lincoln called “the last full measure of devotion.”

Mayors like the one in this Washington city seem to be busily cutting us off from our historical roots, and what a rich history it is.

The First Meal on the Moon