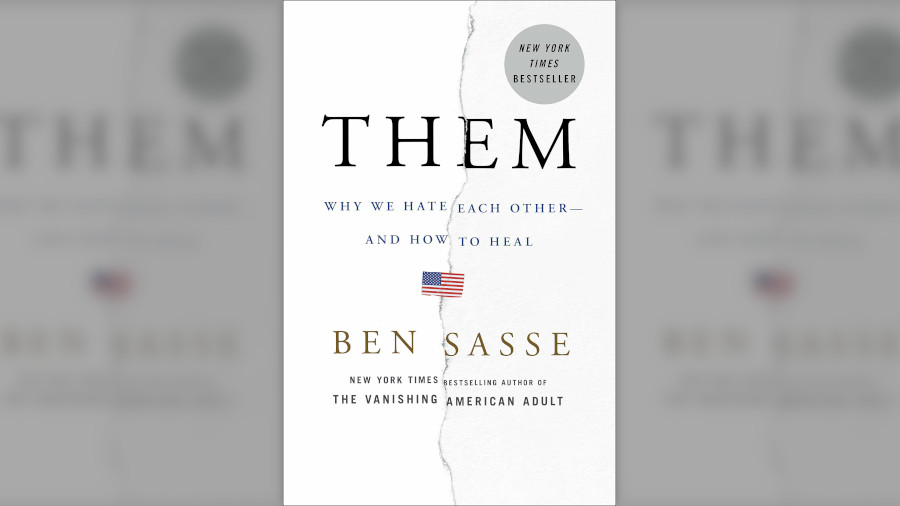 Ben Sasse’s new book Them: Why We Hate Each Other — and How to Heal makes the case that our polarized culture is the result of increased loneliness and a misdirected search for pseudo-community in anti-tribes. This grim diagnosis from a Republican senator is followed by a four-part prescription.

Americans have fewer friendships than in the past. One in five says that loneliness is a “major source of unhappiness.” One in three adults over 45 says that “chronic loneliness” is a fundamental challenge in their lives. Why? Sasse argues that the breakdown of natural, local associations — families, churches, Rotary clubs, Little Leagues — is a key contributor. We’ve lost what Sasse calls “the hometown gym on a Friday night” feeling. We used to have a sense of doing life together with the fellow members of our community. Now it feels more like it’s every family — or every person — on their own.

To fill the gap, we turn to an endless array of shallow connections on social media. Or to TV news programming that creates a “family home, fireside chat” ambiance. Sasse believes that loneliness leads people to form “anti-tribes” — groups known mainly by what they’re against, not what they’re for. Lacking face-to-face relationships, especially with those who differ from us, it becomes easy for Democrats and Republicans to spew vitriol at each other on Twitter or Facebook. We assume that those who disagree with us are not just wrong but evil. We form quasi-familial bonds with those who share our fears and frustrations with “them.”

Lacking face-to-face relationships, especially with those who differ from us, it becomes easy for Democrats and Republicans to spew vitriol at each other on Twitter or Facebook.

We turn to the news not to learn and be challenged but to be entertained and to have our biases confirmed. Sasse unloads on both liberal and conservative pundits who find a market in stoking people’s rage for clicks and cash. The Senator coins the term “nutpicking”—the practice of finding a “nut” and then making that “nut” the representative for the entire opposing camp. All Trump supporters are white supremacists. All Democrats are brainless socialists. Both sides are guilty of straw man arguments because emoting and venting garners higher ratings than nuance and analysis.

Sasse builds on the work of Robert Putnam, the sociologist whose books include Bowling Alone and more recently Our Kids. The latter makes the point that “our kids” used to refer to the kids in “our” neighborhood. Today, it means “those in my household.” There’s less communal responsibility.

Worse, though, we’re becoming two Americas. In the last few decades, “the top one-third of Americans are doing very well, while the bottom two-thirds are in free-fall.” The gap between the “haves” and “have-nots” is growing. And if you’re in the latter, it’s getting harder to move up.

Why? Lack of social capital. Networks. Friends to help you navigate your way to professional and financial advancement. Think about it: If you’re in the top-third, you’re probably in a stable, two-parent home. You’re involved in the intellectual and social development of your children. Reading to them as infants, helping them with school as they get older, and volunteering with their sports and music programs. Your kids grow up with “friends of friends” who open doors to enriching opportunities culminating in college admissions and career-launching.

The bottom two-thirds? “Of births to women with a high school diploma or less, 20 percent were out of wedlock in the 1970s; today, it’s just shy of 70 percent.” Kids raised by unmarried parents (often just a mom) are less likely to have parents read to them as infants or help them get into advanced classes in middle and high school. Huge disadvantages accrue in an era where education or post-high school job training is more important than ever. Worse: lower income households once regularly rubbed shoulders with families that were better off. They shared overlapping social circles. No longer. Fewer Americans even know people outside their socioeconomic class.

Sasse argues that the nature of work is also pulling us apart. Job permanence in one community is a thing of the past. We’re expected to constantly market ourselves, moving from job to job and town to town. We’re rootless and disconnected from our neighbors. We unconsciously conclude it’s too difficult to form strong friendships. So we stop even trying. Instead, we tune into cable news and social media, venting about those we disagree with.

What Should We Do?

Becoming Americans again means emphasizing civics over politics. It’s about recovering the concept that every individual is created with dignity and that therefore government is just a tool, not the source of our rights.

Setting tech limits is self-explanatory: If you’re on your phone, you can’t simultaneously be present with those around you. So set firm boundaries. Sadly, many families spend more time alone on their gadgets than interacting with each other. The book is worth the price for this chapter alone.

Buying a cemetery plot is about making an impact in a particular community. Even if you end up moving a few years later. Making a difference where you are, while you are there. Being a smarter nomad is similar: It’s about prioritizing people over things. About pursuing depth in a few relationships over a lifetime.

Like Sasse’s first book (reviewed here), Them: Why We Hate Each Other and How to Heal presents a potpourri of provocative ideas surrounding a central theme. At times I found myself wishing Sasse had spent more time making his case. For example, most online communities, in my experience, are not defined by what they’re against. Nor are they known for vitriol. But Senators are now being chased out of restaurants and harassed with death threats on their personal cell phones. So I can understand where Sasse is coming from. The point is: You don’t have to fully affirm every sub-argument to get a ton out of this fascinating and well-written book. Reading it will make you a better parent, neighbor, and citizen.

Becoming Rooted in a Time of Social Distancing