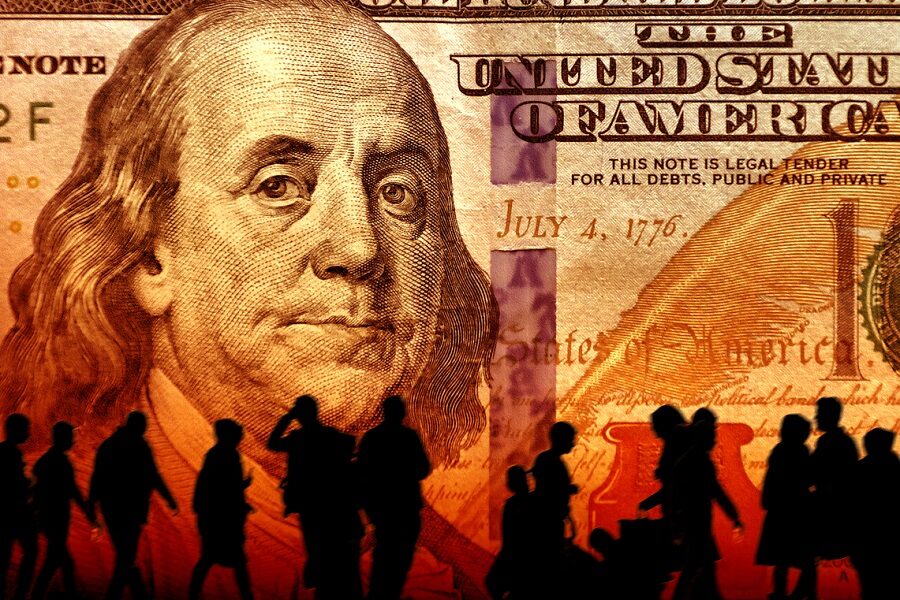 “Mehrsa Baradaran, a professor at the University of California, Irvine School of Law, is helping Biden prepare to “hit the ground running on Day One” as a member of his Department of the Treasury agency review team. Baradaran is an outspoken advocate of reparations for black Americans, both as a means of correcting “white supremacy” and closing the racial wealth gap.”

We have a new president with a much different philosophy than our previous one. Besides Biden and his beliefs, those who helped him get elected will receive payoffs through their policy prescriptions for those they deem valuable, including themselves. Government control for equal outcomes is the far left’s agenda, although some are more equal than others. Now the president and his teammates are the head social engineers on this train.

Our founders gave us a republic with a meritocracy where we’d “pursue happiness.” Joe Biden gives us a leftist professor who’ll close the “racial wealth gap” to create more equal outcomes. “Hitting the ground running” suggests quick implementation. The “Department of the Treasury agency review team” means she’ll have influence over your tax dollars and your children and grandchildren’s debt burden. “Correcting ‘White supremacy”’ reveals her mentality.

There are different ways of working together philosophically. Our founding fathers gave us freedom, which means working together through free association. Collectivism is its antithesis; government control its nemesis. The ethos at the founding of our United States, the great classical economist, Adam Smith, expressed as “natural liberty” and “free enterprise.” Classical economic ideas are why America is wealthy and affords so much opportunity.

Talk about quadrupling down on failure. We’ve tried similar ideas for many decades with numerous comparable government programs. Trump gave us the lowest black and Hispanic unemployment rates in history through his policies. Under Biden, our inner-city neighbors will likely decline by economic and moral standards affecting real peoples’ lives. She’s describing dependency, not freedom!

Traditional Americans and those who believe in classical economic theory consider dependency destructive. It’ll significantly hurt those it purports to help. Persuading generations of “activists” that dependency breaks a continuous cycle of the same is foolhardy.

Radicals make other excuses for reparations.

Do you remember the Black Lives Matter organizer telling us looting and rioting are reparations? She claimed it was justice, as local politicians refused to stop the upheaval. “They can eat and have clothes!” Is that what they did with those flat screens they stole? Ate and wore them?

Politically Strategic Falsehood Set off the Violence of 2020

George Floyd’s death was a horrible spectacle, and Democratic Party leaders — and the radicals they winked and nodded at — didn’t want to let a good crisis go to waste. The rioting, arson, violence, and murder — along with peaceful protests — presented a tremendous opportunity to seize power and grow the government—what a time for “progress!” And back came arguments for reparations.

The same people who can’t stop demonizing all Trump supporters for a Capitol Building mob break-in won’t talk about their misrepresentation of George Floyd’s death or their complicity in so much mob violence and destruction across the country throughout the year. Their subtext was: the cops are racists, and you are too! Our cities have soaring murder rates following the “defund the police” movement.

Eventually, the authorities released bodycam footage of the Floyd arrest. A lot happened before that terrible scene of the cop pressing a knee on his neck. Why didn’t they provide it earlier? Why didn’t it receive widespread attention? It showed an enormous muscular man in an apparent state of drug-induced paranoia not complying with officers. He said he couldn’t breathe and didn’t want to die long before he was on the ground — while standing upright and in no apparent distress besides his mania.

The police knew who he was, a convicted violent felon out of his mind on drugs. Saying the cops had their hands full is putting it lightly. The footage shows no sign of racism from what they said or did, and one of the cops was black. If the same thing happened, but the perpetrator was white, would so much mayhem follow? No, ANTIFA and BLM used a fake racist narrative to explode the country into violence. The ends justifying the means is their ethic regarding honesty. Do you think they’d ever stop their demands if they got reparations? Would it end their persistent push for larger government, or is it only an impetus for evermore expansion and control?

No matter how painful, asking the right questions might guide us toward better answers.

Since none of us has owned or been a slave in our country, I have a better idea for reparations. Who’s done the most damage to our society in the last fifty or sixty years with their social policies? Shouldn’t they alone pay? Who repeatedly told us women didn’t need men? What does that do to a young man’s psyche? Does it help him respect women? Is it healthy for women? Whose welfare policies incentivized fatherless homes?

Have free love and abortion brought happiness or produced productive children? Should middle-aged women who are afraid of the dark because of what they did twenty or thirty years ago get some money? Activist educators told them it was only a clump of flesh! How about kids who grew up without dads or who know they’d have brothers and sisters and many more classmates but for their parent’s “choice?”

Aren’t these acts of ultimate coarseness in the name of sensitivity? Aren’t kids sensitive to these issues? Did you know they are aware that a big part of their generation is absent and they talk about it?

Take a close look at the offenders’ skin color. Yes, some are black, but most are white. A whole lot look like spoiled privileged kids too!

Too many kids have turned to gangs, drugs, and violence. Should we let violent adults that these policies damaged out of prison and give them loads of cash? Has secularism, or Godlessness, worked? Has moral confusion led to a constant refrain from too many children to want hormones and surgery to change their sex at ever younger ages? Whose ideas fed so much moral confusion? Can we attach their bank accounts?

Is slavery from a hundred and sixty years ago or something else causing the violence in our streets? Yes, it’s still going on in Portland and Seattle, but now that Biden is in, the news media reporting on it is out! Take a close look at the offenders’ skin color. Yes, some are black, but most are white. A whole lot look like spoiled privileged kids too! Our people suffer terribly from this, especially small business owners, their employees, and those locked in their homes in fear in the most affected neighborhoods, but how do we affect change?

With a broader perspective, we can address success and patriotism.

Hopelessness Does Not Improve Society

We have many spouses and children who lost loved ones serving our country, including the survivors of murdered police officers. Consider the war to free the slaves — the amputees in the Civil war aftermath, and all the widows and orphans. We have many proud and heroic Americans from our past and present. We almost only hear bad stories about our war in Southeast Asia, but many Vietnam Vets came home and did incredibly well. I bet the prosperous ones have one thing in common. They got on with life. Even after all they went through, including being spit on when they came home, the successful ones were aspirational.

To claim any American alive today is culpable for slavery is spurious. If you calculated the amount of US wealth or income derived from slavery today, it’d be so small you couldn’t find it. Some argue that wealth gained in slavery became multiplied, but how many plantation families now live off the wealth of those times? Can you find any? Look at the wealthiest Americans. The Waltons, Buffets, Gates, and the tech billionaires gained their wealth, not in any proximity to American slavery.

The left says we still benefit from white privilege, so pay up! They strategically drive wedges between people. It works with their fixed resources Marxian thinking. As if when one person does well, they steal from another. It’s an attempt to create ethnic, gender, and class conflict.

Who benefits from racism or discrimination? No one! It means less productive people! A social breakdown from hopelessness doesn’t improve society. We should support others’ positive efforts in business competition. It’s how we provide each other superior goods and services. We should never deride “victims,” exacerbate poverty and create self-fulfilling prophecies.

Lottery winners often have nothing left in a few years. When someone doesn’t earn their fortune, history shows us they don’t know how to keep it. If a person in the inner city were to receive $100,000, how long until it’d be gone? Consequently, they’d only demand more because racism was the cause. The “organizers” will argue it’s best to control the money. Any reparations proposals will include administering it through non-profit bureaucracies that enrich the administrators and expand government agencies. In other words, “reparations” becomes a power grab and jobs program for degrees in Critical Race Theory and Gender Microaggressions.

The Answer is Fiscal Responsibility

It would be shameful to deny the history and struggle of black people in America, but shouldn’t we listen to Dr. Ben Carson and not AOC? She didn’t grow up in the hood but in Westchester County. Her father was reportedly an architect. Shouldn’t she be proud of that? I guess not. It doesn’t fit the narrative. On the other hand, Dr. Carson knows what it means to grow up raised by a single mother in inner-city Detroit. And he knows what it takes to succeed.

If we want to change for the better, the last thing we should do is demonize others, complain, demand payment for past wrongs we didn’t suffer, or even get dragged down by actual racism no matter who we are. The last thing societies, like individuals, need is to wallow and try to redistribute wealth forcibly.

When we require solutions to our government spending madness, the answer is fiscal responsibility. First, we must understand how production drives the economy; spending doesn’t—it’s the result of the perceived value we create and exchange. If we care about our children and their children, we shouldn’t blow out the budget more. People, societies, and economies prosper from productivity. Forcible redistribution is morally debilitating. We’ve suffered enough from bad ideas.

James Malloy is the author of Economic Clarity or Political Confusion. Go to econclarity.com for a sample read.