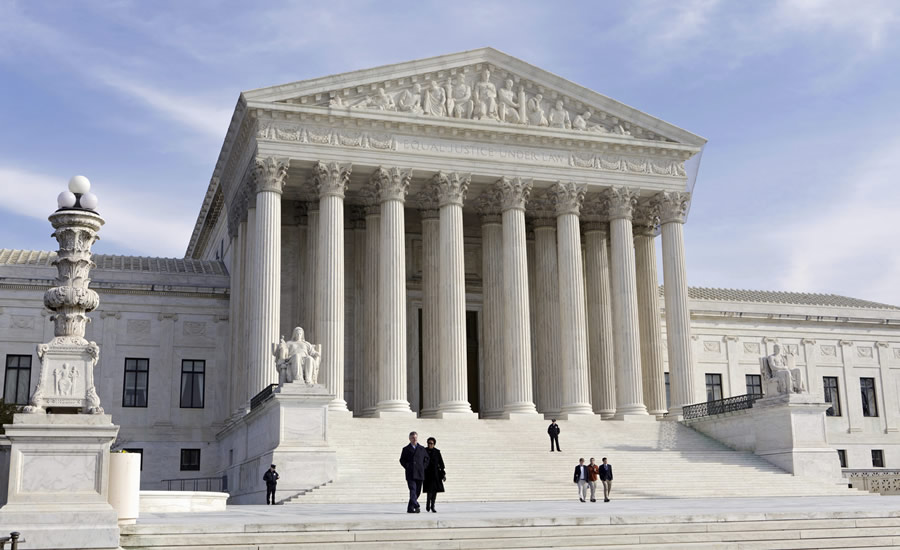 This Jan. 25, 2012, file photo, shows the U.S. Supreme Court Building in Washington. The Supreme Court is in its final week of work before a long summer hiatus.

Missouri offered recycled tires to schools for safer playgrounds. Missouri said that Trinity Lutheran School couldn’t even have used tires. Why? Because it is run by a church.

Keeping kids safe doesn’t spread the Gospel. There is no “compelling state interest” in leaving religious school playgrounds more dangerous than public ones.

Chief Justice John Roberts knew what to think about banning an ordinary public benefit like safety equipment from a school just because it’s Christian. He called it “odious to our Constitution.”

A third piece of good news from the lower courts: Last week a 5th Circuit Court of Appeals panel lifted an injunction. It had blocked Mississippi’s “Protecting Freedom of Conscience from Government Discrimination Act.”

Mississippi’s 2016 law is the best in any state. It provides the broadest protections for gay marriage dissenters. It guards those with three specific beliefs:

The law gives religious organizations new protections. Government may not force them to provide goods and services for a gay wedding. It can’t punish them for hiring believers who agree with their teachings. They don’t have to offer married student housing to gay married couples. They can’t be banned from running foster care or adoption agencies for their marriage policies.

The 5th Circuit three-man panel of judges did not rule on the substance. Instead they ruled that the plaintiffs lacked standing to sue. Merely feeling “triggered” or stigmatized doesn’t count as a harm.

The first time a wedding photographer refuses a client, however, the law will likely be back on trial. (An aside: the law’s chances of surviving under the current Court would be stronger if it protected both gay marriage supporters and dissenters.)

If religious freedom means anything it is that the government may not exclude us based on our faith.

The plaintiffs have requested that the whole 5th circuit review the three-judge ruling. But if this ruling stands Trump will have more time to appoint another Gorsuch to the court.

An Insight Into the Supreme Court

The good news is the Trinity Lutheran victory shows us the current Court is more supportive of religious liberty than many of us feared.

Justice Elana Kagan joined the majority opinion without any reserve. Justice Breyer wrote his own concurring opinion limiting his judgement to playground resurfacing programs and not all government benefits.

This ruling, “weakens this country’s longstanding commitment to a separation of church and state beneficial to both,” she wrote, “If this separation means anything, it means that the government cannot, or at the very least need not, tax its citizens and turn that money over to houses of worship. The court today blinds itself to the outcome this history requires and leads us instead to a place where separation of church and state is a constitutional slogan, not a constitutional commitment.”