Religious Freedom, Spinning Pizzas and the News in Indiana 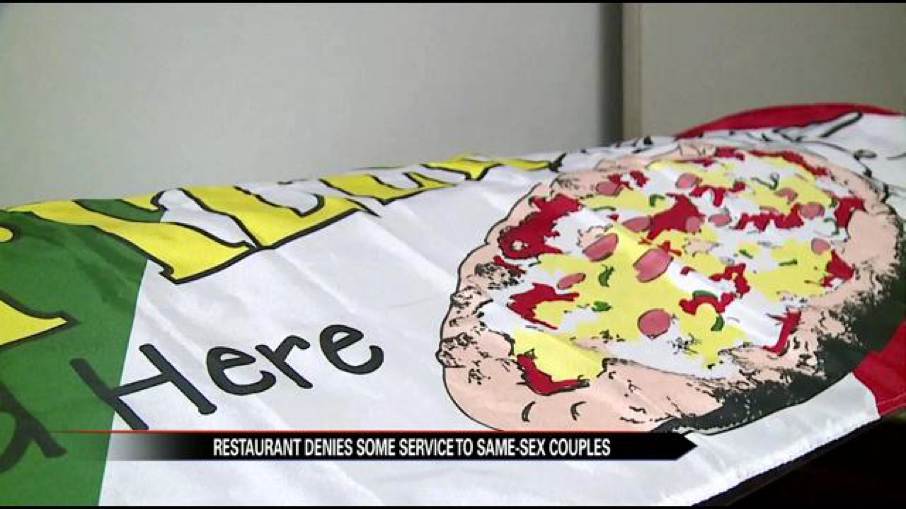 From ABC57 in South Bend's story on Memories Pizza which has gone national. Its caption leaving the impression the restaurant in Walkerton, Indiana already discriminates.

Naturally, with all the fuss going on in Indiana, my first thought came swift: “What couple — gay or straight — orders pizza for their wedding?” Especially these days with so many guests going gluten-free.

Reading on, I learned this:

Owners of a family-run pizza shop in Indiana say they would decline to cater a gay marriage under the state’s controversial new Religious Freedom Restoration Act.

“If a gay couple came in and wanted us to provide pizzas for their wedding, we would have to say no,” Crystal O’Connor of Memories Pizza in Walkerton told the local ABC affiliate on Tuesday.

Catering choices aside, a more serious question came to mind: How would that local ABC affiliate come to know the RFRA position of a tiny pizza shop in the middle of nowhere? Did Memories Pizza post it on their Facebook page? Boldly declare it with a Tweet? Post a picture of a rainbow-colored pizza with a slash through it on Pinterest? Did a local call up complaining about a sign on the door, “No Traditional Marriage, No Service”?

Curious, I followed the link to the original news report on ABC57 in South Bend. What a stunning exposé, not of Memories Pizza, but of how the media work. We know about Memories Pizza because, anchor Brian Dorman informs us, “we went into small towns tonight” to get reaction to the RFRA and found one business “just 20 miles from welcoming South Bend that has a much different view.” We haven’t even gone to the live remote yet, and already we’re told these folks are unwelcoming.

Up pops reporter Alyssa Marino live in Walkerton. Marino says she’d gone to several businesses. She doesn’t tell us what those businesses had to say. (Most likely, “Praise the Lord and Pass the Credit Card.”) Why didn’t we get to hear from them? Easy. Their answers didn’t fit the narrative.

But then Marino hit pay dirt … when she was welcomed into Memories Pizza.

She found a Christian business — though curiously not one usually associated with the wedding industry — willing to answer a hypothetical in a manner fitting the media storyline.

They hadn’t been asked to cater a same-sex wedding. But in the one in a million chance a homosexual couple came in and said, “Could you bake us a dozen pies for our wedding?” Memories Pizza honestly revealed their answer would be, “Due to our religious beliefs we have to say ‘no.'”

Marino lucked out further. The main interview subject, Crystal O’Connor, was a young woman short on nuance and easily made to look like a naïve, country rube. “We’re not discriminating against anyone,” she said. “That’s just our belief and anyone has the right to believe in anything,”  she says.

Meanwhile, there’s a graphic running throughout entire report: “Restaurant denies some service to same-sex couples.” See how that works? An answer about catering a hypothetical same-sex marriage is turned into a statement of fact about current discrimination against all same-sex couples.

We get shots of the crosses and prayers on the walls. Expressions of the O’Connor family’s devout beliefs.

Then we hear Marino’s almost mocking tone as she describes’ O’Connor’s father Kevin: “You can say he’s set in his ways.” And right on cue, we get a brief clip to paint him as a religious bigot out of touch with the times, not just a guy trying to faithfully serve pizzas and his God.

Beat over the head is right. Since the story aired Tuesday night, the Memories Pizza entry on Yelp! has been deluged with hostile reviews. Almost 2,000, as of Wednesday evening – in a town of only 2,248. Before Tuesday, the pizza shop had been only given two reviews on Yelp total.

I would link to their Yelp entry, but indecent imagery is now plastered all over the site. Should we be surprised? It’s not enough to disagree. Those who resist must be denigrated, humiliated and destroyed.  The O’Connors are not an opportunity for dialogue and understanding, but a target of opportunity.

The knives are now out to dispatch their business. Protesters stand in front of their shop. CNN, Gawker and other national outlets are all over these folks like melted mozzarella. And again, why? Have they refused service to any homosexuals? No. That fact is not captured on tape and is only mentioned in passing as part of the story’s tag.

Did Memories Pizza in tiny Walkerton, Indiana seek to insert itself into a national – and arguably manufactured – uproar? No. They simply welcomed a TV station into their shop with an appetite not for pizza but for Christian business owners.

For nearly 10 years, the O’Connor’s have been loyally serving the people — all people — of Walkerton. Now, thanks to the media and those aiming to silence those of faith, they’re the ones being served up on a plate.