By working with President Trump, Van Jones made enemies in the “resistance” movement. Now his new TV series sets the stage for further steps in criminal justice reform. 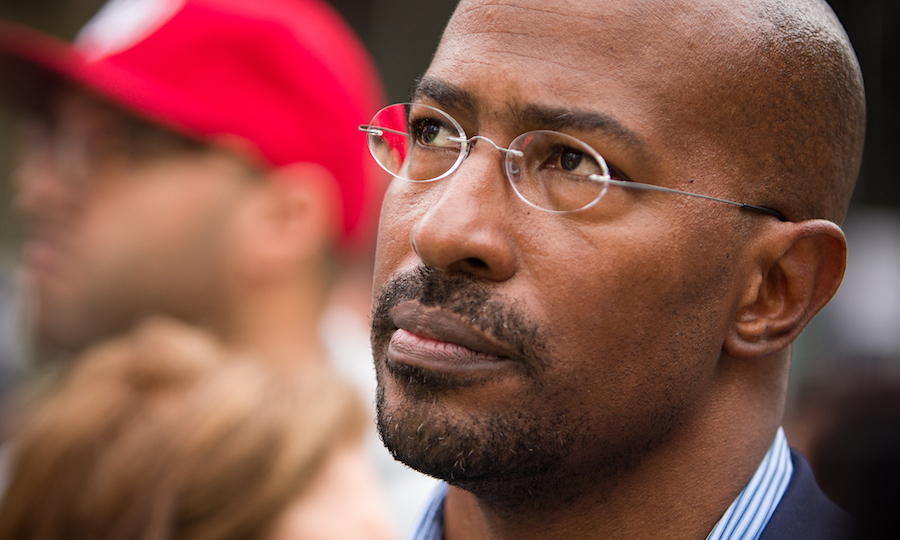 In The Redemption Project, justice reform advocate Van Jones presents real-life stories from across the U.S. Each episode follows the victim, or surviving family members, of a life-altering crime as they journey to meet face-to-face with their offender in hopes of finding healing.

In these bitterly partisan times, President Trump has managed to earn near-unanimous praise on one issue: Signing into law the First Step Act in December 2018. Even his fiercest critics called the elevation of criminal justice reform “unifying,” “gracious” and “powerful.”

“I believe forgiveness, healing and hope should be in prime time,” says Van Jones of his series The Redemption Project. “You’ll hear the word ‘God’ mentioned more times in this one hour than probably the rest of the week on CNN. Cable news has such a secularized view.”

He notes the show’s Sunday night time slot presents challenges. “We really need people to tune in live or to DVR it, because we’re up against Game of Thrones!”

Jones partnered with state and local justice advocates across the U.S. for the series, which reveals true-life stories. Each episode brings together victims, or families of victims, with their offender currently imprisoned. Emotions run deep as viewers hear each side of complex, life-altering crimes.

In a phone interview, Jones opens up about the heart behind the show, his Christian faith… and why he’s willing to take criticism for working with the Trump administration.

The Fight for Justice

Some observers here in Washington are baffled by how you have crossed political dividing lines. How do you respond to critics? Van Jones: Listen, I have worked inside of prisons and in criminal justice for 25 years.

I’ve never met anybody behind bars who told me: Van, I’m suffering. I miss my family. I want to be able to get out. I’m being brutalized in here. Please, help me get out. But, whatever you do, do not talk to any Republican.

Nobody behind bars cares. They don’t care who is in the White House — they’re trying to get home to their own house! People on Twitter who are saying mean stuff to me, I always say: My worst day on Twitter is better than anybody’s best day behind bars.

If you’re on Twitter saying mean stuff about me, here’s what I know. You’re not in a federal prison, because they don’t have Twitter in prison!

How does your CNN series differ from true-crime TV shows that have become so popular?

Jones: The Redemption Project is different from other true-crime series because it’s literally the opposite end of the problem.

It’s not: Who done it? We know who done it! We’re talking to people we already know have done really bad things, who want to make amends — sometimes ten or 20 years later. So we talk to those people and we also talk to those people that they hurt. All too often, it’s the surviving family members.

Then we film those two people coming together and talking to each other for the very first time. I’m gonna tell you: If you have any money, invest in the Kleenex Corporation. Because I haven’t seen anybody watch this show that hasn’t dabbed their eyes at least a couple of times watching this process.

Everybody in the true-crime world thinks that, once you get the verdict or once the person is released or convicted, that’s the end of it. It’s not true. Decades later, you still have people who are suffering and who still don’t know exactly what happened.

They still have questions and haven’t been able to take the next step on their healing journey. This show is about that part of it. It has all those true-crime elements, but it takes it much deeper.

Where Reality TV Has Never Gone Before

What do you hope to see happen when these victims or families of victims meet face-to-face with their offenders?

Jones: By the time we’re showing them meeting, I’ve already spent hours and hours with both sides. I know much remorse the person who committed the crime feels. And I also know the areas where they may be tender or defensive or feel misunderstood.

But the audience also know what a wrecking ball that person has been in the lives of the surviving family members or the victim. We can see how much pain they’re carrying.

As I’m sitting there watching those two parties talk for the first time, I’m pulling for both of them. I have the humanity of both of them fully in view — by that point, the viewer does as well. I’m hoping there can be something that happens, a healing step for both of them.

“When people see this unfold, we’re all hoping both sides get one more healing step.”

Of the eight episodes, in two of them the surviving parents cannot get to a warm and fuzzy place of forgiveness. That’s perfectly fine. But they do get information they did not have before, and they get the opportunity to express themselves in a way they didn’t get a chance to a decade plus earlier in court.

At the same time, three out of the eight surviving family members and victims go to court and try to get the person out of prison! You literally have the full range of possibilities in the face of human pain.

Sometimes miracles happen, and sometimes they don’t. When people see this unfold, we’re all hoping both sides get one more healing step.

Faith At the Center

Emotions are raw when victims meet their offenders. To direct these conversations, do you and your team draw on Judeo-Christian values?

Jones: I can’t speak for the whole team, only for myself. I grew up in a Christian Methodist Episcopal Church. My grandfather was Chester Arthur Kirkendoll, a senior bishop in the CME church when I was growing up.

“You’ll hear the word ‘God’ mentioned more times in this one hour than probably the rest of the week on CNN.”

A lot of the participants on both sides — the offenders, as well as the victims and survivors — rely on their faith a great deal throughout this whole roller coaster of a process. It takes Olympic levels of moral courage for both parties to walk in the room and sit down. That by itself is a miracle worth celebrating.

On the one hand, people who do wrong have to pay a price. There has to be accountability and responsibility. At the same time, a victim or surviving family member continue to live in their own kind of prison. Even when the offender goes away to prison, they’re still in a prison of pain, or lack of information. What happened? What were my loved one’s last words? Why did this happen? Did this person even care? Is this person a monster?

The only person who has the key to unlock the prison for the survivor is the person who is behind bars. By bringing those two people together, a miracle of grace can happen in both directions. That’s why I am committed to this work.

With the First Step Act last year, why did you lead the Left to work with the Trump administration?

Jones: To help people behind bars, I will work with or against anybody in any party. I know it’s shocking to people to see such a strong liberal walk into the Trump White House.

The fear they have is: You’re helping this horrific, bad person. I understand that fear. But there are people on the right who have fears of the Left. They see that the Left may be moving in a totalitarian direction, and it scares them.

Our job is not to walk in fear. It’s to walk in faith. It is to find those on the battleground where bad things are happening. For instance, I don’t want to see mothers having their babies taken away from them at the border. Where there’s a battleground, I’ll show up.

But we can’t just fight and still have a country. Where there is common ground, we have to be just as passionate and excited about working on the common ground as we are on fighting each other on the battleground.

None of those people are mad at Van Jones for shaking hands with Donald Trump to help secure their freedom.

Today, the Bureau of Prisons has only an Acting Director. Could you provide an overview on the implementation issues that have cropped up with the First Step Act?

“There is division in our country over how far and how fast to go toward fixing and reforming the system.”

There is division in our country — as well as in the Republican Party and within the Trump administration — over how far and how fast to go toward fixing and reforming the system. At times, we’ve run into internal roadblocks to progress but we keep pushing and keep fighting.

#Cut50, the bipartisan organization I helped to found about five years ago, led by the great Jessica Jackson, is in daily contact with the Trump administration, the Department of Justice and Bureau of Prisons fighting through all these implementation issues.

If people want to be helpful, #Cut50 and Reform Alliance are two organizations I believe make a difference.

Why do you believe restorative justice is a cause worth fighting for?

Jones: Because all of us make mistakes, and all of us are better than our worst day and our worst decision. When people are victimized by crime and wrongdoing, they aren’t always healed just by hearing somebody else is going to be hurt by going to prison. Sometimes people need more than that. Right now, our system doesn’t recognize any of that.

We need a system that holds people accountable for doing bad stuff. I’m not a part of any pro-crime lobby. What I do know is when people have been hurt, they sometimes need more than just knowing that a jury somewhere said somebody was guilty.

Airing Sunday nights on CNN, The Redemption Project with Van Jones premieres on April 28. Sign up to receive top stories from The Stream every week.