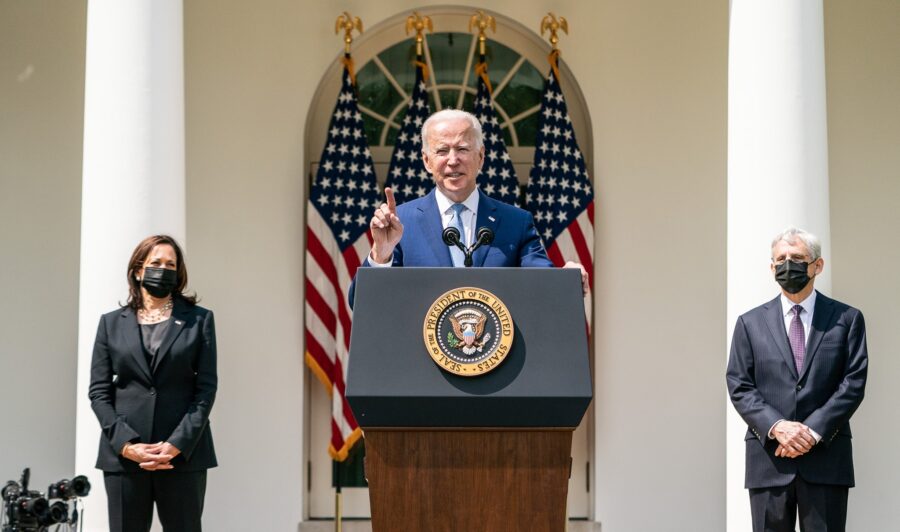 Mind if I kvetch for a moment? Unlike my colleagues, I am not a natural wordsmith. Growing up, English class was that 50 minutes between lunch and a subject I was good at. My vocabulary is as wide as a creek in a neighborhood filled with rivers.

So imagine how frustrating it is that the Biden-Harris administration keeps changing the definition of words I do know.

For example, “infrastructure.” Since I was a bright-eyed little pup, infrastructure meant bridges, roads, dams, power grids, water and sewage systems, and the like. That which facilitated the movement of people, goods and utilities, and tied our communities and country together. Or to be more formal, “basic physical and organizational structures and facilities.”

In other words, infrastructure now means “anything we want to spend your money on.” Thing is, if a word can mean anything, it means nothing.

Growing up on the Washington Beltway, “bipartisan” was almost as familiar a word as “bicycle.” It meant the Democrats and Republicans in Congress and/or the White House working in concert on an issue. Think the bipartisan welfare reform law crafted in 1996 by the Democratic Clinton White House and Republican Newt Gingrich House of Representatives.

No more, according to Biden. “Bipartisan” now means as long as a Republican somewhere in the universe agrees with what we want to do, that’s “bipartisan.” Mao-loving Biden advisor Anita Dunn explains: “It doesn’t say the Republicans have to be in Congress.” In other words, if we want to ram through a $3 trillion “infrastructure” bill without a single vote from a single Republican Senator or House member, but some MSNBC talking head RINO doesn’t complain, that’s “bipartisan.”

Another Biden senior advisor, Mike Donilon, defines “bipartisan” as “an agenda that unifies the country and appeals across the political spectrum.” Except the administration has done nothing to unify the country and has proven they care less what Deplorable Trump voters think. And anyway, how would that unity be marked in politics? By elected politicians agreeing.

Like with “infrastructure,” “bipartisan” means “whatever we want it to mean.” Imagine making up your own definitions in Mrs. Rubenstein’s English class back at Oxon Hill High.

Imagine a president taking aim at one of our most treasured principles.

Erasing Words to Erase the Border

The Biden-Harris Administration also likes banning familiar words. As you know, the White House refuses to use the word “crisis” to explain the disaster at the border, insisting on calling it a “challenge.” Biden accidentally slipped and used the word Saturday. No ice cream for him Saturday night.

On Monday, the White House said the president’s use of “crisis” doesn’t represent the administration’s official position. Biden, a White House official told CNN, was not referring to the border crisis when he spoke of the “crisis.” He was referring to the situation in Central America that they claim caused the historic surge at our border. Sure. Okay.

The language games continue. The Biden Administration has now forbidden ICE and CBP from using the term “illegal alien.” They insist on the phrases “undocumented noncitizen, undocumented individual, or migrant.”

“Undocumented,” as The Stream’s John Zmirak and I point out in our Politically Incorrect Guide to Immigration, is actually a bogus term. A good percentage of illegal immigrants in our country carry documents all right. Phony ones.

I have enough confusion in my life without our leaders deliberately confusing matters of national importance.

These language games sacrifice clarity in order to sabotage our sovereignty. Biden wants no distinction between those who followed the rules and those who don’t.

For the record, as Fox News notes: Federal law uses “alien” for “any person not a citizen or national of the United States.” It also often uses the term “illegal aliens.”

“Assimilation” is Now a Four-Letter Word

Finally, and perhaps most worrisome, Biden is also trashing our national motto. E Pluribus Unum. “From the Many, One.” Oh, the trashing’s subtle, but it’s there. The order to ICE and CBP calls for the ditching of the word “assimilation” in favor of “integration.”

“Assimilation” is the treasured American Melting Pot. Assimilation is the process of blending into American society the “huddled masses yearning to breathe free.” Assimilation is teaching newcomers America’s founding principles, showing them the road to the American dream, so they can fully be members of the American community. Assimilation is what turned the children of the early 20th century immigration boom into The Greatest Generation.

Assimilation is what immigrant-turned-Founding Father Alexander Hamilton meant when he spoke of “The Harmony of Ingredients.” For the American experiment to work, he believed, we welcome the flavor of newcomers so long as they don’t poison the pot.

Except those on the left — those currently in power — think America is rotten to the core. Rotten from the founding. That the stock in the Melting Pot is foul. This makes “assimilation” a four-letter word.

Woke theology and Critical Race Theory hate the notion of “From the Many, One” — one unified people in harmony. They despise the idea of teaching newcomers the greatness of America, the beauty of the American Dream, helping newcomers become wholehearted Americans, as we did in generations gone by.

It’s not enough to change the meaning of infrastructure, or bipartisan, or immigration, or assimilation. The goal is changing the very meaning of America.