Operation Blue Shield and "The Power of One" gatherings chart a way forward.

Last week, an NYPD cop was gunned down in cold blood, the fourth New York police officer murdered in less than a year. Before the funeral arrangements for Officer Randolph Holder were even set, the Black Lives Matter movement was back in the streets condemning New York’s police for its alleged targeting of the African-American community.

This week, outrage spread over a video showing a white officer in South Carolina body-slamming a black female high school student. The Justice Department immediately launched a civil rights investigation, and the officer was quickly fired. 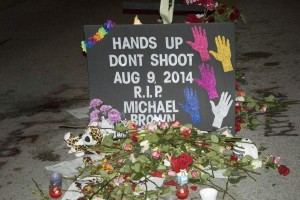 Since a highly-publicized series of deaths at the hands of police — from the sensationalized shooting of Michael Brown in Ferguson to the sickening gunning down of Walter Scott in South Carolina to the mysterious death of Freddie Gray — intense heat and light has been generated over the relationship between police and the inner city communities they serve.

“Hands Up, Don’t Shoot” may have been an invention, but there’s no inventing — or avoiding — the distrust of police in some urban communities.

And there’s no inventing — or avoiding — the dramatic spike in homicides in many of those same communities since activists began criminalizing cops and canonizing criminals, a rise even FBI Director James Comey believes may be connected to the so-called “Ferguson Effect.”

Last night, a mixed-race gathering of civic, law enforcement and religious leaders met in Dallas, looking for ways to heal the damaged relationship between peace officers and the people they’ve sworn to protect.

“The Power of One” gathering was sponsored by Operation Blue Shield, a campaign founded by Toni Brinker Pickens seeking to help improve relationships between inner city communities and law enforcement. 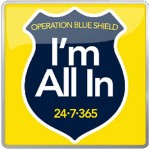 Brinker Pickens says she was moved to act during a visit to New York last December. Protesters were marching past her hotel window, chanting. She thought she had misheard what they were saying and flipped on the TV to live coverage of the event. She had not misheard and was horrified by their words: “What do you want? Dead cops! When do you want them? Right now!”

She returned to Dallas convinced of the need to do something to help restore the respect and trust of police officers. She called Dallas’ mayor and police chief and set to work. Operation Blue Shield was born.

Brinker Pickens argues there is a profound practical impact from police and communities working together: Safety brings prosperity. Safety helps pave the way for prosperity, and provides a sense of security for all parents concerned about their children’s well being. It also helps create opportunities and jobs when business owners feel safe.

At the same time she expressed keen sympathy for the families trying to make do in violent neighborhoods, and passed along some of the experiences shared with her during her work. Right now, she said, you have neighborhoods where moms are too scared to walk to a bus stop to look for a job. Kids are afraid to have bedroom lights on late for fear a gunshot may come through the window. And the Ferguson and Baltimore riots made clear the dangers for local businesses. 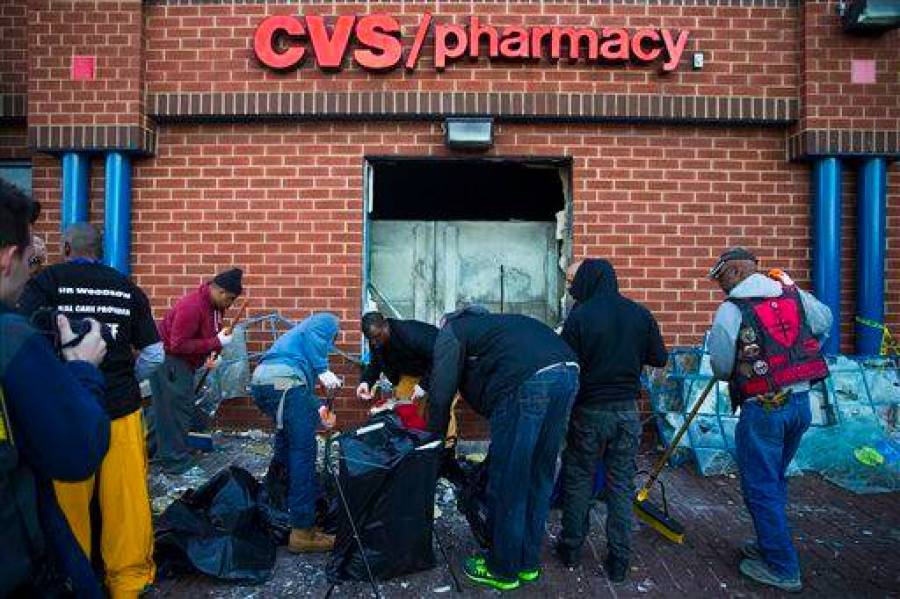 But what if the police and community could work together, she asks. Then you might begin to see stability and economic growth.

Pastor James Robison, founder and publisher of The Stream and co-host of LIFE Today, was one of the three pastors at last night’s event. He reinforced Brinker Pickens’ economic message. “It is only in an atmosphere of safety that small business can be established and thrive, providing job opportunities for young people and their parents,” Robison said, “Safety greatly enhances school attendance, respect and positive relationships within the entire community.”

It’s no quick fix. On Friday, FBI Director James Comey talked about the “chill wind” blowing through law enforcement. He said officers felt like “they were under siege” and didn’t “feel much like getting out of the car.”

Even President Obama, days after legitimizing Black Lives Matter and grievances against police, agreed Tuesday that “Too often, law enforcement gets scapegoated for broader failures of our society and our criminal-justice system.”

This should not be the case, says Robison. “Law enforcement and police officers should be seen as best friends of those who desire a sense of safety and security.”

Brinker Pickens says she’s working toward the day when a kid from the inner city can say, “I know that policeman down the street. He’s my buddy.”

Operation Blue Shield began in February by promoting blue and yellow ribbons symbolizing support for peace officers, and since then has launched numerous outreach programs, including:

The Power of One

“The Power of One” event last night at the Inspiring Body of Christ Church in south Dallas continued the conversation. The series brings religious leaders from divergent backgrounds to share insights and work toward improved relations between police and the neighborhoods they serve. 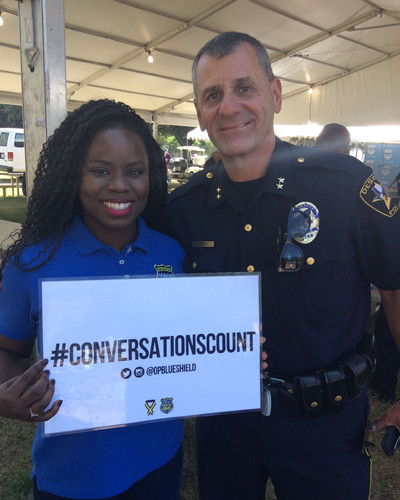 A common message conveyed by the three men — one white, one black and one Hispanic — was the need to develop one-on-one relationships to build trust, and for God and the church to be central to the effort.

Bishop Nunez, who grew up a cop-hating thug before finding Christ, and who spent this spring watching his city of Baltimore burn, said, “Let’s face it, there are some bad apples among the police.” But his primary focus was on the challenge faced by all the well-intentioned in the community and the inner city mindset that must be overcome:

If I am hurting, if I am broken, if I have been rejected, if no one loves me, you can’t come into my neighborhood and tell me how good you are and offer me some program that’s never going to work because I don’t trust you from the get-go. So you have to establish trust with me and then I may be able to believe and say, “You know what? I need to partner with you. I need to check out your background. You know, when your police car comes around I am watching out for you and I’m telling my boys, ‘Don’t touch that man.'”

Robison also emphasized the importance of relationship, offering that his own success in ministry starts with showing the Father’s love, demonstrating to those seated before him, “I care.” He praised those engaged with Operation Blue Shield for having a similar heart. “Toni Brinker Pickens also cares, as well as all who gathered here tonight.”

Bishop Jackson pointed out that the breakdown of trust and respect for authority happened over generations and will take years to repair. “I think that the only way the police force, the law enforcement folks can really be effective is if they join together with the peace makers, who are the church,” he said.

Robison agreed that the church bears the crucial burden:

If the church does not address the needs of this nation, we will lose freedom. The stage is set for the worst riots of this generation. And if the church does not become that voice of reason and healing, and compassion and love, we will see it. If love does not manifest in more than word only … if that does not build with a great momentum I do not think we can describe the horror that we will witness in this nation. I personally believe we will either get on our knees as a people or we will be knocked to our knees. One way or another, we will get on our knees.

Bishop Nunez agreed, saying, “If the church does not rise up, we lose.” He described practical examples of what he does at his church. For one example, he invites police officers to his services just to honor them. When his congregation sees him embrace officers, “They follow me.”

Rev. Rickie Rush, whose church hosted “The Power of One” event, chimed in, telling visitors that his mega-church actually contains a police station. It provides a place for officers to get out of the heat, hang out, get something to eat or drink, while his congregants get to spend one-on-one time with police in friendly, non-confrontational settings. That helps build relationships and a sense of community.

Brinker Pickens put it this way: 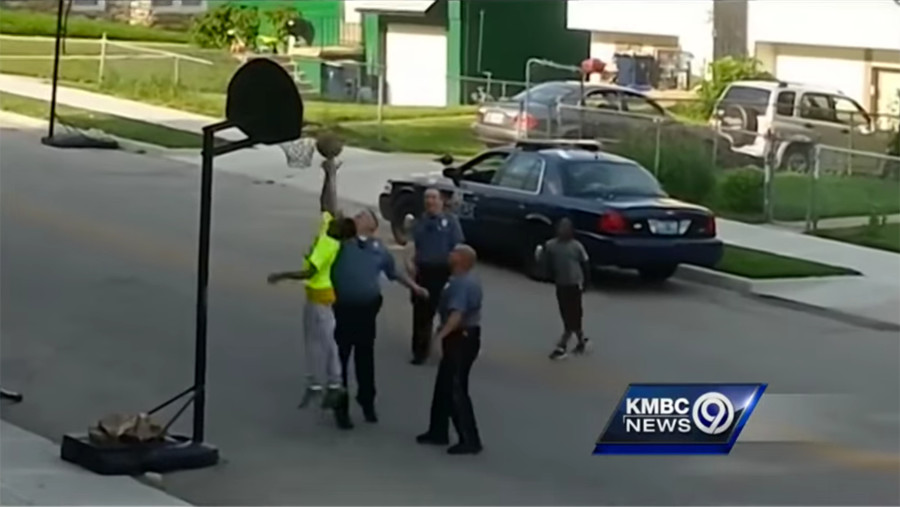 Courtesy of Pastor Rickie G. Rush and Inspiring Body of Christ Church, The Stream is able to share with you Wednesday night’s powerful Operation Blue Shield event, “The Power of One.” If you are at all interested in healing the wounds of our troubled cities or supporting our law enforcement communities, please watch this video, and share this story. And go “All In.”