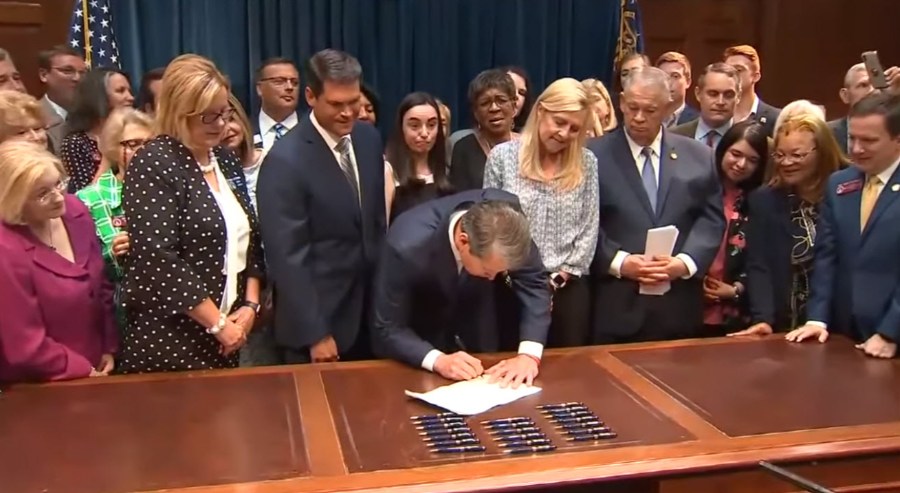 Georgia governor Brian Kemp signs the the LIFE Act, also known as HB 481, on May 7.

“Today, I signed into law the Alabama Human Life Protection Act (H.B. 314), a bill that was approved by overwhelming majorities in both chambers of the Legislature,” Alabama Governor Kay Ivey said in a statement Wednesday. “To the bill’s many supporters, this legislation stands as a powerful testament to Alabamians’ deeply held belief that every life is precious and that every life is a sacred gift from God.

The Act Ivey signed outlaws abortion. Women who wish to get an abortion won’t lawfully be able to do so at any stage unless the pregnancy endangers her health. Abortionists who do perform the procedure could be sentenced to prison for up to 99 years (the mothers will not be charged). The bill is the most pro-life legislation on the books.

Alabama isn’t the only state that has enacted pro-life laws. The cause for life is on a roll.

Last week, Georgia’s governor Brian Kemp signed the LIFE Act (H.B. 481) May 7, 2019. This Act outlaws any abortion after a heartbeat is detected, around six weeks. However, it does make an exception for cases of rape and incest, or if the pregnancy is not viable. “Georgia is a state that values life,” Kemp said. “We stand up for those who are unable to speak for themselves.” Georgia is the fourth state to sign into law a “heartbeat bill.” It is slated to go into effect January 2020.

Last month, Ohio’s governor Mike DeWine signed into law the state’s “heartbeat bill” (S.B. 23). It only allows abortions to save the life of the mother. It will become effective July 11, 2019. Violation of this law will incur a fifth-degree felony for an abortionist. In addition, the state can fine abortionists $20,000 for each offense. Money collected for the violation will support adoption and foster care services.

The Missouri state House Friday voted 110-44 to outlaw abortions after 8 weeks. Only medical emergencies, not rape or incest, would provide an exception. It is now headed to Governor Mike Parson’s desk. He is expected to sign it into law.

Earlier this year Kentucky and Mississippi signed into law similar “heartbeat bills.” During the first few months of 2019, 14 states have introduced, moved, or enacted 6-week bans.

While all this pro-life legislation is encouraging, others are warning that it will bring on division and provoke anger from pro-abortionists.

A Civil War is Coming

“A civil war is coming to America, only this time, it will be abortion, rather than slavery, that divides the nation.”

In an article published Thursday in The Stream, Dr. Michael Brown explains how those on the left are losing their minds over the latest pro-life laws.

We witnessed some of this during the hearings for Brett Kavanaugh, when the opposition to his confirmation was fierce to the point of screaming and pounding at the Senate’s doors. …  As expected, the reaction from the left has been fierce and intense. … The only way to describe this is war.

Jennifer Hartline, in her Stream article titled “It’s Not Kavanaugh. It’s Roe” explains why Kavanaugh was so fiercely opposed. “They hate Kavanaugh because they love abortion and he does not. Hell hath no fury like ‘women’s rights’ scorned.”

Some women in Congress have promised to fight the new Alabama pro-life law on abortion. They said that it was “dangerous” and “exceptionally cruel.” They described it as a war on women and that women’s rights are under attack. Among those women were Nancy Pelosi, Kirsten Gillibrand and Elizabeth Warren.

Brown concludes, “Do we need this spelled out any more clearly? We are being told that those who stand for Roe v. Wade will fight like hell, that there will be people in the streets, that this is a battle, a war. We dare not miss the meaning.”

In this battle, pro-lifers need to be prepared and avoid pitfalls that might play into pro-abortionists’ hands.

According to John Zmirak, in his Stream article published Thursday, there are three pitfalls of which pro-lifers need to steer clear:

There have been more than 55 million abortions since Roe v. Wade became the law of the land. But thankfully, the tide of the war against the unborn is turning. Let’s continue praying and working to see that life achieves a full victory.