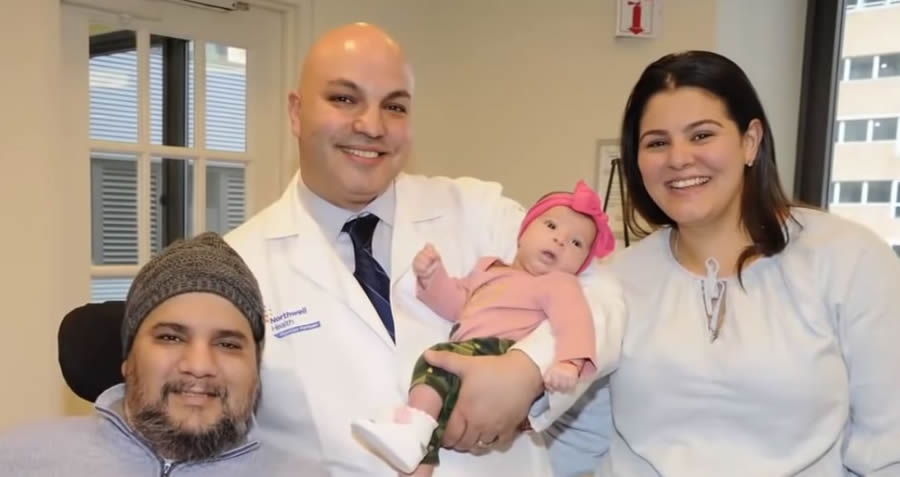 “I’ll never forget the words [my doctor told] me, ‘Mazel Tov! You’re pregnant!” Sahily Machado and her husband, Visnu Gonzalez, a Marine and Iraq war vet, tried for years to get pregnant and now they were. The miracle? During Visnu’s time in Iraq he was hit by sniper fire and paralyzed. He’s a quadriplegic.

“I always knew I’d become a father,” Visnu, who has limited use of his arms, told Good Morning America. But it was an uphill climb. Both Visnu and his wife had fertility issues. The couple was told that the only chance of having a child was through in-vitro fertilization or artificial insemination.

Then they met Dr. Tomer Singer. Not only was Dr. Singer the vice chair and OB/GYN at Lenox Hill Hospital in New York City, he had also been conceived through artificial insemination. His father had been shot during his time in the Israeli military in the 1960s and was paralyzed. “Visnu’s injury was very similar to my father’s injury,” said Dr. Singer. “I remember the day we met and they came to my office. It was a very emotional day for the couple and myself.”

After almost three years of treatments Sahily became pregnant. On December 28, 2018, she gave birth to a baby girl. They named her Lia Valentina. Gonzalez says watching his baby daughter’s birth was wonderful. “When you see that baby coming out … it’s wonderful, especially when you’ve been trying for so long. It’s pure joy.”