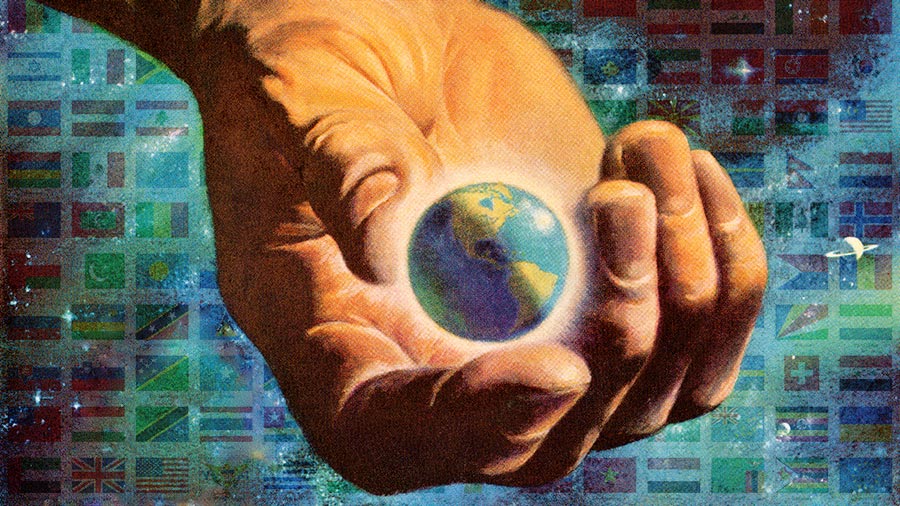 When I was a boy, my Sunday school teacher Mrs. Gruber used to say, “History is His story.” As a kid I was delighted by the wordplay, but I didn’t realize at the time that Mrs. Gruber was also a homespun philosopher.

Christians of all traditions have always believed in divine providence — that God is in charge and he is constantly at work to bring to completion his greater plan for the human race. The stories of the Bible unfold his working, first through the Hebrew people, then in the revelation of his Son Jesus Christ. The Bible calls Jesus the Alpha and the Omega, the beginning and the end, and Mrs. Gruber echoed that when she told us “History is His story.”

That providential plan for human history is played out in the lives of ordinary people. For those who have eyes of faith, God’s will and way is being completed in both the triumphs and the tragedies of life. What we see as failures he wants to turn into growth points. What we see as disasters he wants to use as stepping stones to greater goodness.

God’s great drama is also played out on the stage of politics. This is why the characters of the Bible are involved in the politics of their day. Moses confronts the Egyptian Pharaoh. David clashes with the Philistines. Elijah stands up to Ahab and Jezebel. Daniel goes head to head with the Babylonian King. Jesus stands before Pilate and Paul is caught up in the politics of the Roman Empire.

God’s providence is not cut off from politics. Instead, the political power games of this worldly system intercut and connect with the power of God at work in the world.

There is an old saying that “God draws straight with crooked lines.” In other words, “God’s ways are not our ways.” If we were in charge, we’d set things right. If we were super powerful, we’d make sure the good people were in charge and nobody would have to suffer.

God doesn’t do it that way. He is open to our choices. And when we make bad choices, and things go disastrously wrong, he still brings the whole thing around to accomplish something better. The example of Jesus Christ’s death proves the point. We did the very worst thing imaginable. We tortured and killed the Son of God who was sent to save us. God turned that terrible deed around and used it for our salvation anyway.

This should be a lesson for Americans as we go into a presidential election in this most upsetting and unpredictable year. The candidates we have to choose from may not seem ideal to us. They are both flawed and faulty human beings. We may find it impossible to agree with all their policies, and whoever wins, some Americans will feel disappointed, angry and afraid.

Many fear the result of this election will be pandemonium. “Pandemonium” is defined as a noisy uproar, chaos, bedlam, disorder and anarchy. What causes pandemonium?

Beneath the disorder, riots, violence and chaos is a crisis of belief. If you believe history is “His story,” then the foundation of your worldview is one of order and a divine plan. Consequently, despite your worries and fears you will have a much deeper trust in divine providence. No matter what the political outcome, you will have confidence that God will bring about the best in the end.

“A power struggle between warring factions” is another way of saying “pandemonium.” If there is no overarching plan, then all is random and if all is random, then we should not be surprised that everything falls into chaos and disorder. When things fall into disorder and violence, balance can only be restored through force. And that means tyranny.

The Beginning of the End

The energetic and funny hero of the film The Best Exotic Marigold Hotel says, “Everything will be alright in the end … and if it is not alright, it is not the end.” That’s a smart way to express trust in divine providence.

This is why time and again throughout the great saga of salvation, the messengers from God say to frightened human beings, “Do not be afraid!”

Have we been through a troublesome year of disorder, unrest, confusion and fear? Yes. Might we be going into a time that is even worse? Are we facing the beginning of the end? Could society break down even further into division, violence and even civil war? It has happened before.

But for those who are able to hear Mrs. Gruber, “History is His story.” God is in charge.

Do not be afraid!

Dwight Longenecker latest book is Immortal Combat-Confronting the Heart of Darkness. Connect with his blog and website at dwightlongenecker.com.