Repeal Obergefell: Christian Group Holds Rally at the Supreme Court on the Fourth Anniversary of the Decision 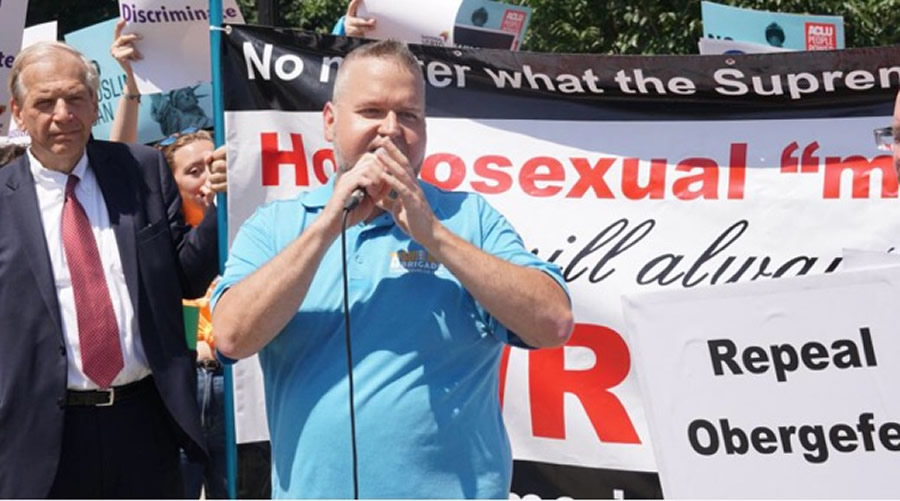 “I think the average Christian has no clue about this freight train that’s coming.”

Peter LaBarbera, president of Americans for Truth About Homosexuality, told The Stream that the homosexual agenda is the most powerful force in society today. “It’s the most powerful special interest on the side of law that’s not on the side of God.” LaBarbera says that a lot of Christians just kowtow to the formidable group — perhaps because they don’t want to create a ruckus or maybe their pastor doesn’t preach on the issue of homosexuality.

LaBarbera’s goal? To overturn the ruling in 2015’s Obergefell. He wants Christians to see the issue as just as important as the right to life movement has been. So far, he’s seen Christians compromise on “gay marriage.” “We can never give up on that. It’s not really our truth: It’s God’s truth. We have to put a stake in the ground and say ‘we’re never giving up on this.'”

The conservative movement, says LaBarbera, has largely moved away from the issue. “And now, Christians are starting to move away. My attitude is, if there’s sort of a movement — I call it a sin movement — for homosexuality and so-called rights based on homosexuality, then how can we not have a counterforce that’s telling the truth?”

LaBarbera argues Obergefell was based on a false premise. “If you look in the decision, Kennedy calls homosexuality immutable.” It’s shocking how “ill-informed the court is.” In addition to using a “mythical dogmatic ideological gay narrative,” the Supreme Court is “basically sort of the moral and legal dictators for the country, making laws and rewriting state constitutions.” For example, the Supreme Court’s decision overruled 32 state amendments, says LaBarbera. The idea that homosexual isn’t changeable, but something that defines a person is “an ideological construct of the other side and yet it ends up in a court decision as the basis for this sort of imperious law.”

Sin as a Civil Right

Many people have walked away from their homosexual lifestyle. In fact, some of the speakers at today’s event are former homosexuals.

LaBarbera goal for the rally? “We want to educate people on the effect [Obergefell] has had, that it will continue to have.” For example, the homosexual agenda’s push to indoctrinate children. “Gay marriage is only helping to indoctrinate kids further because if it’s marriage, then it’s of course acceptable. It should be taught to children as a viable option as they grow up, right? So, we want to highlight this anniversary to educate people on this destructive court decision.”

The freight train, for LaBarbera, is the newest movement he calls “gay theology.” “It’s completely intended to win over the sort of winsome-minded evangelical who wants people to like him so he can share the Gospel. [Homosexual activists are] playing to the goodness of Christians in order to convert them.” Homosexual activists have put up an active campaign to convert Christians to the gay Gospel. “And I’ve found that they’re actually more zealous in their conversion attempts than most Christians are in the real Gospel to convert people for Christ.”

There are so many ways that Christians can “cop out” of the homosexual agenda issue. It takes prayer and a conscious and deliberate attitude of “‘God, I want to be faithful to to your word. How can you help me do that? I’m going to take a stand.'” The gay agenda seems bent on gunning for the church. “It’s because the church is really the last bastion of opposition that there is. …That’s why I think you see this really big battle now of ‘gay Christianity.'”

The event today at the Supreme Court will be livestreamed. Speakers will discuss the issue of the homosexual agenda, how the Obergefell decision impacted and continues to impact culture and the issue of transgenderism.

LaBarbera anticipates protests from the other side. But there will also be opportunities to share the Gospel with the crowd. “You have people sharing their testimonies. Last year when David Arthur, who was a former homosexual prostitute, started speaking, it literally went quiet. It’s also a chance to witness the Gospel. And so, we’ll be praying for that.”