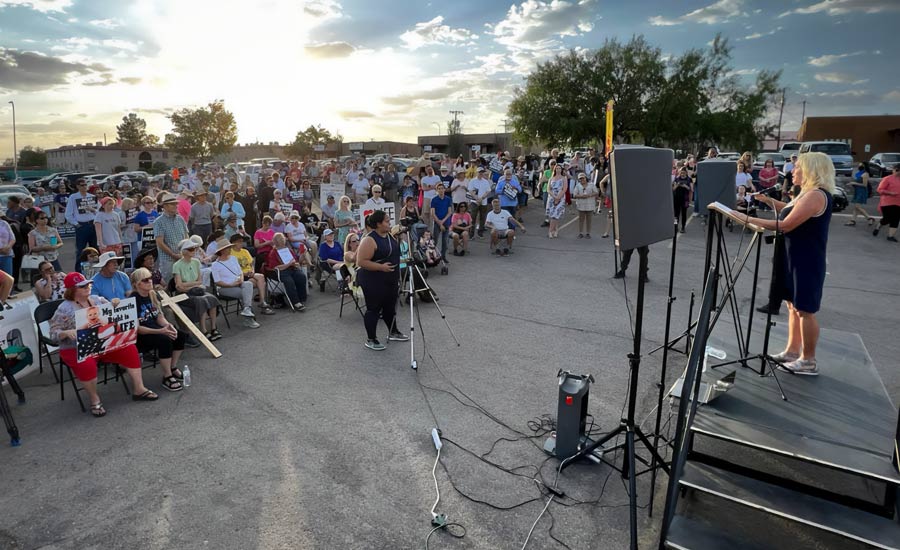 By Southwest Coalition for Life Published on July 21, 2022 •

(July 20, 2022 — Las Cruces, New Mexico) Several hundred pro-life advocates were on hand the evening of July 19, 2022, when Mark Cavaliere, Executive Director of Southwest Coalition for Life, made a surprise announcement. With Las Cruces’ newest, not yet open, abortion business behind him at 2918 Hillrise Avenue, Cavaliere revealed that Southwest Coalition for Life had leased the property right next door and will open a pro-life, pro-woman health center.

“Our nation has taken a huge leap forward with the overturn of Roe,” stated Cavaliere, “but New Mexico has taken a blow. We’re going from having five abortion facilities in the state to triple, maybe even quadruple, that number. In our culture, everything about women has been vilified. We need to work to end abortion, but we have to do more to restore the sanctity of womanhood.”

Cavaliere invited the crowd, “Let’s provide all the health care services that organizations like Planned Parenthood pretend to do … . Let’s actually step up and do more to provide life-affirming health care. If ever there was a place to respond to a challenge like we’re facing, it’s Las Cruces, the City of the Crosses. We’ve seen what God can do. If ever there was a people to rise up and say that women deserve better that abortion and we’re going to be the ones to give them better — it’s the people here.”

Moving in Next Door ‘Before They’re Even Opened’

“This has become the epicenter of post-Roe America with the court case that overturned Roe v. Wade coming to the building right behind us to do surgical abortions, to the second and possibly third trimester,” said Cavaliere. “We were able to lease the building right here at 2908 Hillrise Avenue, before they’ve even opened. A new women’s pro-life, pro-woman Guiding Star health care center will open right here. This is the people, this is the place and this is the time.”

The Guiding Star health center will be separated by only a driveway from the abortion business that fled Mississippi after losing the lawsuit that led to the United States Supreme Court decision in Dobbs v. Jackson Women’s Health, overturning Roe v. Wade. Guiding Star will provide women with fertility care, pregnancy and childbirth, lactation and family life services.

Leah Jacobson, Founder and CEO of the National Guiding Star Project, noted that this is the first time that one of her network’s life-affirming, woman-empowering health centers has opened up right next to an abortion vendor.

Jacobson and Guiding Star focus on addressing the root causes that are driving women to abortion.

‘Pregnancy is Not a Disease!’

“We need to listen to the voices of women that are feeling that abortion is their best option,” Jacobson asserted as she shared statistics of why women seek abortions. “Pregnancy is not a disease! There is nothing healthy about destroying a perfectly functioning female body.”

Terri Herring, president of Choose Life Mississippi in Jackson, Mississippi, explained how the new Las Cruces abortion facility, known previously as Jackson Women’s Health, was closed, and moved from Mississippi. Owner Diane Derzis shut down her “pink house” of abortion after the business lost at the Supreme Court, to a decision that allowed Mississippi to ban abortion.

Herring told the enthusiastic crowd gathered in the 100-degrees plus evening at Las Cruces, “You can close it here too!” She added that Derzis had previously been run out of Birmingham, Alabama, and inspired the pro-life gathering to “free New Mexico from being a refuge for abortion,” as her own community had helped to drive abortion out of Mississippi.

Gallegos criticized the lack of parental notice, reminding the crowd that their minor daughters cannot be given an aspirin without parental permission, yet these young girls can have an abortion performed on them without their parents ever being told. He also emphasized the importance of voting pro-life.

Seibel recounted how over the past seven years, the area pro-life community had closed fetal tissue research centers, stopped late term abortion training programs, made abortionists quit and go back to Maine, and closed three abortion facilities in the Borderland. As Seibel’s report provoked cries of “Shut them down!” from those gathered, he also shared how life advocacy work had reduced the number of abortions in the state from 4,500 in 2015 to 3,800 in 2019, saving 700 lives a year by providing compassionate services to women and offering them life-affirming choices.

Mark Lee Dickson, founder of Sanctuary Cities for the Unborn, received a folk hero’s reception from the crowd. Renowned for his work in Texas, he has helped municipalities across the state pass laws that prohibit abortion. Dickson recounted how in the summer of 2019, the city of Waskom, Texas, not wanting to be the abortion capital of East Texas, became the first city in America to outlaw abortion with an enforceable ordinance. That led the way for Lubbock, the eleventh largest city in Texas, to do the same, despite having a Planned Parenthood operating in the town. The abortion giant sued Lubbock and lost. Dickson reported that today, 50 cities in the United States have banned abortion, and more, as large as Abilene, Texas — population 124,000 — and as small as Paxton, Nebraska — population just over 500 — have abortion-ending propositions on the upcoming November ballot.

Dickson declared, “New Mexico, we are going to fight with you to end abortion here. Abortion will be outlawed in cities across New Mexico.”

Understanding that New Mexico’s Governor Michelle Lujan Grisham has pushed an extreme abortion policy, allowing mothers to end the life of their child for any reason through all nine months of pregnancy, Davis urged the community to help build a “culture of life in the Land of Enchantment.”

“While the abortion industry is pouring millions of dollars into opening more abortion facilities to prey on women from New Mexico, and those coming to New Mexico from other states,” Davis invited those listening to, “Love your families, love your neighbor, and support life-affirming organizations. These three simple things will change our culture, so that every man, woman, and child, born and preborn, are dignified and valued, and abortion ends in Las Cruces.”

New Mexico State University’s Students for Life President Mary Solorza roused the crowd, declaring that she and her peers are committed to making their campus pregnancy and parent friendly.

“We are the post-Roe generation. Women deserve better than abortion!” Solorza proclaimed.

His Mother Chose Life Despite Pressure

The Very Reverend Alejandro Reyes, Rector at the Cathedral of the Immaculate Heart of Mary in the Roman Catholic Diocese of Las Cruces, opened with prayer and his own testimony. Reyes shared how his mother had been pressured to abort by his father, but despite pressures and challenges, she chose life. Today, Reyes said, he serves as, “a voice to the voiceless, the unborn children at risk of abortion.”

Emceed by David Bereit, Founder & Former CEO, 40 Days for Life, the rally was dubbed the New Frontline, and is the first of many coordinated activities aimed at eliminating abortion in New Mexico. Bereit invited those in attendance to connect via NewFrontline.org.

Watch the recorded New Frontline rally at https://fb.watch/enXwN0z6Uc/ and https://www.youtube.com/watch?v=EUAlLDJyAqA.

Southwest Coalition for Life is focused on uniting the pro-life community of El Paso and Southern New Mexico to work together doing more to support women to build a culture of life across the Southwest. This full-time, innovative, and highly focused organization has been called one the most impactful regional efforts in the nation, dedicated to the mission of seeing the entire Southwest region become abortion free — by helping moms be heroes and connecting women to the free, quality, and life-affirming care she needs to choose life. For more information visit southwest.life.