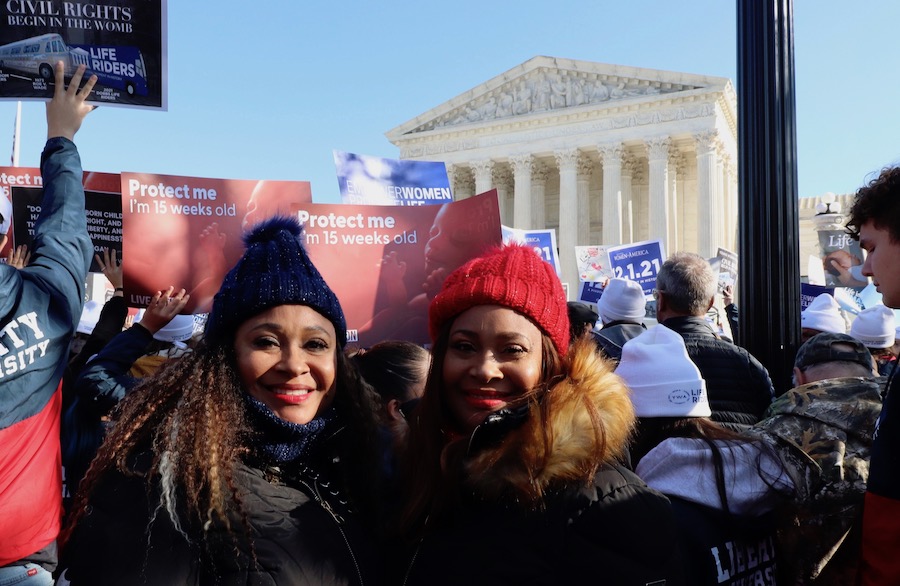 On Dec. 1, Monica Sparks (left), president of Democrats for Life of America, and her twin sister, Jessica Tyson — a Republican public official — were among hundreds of pro-life advocates who gathered outside the U.S. Supreme Court in Washington, D.C.

Jessica Tyson admits their family’s Thanksgiving dinner dialogue about politics and policy was “very interesting.” She serves as state director of Frederick Douglass Foundation, a conservative group. Her twin sister Monica Sparks was recently appointed president of Democrats for Life of America.

They grew up in separate foster homes until they were adopted. Now both are local elected public officials in Michigan. Sparks is a county commissioner affiliated with the Democratic Party. Tyson serves as a city commissioner elected as a Republican.

“We look to fight for life at every chance we get,” said Tyson.

No Illusions About the Democrats

On Tuesday, officials at the Democratic National Committee refused to meet with Sparks. “It took about an hour and a half for someone to come down and allow us to hand them our list of demands,” she says. “We’re hoping we can get them to listen, because life is essential and precious.”

Advocating for quality of life for all, she responds to pro-choice rhetoric the liberal justices used. “Economic empowerment doesn’t mean killing another human being. You’re robbing women of the joy of parenting and robbing a child of a future.”

She is under no illusions about where the power in her party currently lies. Open Secrets reports that Planned Parenthood affiliates spent at least $13.7 million to elect Democratic candidates during the last election cycle.

“It’s always about the money, isn’t it?” said Sparks. “Unfortunately, it’s not about doing what’s right. Where are future voters going to come from if we keep allowing them to be killed and aborted? But the DNC is hyper-focused on money and doesn’t have the foresight to see that.”

In her role as commissioner, Sparks discusses how adequate education and poverty reduction efforts connect to pro-life issues. The Democratic Party leads on those issues, she says.

But she also sees her party’s policies often at odds with those goals. “Our governor in Michigan just cut $16 million from pregnancy resource centers,” said Sparks. “That doesn’t help mothers in need. Those are people they claim to be ‘for’ as Democrats, but they’re not.”

Several people at the rally expressed hope that pro-life advocates can work together despite political differences. “As a conservative myself, it can surely be a little challenging,” said one. “But when it comes to life, we should easily be able to go back and forth across the aisle. Because this is about saving lives of babies, saving women, and changing hearts and minds.”

Dean Nelson, president of the Frederick Douglass Foundation, noted the disconnect between public opinion on life issues and current abortion law set by the Supreme Court. “Our nation is very far left in its policies,” he said. “So our hope is that more Americans will voice their opinions and stand up for true justice.”

Raising voices for life is exactly what happened at the rally outside the Supreme Court, where hundreds gathered on Wednesday.

Pro-life activist Christina Marie Bennett formerly worked at a pregnancy care center in Connecticut. She made her brief speech a call-to-action for conservatives to invest more deeply in at-risk women and children. “With truth, compassion and vigor, we must be courageous in our defense of our youngest brothers and sisters,” she said.

She proceeds to answer the question. “The right wing and the left wing belong to the same bird. We cannot do anything if we don’t do it together.”