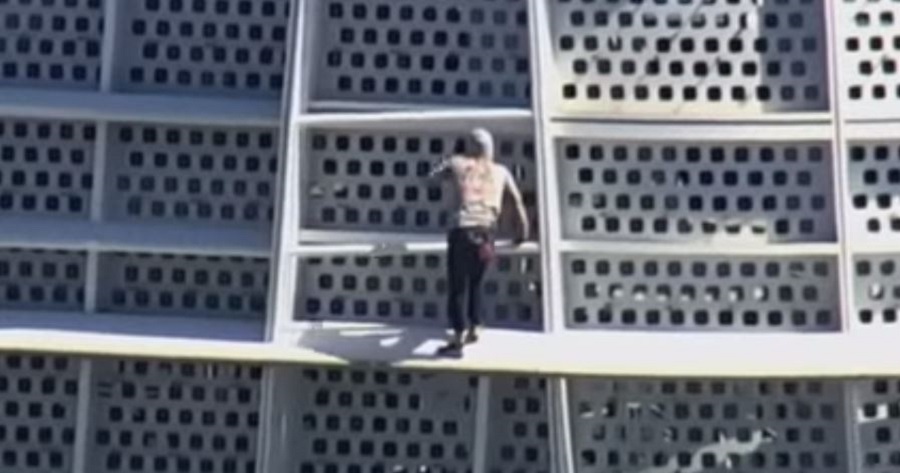 Maison Des Champs, a 22-year-old finance student in Las Vegas, has been scaling skyscrapers to bring attention to the truth about abortion.

When he climbed the Times Square building, he attached a banner that showed a full-term baby who had been killed by abortion. Another banner read, “Abortion kills more than 9/11 every week.”

The sky-high messaging is Maison’s way of being rebellious. “One of the most rebellious or … outlaw things you [can] do right now is be a conservative and be pro-life.”

Especially considering the fierce backlash he’s received for his stance on abortion — from threats of assault to actual death threats.

One man who had threatened Maison stalked and found the 22 year old after he’d climbed the Golden Gate route on El Capitan, a vertical rock formation in Yosemite National Park. Maison told The Stream that the man planned to punch Maison in the face, but held back because Maison’s friends were there. “It was just one of those things. I was like, you know, ‘You can’t intimidate me away from standing up for what I believe in.'”

Maison added, “[I]t really just showed me the importance of standing up for [life] if someone this radical want[s] to come and find me and I guess try to hurt me over a simple belief. … I think that just shows you how much more work needs to be done in our culture.”

He’s doing just that by raising money through his climbs for crisis pregnancy centers and nonprofits that help women care for their baby, help with adoption services, medical services, housing and more. His goal to raise $1,000,000.

So far, Maison has scaled four skyscrapers and raised nearly $9,000. He’s already planning to climb the fifth in a couple of weeks. Based on his experience, he knows he could charged with a crime for some of his climbs. But that doesn’t deter the pro-life activist. “Even if I get charged with something, you know, it’s worth it. It’s … this isn’t like a little deal. It’s a big deal to have a country that’s going out and killing babies in the way ours is.”

Watch Maison climb the Salesforce Tower in San Francisco, Calif.: (Kids, do NOT try this at home. Or near your home. Or away from home.)

For more information, go to prolifespiderman.com