Raising what they call The Moral Outcry, Christian leaders from across the U.S. have brought together more than 250,000 people to decry abortion-on-demand as a “crime against humanity.” 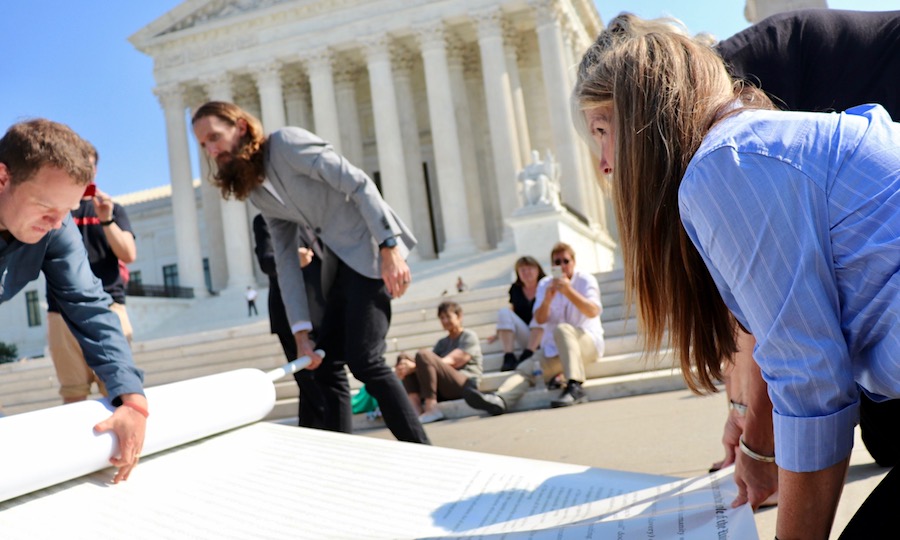 On October 1, 2019, faith leaders including Melinda Thybault of Kansas City, Mo. gathered at the U.S. Supreme Court to deliver a citizens’ petition containing more than 250,000 names. Urging the re-hearing of Roe v. Wade, the petition calls the high court’s abortion policies “a crime against humanity.”

On their first day back in office following summer recess, the nine Supreme Court Justices encountered a surprising scene on the steps of the nation’s highest court.

A group of more than 40 faith leaders, attorneys, and pro-life activists from across the U.S. came together Tuesday to roll out a public petition. Specifically, they called for the U.S. Supreme Court to re-hear its signature abortion-related opinions with new evidence.

“I stand here in the strength of the 46 years of prayers for the overturning of Roe v. Wade and its companions,” said Melinda Thybault, founder of The Moral Outcry. “I stand here on the cries of the over sixty million children that have been murdered in the womb.”

Thybault and her husband Denny journeyed with their children from Kansas City, Missouri to lead the event. The rally reached its climax with the unveiling of a 125-foot printed scroll. It contained the names of more than 250,000 people who have signed The Moral Outcry online petition.

“We join in the moral outcry against this violent act; we want abortion to be made unthinkable in this nation.” — Tina Whittington

“Today, we have a quarter of a million names on our scroll,” said Thybault. “We roll it out before this Supreme Court to say: We do not agree with what you did in ’73.”

The rally occurred as the justices met in conference to discuss which cases to take up in the coming months. Among those potential cases is one concerning a Louisiana state law requiring certain health and safety regulations on abortion facilities.

A current headline on that case reads: “The fight to end Roe v. Wade enters its endgame next week.”

Allan Parker, president of The Justice Foundation based in San Antonio, Texas, serves as legal representation for The Moral Outcry. He was lead counsel for Norma McCorvey, a.k.a. “Jane Roe” in the Roe v. Wade case, before her death in 2017. During her life, she worked tirelessly to see the 1973 case overturned.

“The Supreme Court has committed a crime against humanity by withdrawing legal protection from a class of human beings,” said Parker at the rally.

“That class of human beings is the infant life in the womb. It’s like some of the great crimes against humanity this court has done in the past.”

He cited the case Dred Scott v. Sandford, wherein a black family was denied due process and legally regarded as property. Eight years later, that Supreme Court decision was overturned when the 13th Amendment was ratified.

The high court has reversed its decisions over 140 times.

While the petition strategy is unusual, attorney Parker has noted past precedents for it. If the high court accepts the Louisiana case, his group will file the latest Moral Outcry petition as an amicus curiae brief.

“Most people don’t understand that, in the U.S., abortion is legal through all nine months of pregnancy — for any reason whatsoever,” said Tina Whittington, executive vice president of Students for Life of America (SFLA).

“We stand outside the Supreme Court, which is appropriate,” she added. “Because it’s courts that have given us this horrific reality, resulting in at least sixty million lives lost since abortion became legal.”

The question of where younger generations stand on the life issue was raised often. Whittington cited a January poll of 400 millennial and Generation Z respondents conducted by The Polling Company.

“We found that 51 percent of young people polled opposed Roe,” she said. “And 65 percent support the right to vote on abortion-related policies and want a voice.”

She continued: “We want to see Roe overturned and our country restored to one that respects all life in every circumstance. Our communities should offer the kind of resources that empower mothers and families.”

Her views were echoed by other young women in the crowd. Tiffany Hurt traveled from the Kansas City area with a dozen others to participate in the rally. The Thybaults serve on-staff at the International House of Prayer-Kansas City, where Hurt is involved in prayer and outreach.

“As an intercessor, it’s good to just be the boots on the ground,” said Hurt in an interview. “We’re here to pray for those who have stepped up to fight for life.”

She cited her Christian beliefs as what grounded her views on the issue.

“I believe that no life is by accident,” said Hurt. “Every life is an intentional purpose of God. He’s the only one who gets to decide the whens, the hows, and the wheres.”

Recent analysis has noted the national decline of religious practice among Millennials and younger. Yet team members present from SFLA and Bound4LIFE International reflected a faith-driven pro-life contingent.

“Prayer is basically coming into agreement with the Lord — what he thinks, and feels, and is saying,” said Hurt.

“When there’s agreement on earth with what his will is in heaven, I believe it will shift things. He’s the God of life. We just want life on the earth.”

Fusion of Legal and Religious Advocacy

Clergy members and students were not the only voices who emphasized the importance of prayer. Lawyer Thomas Glessner serves as president of the National Institute of Family and Life Advocates in Fredericksburg, Virginia.

In 2018, his group won a significant Supreme Court case related to free speech issues. The attorney noted his support of how The Moral Outcry links legal and spiritual advocacy.

“The only way we’re going to be successful is through prayer,” said Glessner. “When people say, ‘I don’t know what I can do about abortion,’ I tell them: You can be praying. One of our prayers is for the Lord to reveal to you some positive steps you can take in your personal life as well — whether that be volunteering at a pregnancy center or another step.”

Rally speakers drew connections between the injustices of slavery and abortion-on-demand. Specifically, the scroll of names mirrors how abolitionists presented citizen petitions to the government. Parliament member William Wilberforce ultimately led the cause to abolish the slave trade.

He and others at the rally see the petition as a means to sustain awareness of the issue, which is vital to the public debate according to Tina Whittington.

“The issue of abortion matters to us and we join in the moral outcry against this violent act,” she said. “We want abortion to be made unthinkable in this nation.”

Learn more about The Moral Outcry petition. Explore The Stream’s complete coverage of human life issues, and sign up to receive top stories every week.