Recent US shifts on Mideast policy garnered praise at the Christians United for Israel gathering in Washington, D.C. Yet leaders who spoke, including Israeli Prime Minister Netanyahu, are watching developments in Iran with concern. 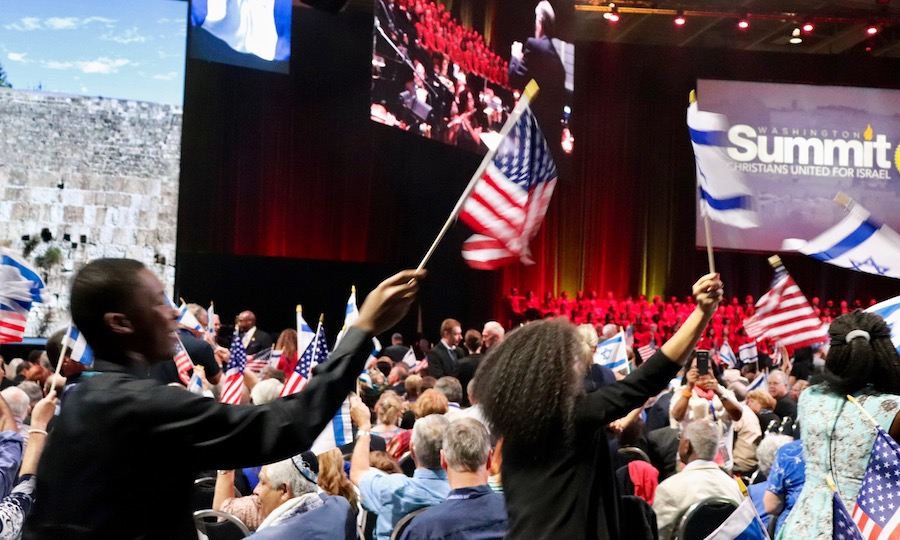 Starting Monday, over 5,000 people from all 50 states came together in Washington, D.C. for the 13th annual Washington Summit of Christians United for Israel (CUFI). The nonprofit group claims 4.3 million members worldwide, which would rank it the largest pro-Israel organization.

“God is with us, therefore nothing is impossible to us,” said Reverend John Hagee to open the conference. “We are spiritual brothers with the Jewish people committed to the Torah.” Hagee and his wife Diana started CUFI in 2006. The couple has long led Cornerstone Church in San Antonio, Texas where over 18,000 Christians worship weekly.

Speakers at the three-day gathering included various public officials, such as Israeli Ambassador to the U.S. Ron Dermer, and conservative media personalities like Laura Ingraham of Fox News. They discussed several threats faced by Jews worldwide, from terrorism to discrimination on college campuses.

When Allies Stand Up for Each Other

Israeli Prime Minister Benjamin Netanyahu addressed the gathering live from Israel. Hagee noted in his introduction that he has known Netanyahu personally since 1985.

“We appreciate the support of Christians around the world,” said Netanyahu, to a standing ovation. He turned quickly to security threats jointly affecting Israel and the U.S. “Let me say clearly: Israel stands in complete solidarity with persecuted Christians in Iran. This is an issue which I believe should concern everyone.”

Rev. Hagee reciprocated in similar terms, calling out hatred against the Jewish people. “Christians United for Israel is at war with anti-Semitism,” he said with the cadence of a Texas preacher. “It’s not a Jewish problem — it’s everybody’s problem.”

He hinted at the long history of Christian anti-Semitism, while explicitly rejecting such attitudes. “Christianity is driven by the law of love, which is the law of God,” Hagee explained. “Anti-Semitism is driven by hatred. The Bible says sweet and bitter water does not flow from the same fountain.”

“Anti-Semitism is sin; and, in the Bible, sin damns the soul.”

The Troubling Rise of Iran

The threat of Iran to Israel — and the U.S. — loomed large over the event. Focus on the rogue regime became more newsworthy when President Donald Trump tweeted about Iran late Sunday night:

To Iranian President Rouhani: NEVER, EVER THREATEN THE UNITED STATES AGAIN OR YOU WILL SUFFER CONSEQUENCES THE LIKES OF WHICH FEW THROUGHOUT HISTORY HAVE EVER SUFFERED BEFORE. WE ARE NO LONGER A COUNTRY THAT WILL STAND FOR YOUR DEMENTED WORDS OF VIOLENCE & DEATH. BE CAUTIOUS!

This came hours after Iranian President Hassan Rouhani spoke Sunday in Tehran. “Do not play with the lion’s tail, because you will regret it eternally,” he said, specifically referring to President Trump. “[You] must understand that war with Iran is the mother of all wars.”

If the U.S. President did not take such veiled threats lightly, neither did Israeli Prime Minister Benjamin Netanyahu. On Monday morning, Netanyahu drew a sharp contrast as he spoke to the CUFI gathering.

“Iran’s regime is a point of darkness in the Middle East, [while] Israel is a point of light,” said Netanyahu. “In Iran, Christians are brutally persecuted. Why are so many people silent as Christians are jailed and tortured in Iran? I will continue to raise the plight of the longsuffering Iranian people — Christians, Bahá’ís, students, journalists.”

“Israel stands in complete solidarity with Christians persecuted by Iran. We in Israel will not be silent. Iran’s regime is a point of darkness in the region, israel is a point of light” #cufi pic.twitter.com/SNlCDVY0dW

While mainstream media has expressed shock at President Trump’s directness, others note focusing on Iran is long overdue. On Monday, National Review commentator Jim Geraghty ticked off a lengthy list of Iran’s recent misdeeds. Police in Iran have gunned down citizens protesting a lack of water. An Iranian judicial official just spoke of letting off the 9/11 hijackers. And terrorists in Iran are still plotting cyber attacks against the U.S.

“Everything that happens is Iran,” stated Elliot Chodoff, introduced at CUFI as one of the foremost Mideast policy experts. “Iran is on the move. Anyone who’s been following Iran for the past 40 years knows this. Their plan is to control the Middle East and rebuild the Persian Empire. They are doing it on the ground, at sea, with ballistic missiles and with a nuclear program.”

Chodoff, who has long served in the Israeli Defense Forces, noted Iran’s growing influence in Lebanon, Syria, Iraq and Yemen. He minced no words in revealing how this Shia-dominated regime seeks to attack the U.S. East Coast.

“The Middle East [is] just the first step,” continued Chodoff. “They want a land bridge between Iran and their ports on the Mediterranean [Sea]. The purpose of those naval bases is to allow their fleet to get out into the Atlantic. They have stated their intention is for their Navy to control to the Caribbean.”

Some audience members gasped, taking in the implication of Iran within striking distance of the U.S.

Citizens Speak Out on Capitol Hill

Most CUFI members are unequivocal in their politics. Reverend Hagee called Mideast policy a “parade of miracles” since President Donald Trump took office. “The unity of CUFI allows us to take action on behalf of Israel at a moment’s notice,” said Hagee. “What we are doing is pleasing in the sight of God.”

“They need assistance when it comes to protecting their borders,” Alexandria Paolozzi told The Stream. She serves as director of Senate outreach for the CUFI Action Fund. “They’re the only democracy in the Middle East and our ally. Strategically and geopolitically, it’s in our best interest.”

Only weeks ago, Senator Rand Paul had proposed an amendment on the bill that would gradually phase out all aid to Israel. It reflected his concerns about costs to U.S. taxpayers. Reverend John Hagee stated the grassroots activism of Christians helped that amendment fail.

Paolozzi elaborated further. “Those 80,000 e-mails were important to show our voice and how strong that is,” she said. “When constituents don’t speak up, it’s very telling.”

However, in an election year, Congress has few legislative days left. “We’re getting down to the wire here with the end of this Congressional term,” she stated. “If we’re going to make it happen, we need to do it quickly.” Thousands of CUFI activists visiting for the Washington Summit had booked meetings with their Senate offices to advocate for the Israel funding bill.

Some elements of this bill are also included in the annual defense appropriations bill, known as the NDAA. “It’s like a failsafe of essential funding, whether or not the [larger] bill passes,” said Paolozzi.

Do Iran’s Leaders Want to Hotwire the Apocalypse?