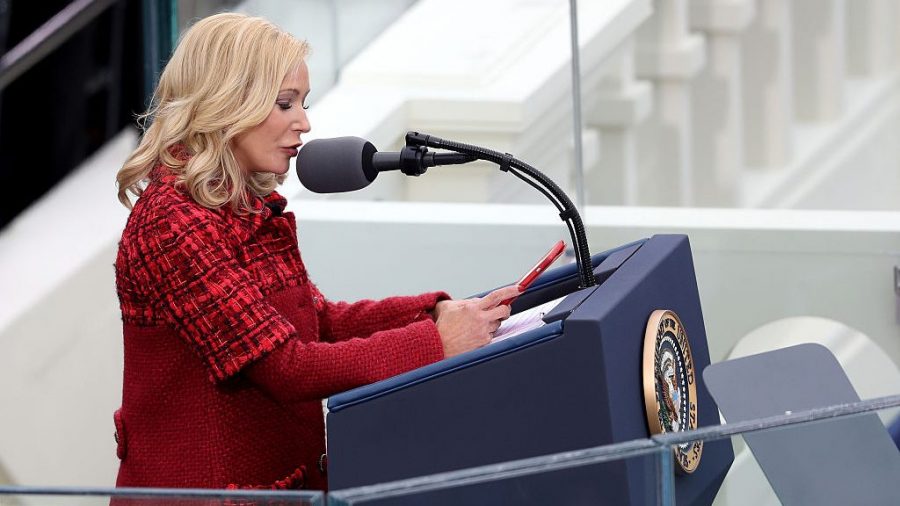 Pastor Paula White-Cain speaks on the West Front of the U.S. Capitol on January 20, 2017 in Washington, DC during President Donald Trump's inauguration ceremony.

NASHVILLE, TN — As the nation watched Hurricane Irma hurtling towards Florida Saturday, another dramatic clash played out at a meeting of the Religion News Association. Paula White, longtime spiritual adviser to President Donald Trump, took questions from reporters in a live panel discussion.

“One hundred percent, our president is a man that has a strong personal faith,” White declared at one point. “I’ve seen him on many occasions in private [be] a person of repentance.”

The controversial televangelist dominated the panel, entitled “The New Revivalists.” Reporters from the Washington Post, Think Progress, and other media outlets asked White repeatedly about her Trump connection.

Yet answers from White, pastor of New Destiny Christian Center in Apopka, Fl., often took them by surprise, helping deflate tensions in the room.

“I wasn’t quite sure what I was getting into today,” admitted White. “But I really didn’t come here to defend myself.” White followed a critique of so-called “apostolic charismatics” by author Holly Pivec, and remarks from itinerant minister and charismatic author James Goll.

White has been a friend and adviser to President Trump for more than 15 years, as Christianity Today detailed before the Inaugural. In 2002, after watching one of her TV programs, Trump reached White on the phone. They have interacted ever since.

She’s currently active in the Faith Initiative, an evangelical board of advisers to President Trump. Perhaps anticipating hostile questions, Paula White stated upfront: “People [often] have their minds made up or set. They want to see things a certain way.”

“As a leader, I’ve learned to lead anyway — to stay focused, to fulfill my God-given purpose,” White continued. “While there will be critics and misunderstanding, ultimately we all answer to God.”

“I Believe That Authority is Raised Up By God”

Responding to a question from Think Progress’ Jack Jenkins on her view that Trump was raised up by God, she said “I believe that for President Obama” as well. And had Hillary Clinton won the 2016 presidential race, White said she would have said the same thing about her.

“I believe that authority is raised up by God. I understand that I don’t understand all things and what his purposes are,” she said. “He’s the sovereign God.”

Both Goll and White answered a question this writer asked. Had they ever offered biblical rebuke to charismatic leaders or their own parishioners?

“We do deal with conflicts and try to bring resolutions,” he said. “Is there accountability? The accountability all differs in its many different applications [by] congregation and how church bylaws are set up.”

“Is there moral conduct that we try to bring people to be aware of and accountable to? Absolutely. But it’s not done in this authoritative, it’s my-way-or-no-way manner,” stressed Goll.

Later, White circled back to the question. “I teach what I [call] redemptive theology and the supremacy of Christ. I am very submitted to my elders, to my board, to spiritual covering. They bring any kind of correction from a biblical standpoint over my local church,” she said.

Goll concluded, “Jesus washed the feet of his disciples. Jesus taught that the greatest among us is the servant of all … We really want to love God and help others love God.”

The panel included criticism of certain charismatic beliefs. Holly Pivec, who critiques those she terms “New Apostolic Reformation” (NAR) leaders on her blog, was asked to state explicit concerns of their involvement in politics.

“Prophets in the movement will endorse specific candidates,” stated Pivec. “A lot of times, it’s more indirect in just their words and how they speak of the leaders, followers get the idea.”

Stream senior contributor Michael Brown stated recently how certain labels are misleading. “All this online hearsay about ‘what the “NAR” is doing,’ the vast majority of it is completely foreign to me and has nothing to do with the men I know,” he said.

The Washington Post reported on another answer from White that shocked those gathered at the upscale Gaylord Opryland Resort:

White is the pastor of a majority African American congregation. “I know this will open up a lot, but our president is not a racist,” she said. White went on to detail her own work on racial bridge-building through her life.

“This is not new for me. But I can tell you right now, as a white person, I don’t think any of us who are white can fully understand what it is to be a black person in America today. What I do know is our nation has such work to do. I believe it has to start with the community of faith.”

Helping During the Hurricane

White addressed Hurricane Irma, then bearing down on Florida. “These past few days have been nothing but working with our community leaders on being a disaster relief center,” said White. “In our local area, we’re in 49 schools right now.”

Great news, there was very little injury and no casualties in Apopka… We did still receive damage at the church. Tornado-like winds ripped through our property, uprooting 45 of our trees in our parking lots… We thank God, knowing it could have so much more devastating!

Emphasizing the church as family echoed her words in Nashville. “We believe that we are the hands and arms of a loving God extended to this world. We try to make a great difference,” she said. “That’s what the church is all about.”

Watch the panel discussion in the Facebook video below.

Why I Pray With President Trump