President Trump Has Looked Into the Abyss 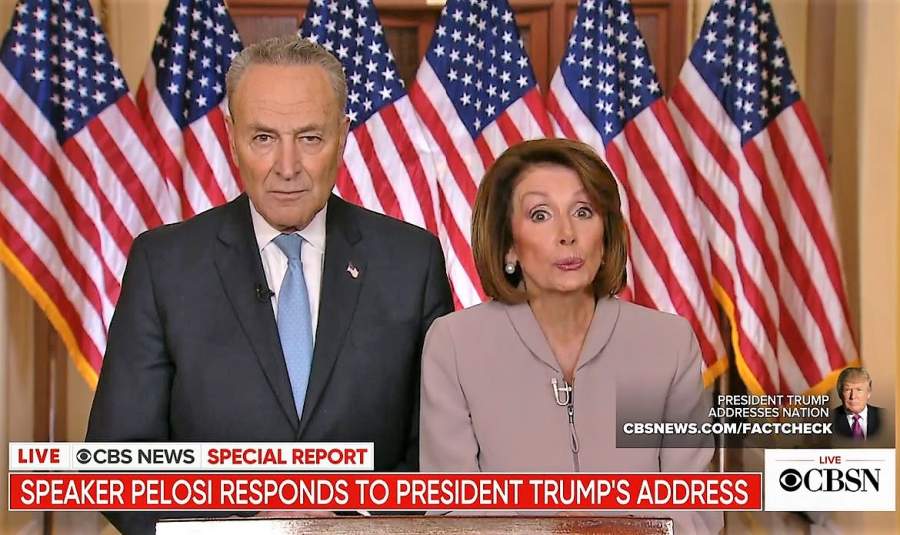 I prepared myself for President Trump’s Oval Office address on immigration as I had for each presidential debate. I had strong drink ready at hand. In case of catastrophe, it could at least numb me to sleep.

There was no disaster. I’m awake and cogent, typing these words, ain’t I?

But I did hit a mighty emotion. One I found hard to characterize, or for once put into words. A feeling crept up on me, and took its time doing its work deep in my gut, until it poked out its nose and stared me down, eye to eye.

It wasn’t my own emotion. That would have been easy. Instead, it was Trump’s which I caught by contagion.

Use the Army to Build the Wall

My own reaction? Mild disappointment. I wanted Trump to go whole hog. To declare a national emergency. To announce that he would build a Wall along the whole length of the U.S. southern border using funds from the Pentagon. And the Army Corps of Engineers. And that he would defy any court ruling, up to and including one from the U.S. Supreme Court, telling him otherwise. That he’d fire any officers who wouldn’t cooperate. That he’d let the House impeach him — which it already promised to do, for trivial, partisan reasons. And count on the Senate to vindicate him, then the voters to reward him in 2020 with a second term and a GOP Congress. As I think in fact they would.

The President looked like a police investigator who’d been sleeplessly interrogating sociopaths.

I hope that the above is his back-up option. It’s certainly better than the other alternative: caving to the Democrats who have renounced our right to have borders. Who want to tell the next Caravan, and the next, that they can drag their children through the desert to our borders, and gain free schooling and Medicaid for the price of showing up.

Such a concession, opening the government without a Wall? It would be tantamount to resigning. The Democrats would give him zero credit for making concessions. Instead they would simply smell the blood in the water from a floundering lame duck. Then continue gnawing on Trump until he shambled out office in the style of Jimmy Carter, not lamented nor even remembered. And of course, the ongoing influx of a million or so low-skill immigrants into a post-industrial economy with a massive welfare state would do the rest. We would never again have a pro-life (or pro-gun rights, pro-religious liberty, fill in the blanks) President. Or Congressional majority. Or Supreme Court justice, of course.

But my own feelings quickly subsided. I started resonating to Trump’s. I was struck by how little joy, fun, or even spunk the President displayed in his address. By the stark, almost gaunt earnestness with which he made his simple, accurate statements, and straightforward arguments. Gone was the bright-eyed dealmaker who’d found common cause with Al Sharpton and Vince McMahon — and so was sure he could find the sweet spot between himself, Pelosi, and Schumer.

When Trump spoke of the Democrats this time, the look on his face was starkly different. He no longer imagined that he was playing high-stakes poker, or even political chicken, with rational, patriotic opponents. Instead, his face was that of a man who had been staring down into the Void.

He seemed, to be quite candid, like a police investigator who’d been sleeplessly interrogating sociopaths, or a POW who’d recently escaped from brutal captors. Or one of those people who foolishly tried to negotiate with Michael Corleone in Godfather II.

My Offer Is Nothing

There was no hint in Trump’s tone or visage that he expects his political enemies to make the slightest concession for the well-being of our country. No, they would keep on betting our ranch for the sake of the country they really care about: The imaginary nation that will someday replace America.

It already lives in their heads. And it marches, or sneaks, or lies its way across the border every day. Each day, each night, we get closer to the day when the left wing of the Democratic party will dominate all public life, from top to bottom. When Christians, conservatives, pro-lifers and others will be treated like psychiatric misfits.

There was no hint in Trump’s tone or visage that he expects his political enemies to make the slightest concession for the well-being of our country. No, they would keep on betting the ranch the sake of the country they really care about: The imaginary nation that will someday replace America.

And sure enough, when the president had finished his somber address, he was promptly replaced on camera by Rep. Nancy Pelosi and Senator Charles Schumer. They stood there like Big Nurse and Doctor Feelgood, explaining in small words and soothing tones how the president was delusional. How his voters had fallen prey to a “manufactured crisis.” How everything would be fine and we’d feel much better if we’d just take the nice pills from the orderlies. Then we could go back to sleep.

I almost wanted Trump to make a break for it, to light out from Washington, D.C. like the Chief at the end of One Flew Over the Cuckoo’s Nest.