A documentary explores how Ronald Reagan and John Paul II covertly worked together. Historians state their alliance was based not on politics, rather a shared view of God’s providence. 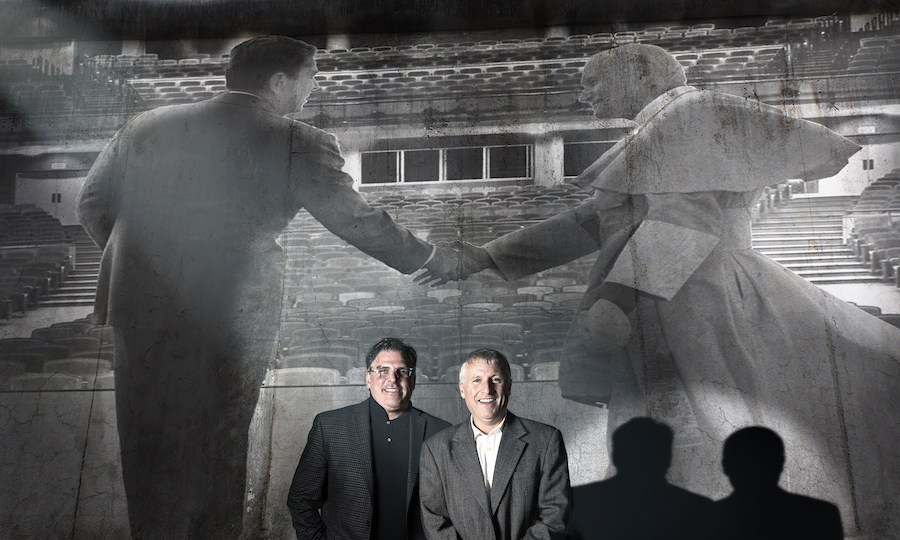 In upcoming documentary The Divine Plan, the friendship of President Ronald Reagan and Pope John Paul II plays a pivotal role in ending the Cold War. Writer-director Robert Orlando (L) partnered with historian and professor Paul Kengor on the film, slated to release later this year.

“In the designs of Providence, there are no mere coincidences.” – Pope John Paul II

Such a statement from the Roman Catholic Pope is hardly news. Yet even many history buffs do not realize President Ronald Reagan held this belief with equal fervor.

Now a feature-length documentary seeks to explore a story uncovered in greater detail due to recent scholarship. Opening in theaters November 6 as a one-night-only event, The Divine Plan chronicles the Pope and the President’s little-known friendship.

“Reagan’s faith was the core of who he was,” says author and professor Paul Kengor, featured in the film. “Yet people in the 1980’s missed this aspect of Reagan and current biographers continue to. It is as if they’re afraid of faith — they won’t even talk about it!”

From the outset, director Robert Orlando determined this depth of knowledge required an original presentation. His previous film Silence Patton is currently available on Amazon Prime Video. He spoke following a recent Washington, D.C. pre-screening of the film.

“We created a cinematic experience driven by graphic-novel imagery,” says Orlando. “Frankly, I want millennials to care, as this is a cautionary tale for them. To get their attention, we arrived at this style by experimenting as artists.

“We didn’t make a film just to teach or inform — we ultimately made it to entertain.”

The Curiously Missing Link in History “Yet few shine a light on faith as part of the fabric of a wider subject matter, even though you need that lens to understand the biography of leaders.

“Paul Kengor and James Rosebush have been the boldest to ask: what spiritual aspects of Ronald Reagan help us understand him?”

Former deputy assistant to President Reagan, Rosebush shows up throughout the film. Having recently authored True Reagan, he relates past conversations from the Oval Office.

“Because of our relationship, the President would profess to me that he was guided by divine providence,” says Rosebush. “What he was trying to achieve was not political victory but a spiritual one.”

“But he did not discuss this, especially not to the media — and it was genius he didn’t,” continues Rosebush. “Had he talked about listening to the voice of conscience, it certainly would have been used as a tool against him.” Valuable in its scope, even that extensive story focused more on politics rather than shared cultural and religious touchstones.

“The Polish pope was truly one of the most versatile geniuses ever,” says Monika Jablonska, author of Wind From Heaven: John Paul II – The Poet Who Became Pope.

“He had intellectual accomplishments in the fields of philosophy, theology, linguistics and literature. Yet he was dedicated above all to defending the dignity of the human person.

“He stepped onto the world stage just as the most powerful country on earth was about to elect a president unwaveringly committed to the cause of freedom.”

The Divine Plan portrays how facing similar trauma set the stage for Reagan and John Paul II to connect.

Most Americans are familiar with the March 1981 assassination attempt of President Reagan. Yet few connect it with a similar incident only months later.

“The most egregious, high-level thing the Soviets ever did was try to kill a Pope,” says historian Kengor. “Soviet leader Yuri Andropov gave the green light to that operation, directing the GRU to assassinate John Paul II.”

“Reagan’s faith was the core of who he was. Yet people in the 1980’s missed this aspect of Reagan and current biographers continue to.” – historian Paul Kengor

Though some dispute the USSR was behind the hit, Kengor has confirmed his narrative with numerous sources. A year later, John Paul II met one-on-one for the first time with President Reagan. In that June 1982 meeting, Reagan’s reputation in the press preceded him.

“It wasn’t a given that John Paul II trusted Reagan right away,” says Orlando.

“He had this stereotype of Reagan as a warmonger, in charge of American military. After that first meeting, the pope went back to Rome and said: ‘I can deal with him, he is a man of peace.’”

That meeting is a lynchpin of Kengor’s award-winning book A Pope and A President.

“They met for about an hour in the Vatican Library,” recounts Kengor.

“They said to one another that they believed God had spared their lives for a special purpose. It was, first and foremost, to try to take down the Soviet atheistic empire.

“It might be a surprise to people, but this absolutely was the way that Reagan thought.”

A Friendship That Ended Oppression

The Soviet Union loomed large as a threat during this era. “The Roman pontiff and American president shared the belief that atheistic communism lived a lie and ultimately it must fail,” says Jablonska. “They agreed to undertake a campaign to destroy the communist empire.”

Both leaders believed the Soviet dictatorship missed basic assumptions about human nature. The film contends that principles of human dignity and democracy anchored their strategy.

“Every political decision Reagan made was informed by his desire to bring freedom,” says former Reagan official Rosebush.

“That drive to free oppressed people around the world was inseparable from his religious beliefs. Because he really desired to allow people to be free enough to worship God.”

The two men connected with audiences using intellect and emotion. Jablonska points to their shared history as actors.

“As men of the theater, they both understood how words and gestures had the potential to change minds and hearts,” she says. “They believed in the power of the spoken Word. Each in their own way used that transcendent power to confront evil.”

“We didn’t make a film just to teach or inform — we ultimately made it to entertain.” – director Robert Orlando

As to the current geopolitical landscape, Professor Kengor keeps his eyes on Russia.

“One of our nation’s chief rivals today — I didn’t say enemy — is Vladimir Putin,” notes Kengor. “Since the year 2000, this former KGB operative has been in charge of Russia. Soviet leader Yuri Andropov was Putin’s boss for years.

“It’s intriguing to consider how this story still has aftereffects.”

“These two great men are no longer with us, but our need for moral clarity and moral leadership remains.”

The director views this fall as an ideal release, with details soon to be announced. He believes The Divine Plan offers an alternative to surface-level reporting that dominates today.

“Contemporary news misses a lot of the facts,” says Robert Orlando. “It doesn’t talk about history in a way that would use it as a warning or cautionary tale. A film like this can penetrate modern audiences more effectively than a professor or a book ever could.”

Despite his boosting of the film over the written page, Orlando worked with Paul Kengor on a book version of The Divine Plan. Set to release June 10, it compiles all the research for the film. Kengor calls this little-known chapter from recent history inspiring and even moving.

“The defeat of Soviet Communism is the great positive story of the past 50 years,” says Kengor. “It’s bigger than any event since the defeat of Hitler in World War II. Ronald Reagan and John Paul II worked together and believed it was part of a divine plan.”

An attorney and mother, Monika Jablonska has seen the effects of communism personally. She asserts that The Divine Plan has broad relevance beyond history and religion.

“Today, Christian values such as freedom of conscience and the traditional family are being threatened,” she says. “These two great men are no longer with us, but our need for moral clarity and moral leadership remains.

“Perhaps this film can help us rediscover the courage, hope and freedom they left as their legacy.”

Recommended for ages 12 and up due to some mature subject matter, The Divine Plan opens in theaters nationwide on November 6 for one night only. Explore The Stream’s complete films coverage, and sign up to receive top stories every week.

Note: This is an edited and updated version of an article that first appeared on The Stream April 24, 2019.