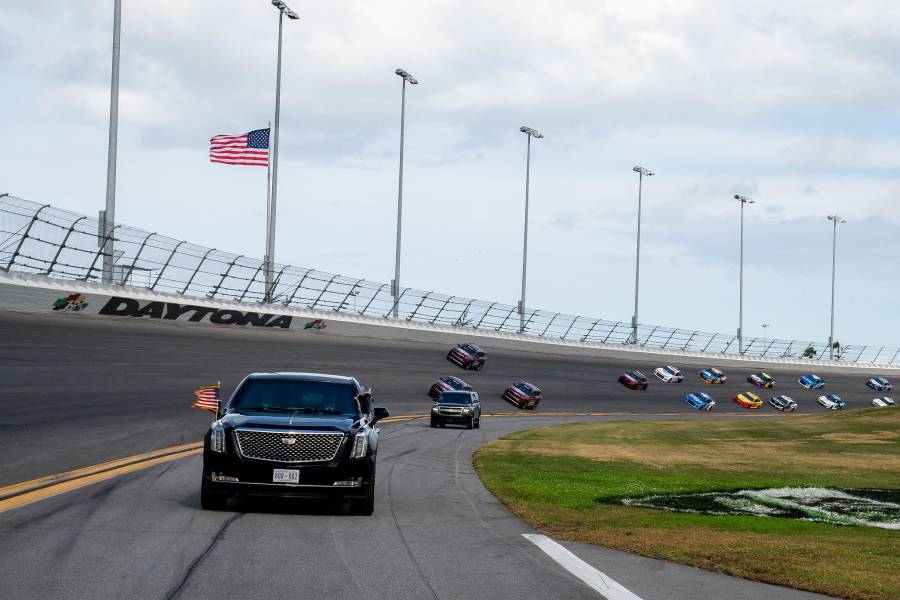 Note: An earlier draft of this was scheduled to run President’s Day evening. We held it up after the crash of Ryan Newman, and have rewritten the ending. We are so grateful that Newman survived that horrific crash and continue to pray for his quick recovery.)

One of the great regrets of the past three years is watching Democrats lose all sense of fun. Sunday being a perfect case in point. President Trump went to the Daytona 500. Actually, he rocked the Daytona 500. Hit Daytona so hard, he knocked the race into Monday. (Actually, it was an unexpected rain storm.)

Trump buzzed the speedway in Air Force One. With his gorgeous bride at his side, he gave the crowd a pep talk. He got to bellow the immortal “Gentlemen, start your engines!” Trump and his 22,000-pound Beast led the field in a spin around the track. He gave one last bit of encouragement to the drivers over their radios as they waited to begin the race.

That’s a bucket list bonanza. Each move awesome. Yet, the grumblers grumbled. Somehow the American president celebrating and taking part in The Great American Race appears as a partisan act. If Americana is partisan, if chants of “USA! USA! USA!” are partisan, who’s got the problem?

At a restaurant. Trump and a motorcade at the Daytona 500 comes on the TV. I literally don’t know whether to laugh or cry or scream or just sigh. All. We’re gonna go with all.

What, having sour pudding with that meal? If simple, good ol’ fashion American fun is seen with confusion and derision, is your problem with Trump or with America?

Trump at Daytona was fun. As it was fun when President William Taft started the tradition of a president throwing out the first pitch of a baseball game. Fun when Taft invented the 7th inning stretch. (Well, not so fun for him. He was very heavy and sitting in the little stadium chairs made him very uncomfortable.)

It was fun when President Obama made it his annual ritual to reveal his March Madness picks. (And it was fun when Obama broke out his Al Green impersonation.)

It used to be fun for champions to visit the White House … until liberals decided to make a political statement out of White House visits and spoiled all the fun.

We used to like the human side of presidents. When Bill Clinton could jog with his pasty white legs and belly for Big Macs. When George W. Bush would spend his vacation racing mountain bikes around his property. When All-American athlete Gerald Ford would ski … and when his bum knee would send him tumbling down stairs. When Ronald Reagan would ride his horse around his ranch, cowboy hat tilted at the perfect movie cowboy angle.

We don’t have kings. We have had men mostly from ordinary backgrounds who rose to the most extraordinary position in human history. The son of an immigrant mother. The son of a foreign student. A man who had issues with booze and drugs. A man who had issues with fidelity. A former Hollywood movie star. A former peanut farmer. A Quaker. A Catholic. A Texan.

A successful general, a failed shoe salesman, a man in a wheelchair.

We’ve seen presidents as tall as 6’4″ and as short as 5’4″. We’ve had a bachelor president and a president married three times. Our 1st president couldn’t have children. Our 10th president had 12. We’ve had a “Silent Cal” and presidents incapable of silence. We’ve had a Tricky Dick and an Honest Abe.

We had a president who happened to also be one of the nation’s top naturalists, agriculturalists, inventors, meteorologists, architects. And when he wasn’t busy helping create the American wine industry … he was writing that “all men are created equal.” Slouch. Jefferson could also play a mean fiddle.

American presidents are us. And who doesn’t want to have fun with us?

Without question, the current president is the most colorful one we’ve had, with the possible exception of Theodore Roosevelt. He’s had the most diverse background of any president since Jefferson. He’s the most famous person to run for president since Ulysses Grant, and all Grant had done was win the Civil War. Somehow Trump turned “You’re fired” into a national catch phrase. And frankly, he’s the funniest president we’ve had, at least since the advent of TV and radio.

John Kennedy had a lightning-fast wit. Ronald Reagan was a sunny storyteller supreme and worked a one-liner as well as Tiger Woods works a green. Bill Clinton could have been a comic actor. Don’t believe me? Check this video done in the weeks before Clinton left office:

Twenty years later, and the site of Clinton lumbering after then Senator-elect Hillary Clinton with a lunch bag still brings a chuckle.

String together his comic monologues and ad-libs and you’ve got a hit HBO comedy special. His riff on lightbulbs and appliances alone would qualify him for The Blue Collar Comedy Tour. His mockery of Lisa Page and Peter Strzok at rallies may be harsh, but if Lewis Black had done it on The Daily Show they would have given him an Emmy. I worked in comedy professionally for 20 years. Hard to think of many who had better comedy timing than Trump. (You want proof? How many times does Trump generate this reaction: “I know I shouldn’t have laughed at that, but … “? That’s what you got from the likes of Sam Kinison.)

And who but someone with a great Irish sense humor and a love of teasing and trolling would have greeted his impeachment acquittal with the retweet of this?

If I could see one thing this year, I think it would be for Americans to lighten up. Don’t listen to Trump with your face in a scowl. Face the day hoping to be tickled not triggered.

It’s going to be a tough prayer to be answered, I know. Last night on Twitter, I saw people reacting to Ryan Newman’s horrific crash at Daytona including nasty shots at Trump.

But I also know that for about two hours, the nation together prayed for Newman. When his car was upside down, crushed and on fire, we were reminded of how quickly life can change. We remembered that life was more precious than political points.

The Daytona 500 began and ended with the same lesson: Living and laughing together, enjoying the fun we can share together, in the brief moment we have together, is the greatest gift we can give our nation. No matter who is president.