Travel from Europe will be banned for 30 days, starting midnight Friday. 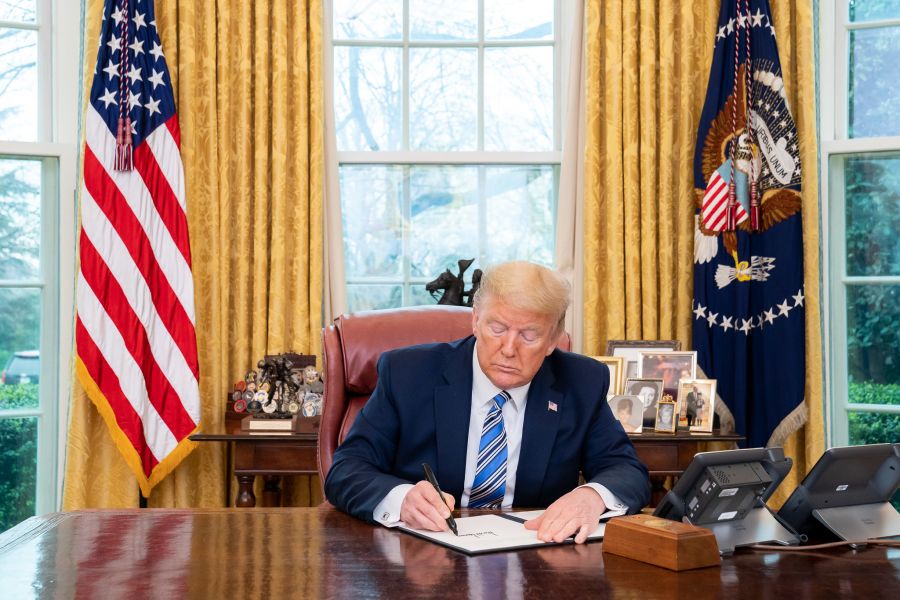 President Donald J. Trump signs a Presidential Memorandum in the Oval Office of the White House, Wednesday, March 11, 2020, for the Secretary of Health and Human Services and the Secretary of Labor on making general use face masks available to our healthcare workers.

“I will never hesitate to take any necessary steps to protect the lives, health and safety of the American people.”

Speaking from the Oval Office Wednesday night, President Trump announced new steps his administration is taking to beat back the coronavirus pandemic.

Most dramatically, “To keep new cases from entering our shores” all travel from Europe to the United States is suspended for the next 30 days, effective midnight Friday. Europe has been experiencing a dramatic increase in coronavirus cases, and as Trump mentioned, many of the case clusters in the U.S. were triggered by those who had returned from Europe. The United Kingdom is exempt from the ban.

The Department of Homeland Security also announced Trump has suspended the entry of “most foreign nationals who have been in certain European countries at any point during the 14 days prior to their scheduled arrival to the United States.”

Trump said his similar ban on flights involving China helped buy the U.S. time to fight the virus. European nations did not follow suit and are now reaping the whirlwind. He also mentioned that restrictions on China and South Korea could ease as the coronavirus cases there diminish.

Other Steps Announced by the President

Instructing the Small Business Admin. to provide economic loans to states and territories affected by the coronavirus. He’s also asking Congress to put up an extra $60 billion to boost the program.

Using his “emergency authority” to instruct the Treasury Department to defer tax payments, without penalty or interest for certain individuals and businesses adversely impacted by the coronavirus.

Has made an agreement with the health insurance industry to waive all co-payments for coronavirus patients.

Will take emergency action to provide financial relief for workers who are ill, quarantined or caring for others due to COVID-19.

Called on local communities to be more aggressive in protecting their citizens.

Mostly Trump used his nine-minute address to assure citizens the nation is going to beat this crisis. He insisted his administration is “responding with great speed and precision.” He said “testing and testing capabilities are expanding rapidly.”

Trump reminded Americans the overall threat to the population remains “very, very, very low.” The greatest threat is still to older Americans, and he advised them to avoid non-essential travel in crowded areas.

Also, this is not a “financial crisis,” said the president. The underlying foundations of the economy are strong. Instead, “this is just a temporary moment of time that we will overcome as a nation and as a world.”

“No nation is more prepared or more resilient than the United States. … We are all in this together.”

President Trump concluded with a call for unity.

We must put politics aside, stop the partisanship, and unify together as one nation and one family. As history has proven time and time again, Americans always rise to the challenge and overcome adversity. Our future remains brighter than anyone could imagine. Acting with compassion and love, we will heal the sick, care for those in need, help our fellow citizens and emerge from this challenge stronger and more unified than ever before.

The NBA announced it was indefinitely suspending its season after a member of the Utah Jazz tested positive for coronavirus. ESPN reports the player is center Rudy Gobert.

Also, Hollywood great Tom Hanks and his wife Rita Wilson announced Wednesday night they have both tested positive. The couple is currently in Australia.

Finally, the White House has announced President Trump has cancelled a planned trip to Colorado and Nevada out of an “abundance of caution.”