The recent Camp Fire in California has devastated entire cities. A pregnancy center director in Paradise shares the heartache — and hand of providence — she has seen firsthand in recent weeks. 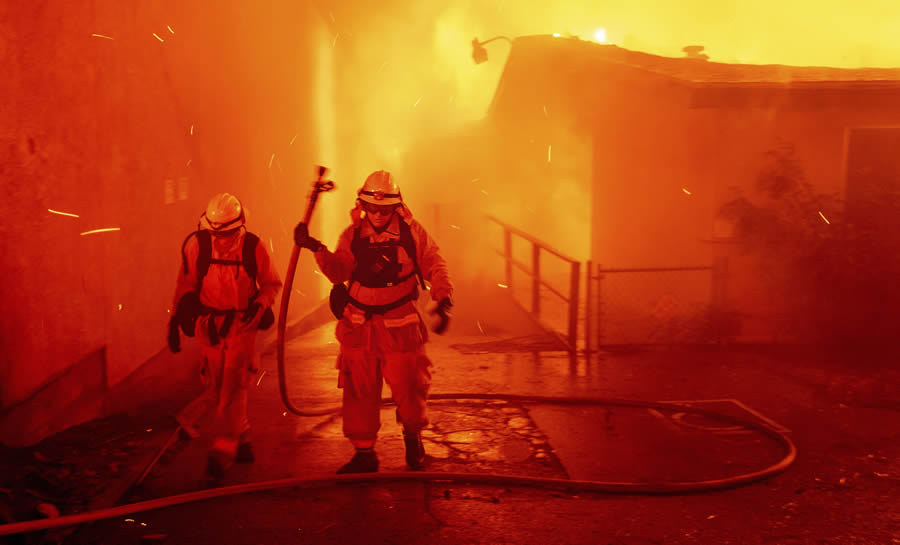 In this Thursday, Nov. 8, 2018 file photo, firefighters battle the Camp Fire as it tears through Paradise, Calif.

In northern California, crews of firefighters and emergency response workers continue to sort through debris left from the devastating Camp Fire.

The raging wildfires which began on November 8 have claimed 85 lives — three times more deadly than the state’s previous worst fire. Nearly 300 people remain unaccounted for, according to the Butte County Sheriff’s Office.

“Ninety to 95 percent of the town has been wiped away,” said Linda Kalanquin of Paradise, California in a phone interview. She has lived in the Sierra Nevada foothills town for over 30 years. “We lost our house, which my husband and I built with our own hands. It was the home our children grew up in, so it’s difficult.” Kalanquin has served as director of CareNet of Paradise since the pregnancy help center opened in 1993. “Believe it or not, our clinic is still standing — praise God!” she said. “The problem is, there won’t be clients or patients for probably two to four years [in that location]. There are just a lot of unknowns.”

The pregnancy center has served 300 expectant mothers annually, according to the director. Only in the past two years has the center acquired the equipment and training to offer free ultrasounds. One of 2,752 such centers nationwide, CareNet of Paradise also provides counseling, baby clothes, diapers and other services without charge.

Though their clinic stands, the timing of the fire was particularly difficult. “Thursday, November 8 was our annual fundraising banquet,” said Kalanquin. “We normally raise 70 to 75 percent of our annual budget at that banquet. Obviously, that didn’t happen.”

Christian speaker and author Joel Richardson praises the work of such centers. “Pregnancy centers are a powerful and beautiful form of mission,” he stated via e-mail. “Mothers and their babies are people, and missions are about people who need Jesus. They [reveal] opportunities for redemption in the midst of tragedy.”

“We have six part-time staff members, the majority of whom lost their homes. I need prayer for guidance and wisdom, and the ability to comfort them in my pain.” – Linda Kalanquin

With members now scattered across California, the local CareNet board of directors has not yet met to discuss their future. Kalanquin’s immediate focus has been caring for her team. “We have six part-time staff members, the majority of whom lost their homes,” she said. “When we met last week, I fed them well and we all told our stories.”

“I need prayer for guidance and wisdom, and the ability to comfort them in my pain.”

Where Is God During Crisis?

Richardson, co-author of The Mystery of Catastrophe which released last week, addresses questions people often ask in such crises.

“The sovereignty of God is an undeniable reality,” he told The Stream. “Yet tragedies happen, [like] this present nightmare in California. We must be honest and say that the sovereign God allows tragedies like this to happen. Trying to understand why, however, is beyond our human ability.”

Wildfires destroyed over 13,900 homes and other structures, an estimated $7 billion in damages. On Thanksgiving, hundreds of Californians camped out at a Walmart parking lot in nearby Chico. Local churches and relief organizations provided meals for those in need.

Kalanquin also evacuated to Chico and was able to secure a rental home. She said they celebrated Thanksgiving “with four generations under one roof — like the Waltons.” Two of her children had just bought “fixer-upper” homes in Paradise, which were also lost.

“Rather than trying to figure out why things like this happen, our job as the people of God is to ask the right questions,” said Richardson. “What needs can I personally meet? How can I further the cause of Christ? What ministries are doing good that I can support, pray for and donate to? If we start there, then we become servants of God rather than his accusers.”

Despite widespread devastation, Kalanquin sees the hand of providence at work.

Though their annual banquet was cancelled, the planned food did not go to waste. For years, a local renowned chef has donated his time and staff for the banquet. Linda Kalanquin noted they normally go for low-cost fare, but this year was special.

“We decided for our 25th anniversary, we were going to do it big and serve our banqueters prime rib,” she said. “We had bought the prime rib, which was stored in refrigerators at the church.” In the midst of over 50,000 people in Butte County being evacuated, saving food was the least of their concerns.

Paradise Alliance Church, where Kalanquin and her family are members, has long hosted the annual banquet. It was designated by the town of Paradise as one of two “shelter in place” assembly points. Local media has praised their rapid-response relief efforts. The church is part of the Christian and Missionary Alliance, a Protestant denomination founded in 1887.

Attending Sunday services at their sister church in nearby Chico, Kalanquin smelled something familiar. “After church, I went out and literally followed my nose,” she said. “You know how good prime rib smells? I used it to find the kitchen.”

Kalanquin walked past dozens of evacuees holding plates and exclaiming between bites. Prime rib? Who serves prime rib at a shelter? Have you guys tasted this? They’re giving out seconds!

“We all need hope to survive. That’s the human condition. We have the only hope, and it’s not a hope that is going to be dashed by a fire.” – Linda Kalanquin

“I found the people who were cooking,” she said. “We spoke and I found out it really was our prime rib! Somebody had the wherewithal to figure out a way to get all that prime rib down to the shelter.”

The pregnancy center director saw the scene as a providential sign. “God used our wonderful prime rib to bless all these evacuees,” said Kalanquin. “That’s how God works. It’s abundance and overabundance — it’s running over!”

Faithful Service and the Big Picture A committed Christian, Linda Kalanquin reveals that eternal matters have come up lately with friends and family. “We all need hope to survive,” she said. “That’s the human condition. We have the only hope, and it’s not a hope that is going to be dashed by a fire.”

Her pastor echoed these words in a recent interview. Drawing on Scripture, Richardson also concurred… and mentioned what he sees as a larger narrative at play in present times.

“The Lord frequently uses crisis to shake us and move us to reach out to him,” he stated. “No one prays and cries out to God more than those in crisis. The Bible says that the closer we get to the return of Jesus, natural and man-made disasters — like birth-pains — will increase in both frequency and intensity.”

Kalanquin remains busy, fielding return calls from insurance companies and assisting her scattered staff. She has also connected with the pregnancy center in nearby Chico, as they evaluate a partnership moving forward.

“The Lord frequently uses crisis to shake us and move us to reach out to him. No one prays and cries out to God more than those in crisis.” – Joel Richardson

“We’re rebuilding the community,” she said. “Our CareNet clinic could use pretty much anything. Prayers are huge. Finances are huge. I have no place to put diapers, so please don’t send diapers! Eventually, we’ll ask for diapers again. Paradise Alliance Church has also set up a relief fund.”

Often traveling to the perilous Middle East region, Richardson urges believers not to allow the dominant consumer culture to obscure a higher vision. “Today, a new mission field has opened up called crisis,” he stated. “It requires a new kind of flexible missionary. Christians must awaken to this reality and make the most of what is in front of us.”

“These crises are opportunities to lean more fully on God, the only source of life.”

Explore The Stream’s complete coverage of the Camp Fire crisis. Sign up to receive top stories every week.

Mark Batterson on Double Blessing: ‘What We Give Away, We Get to Keep Forever’