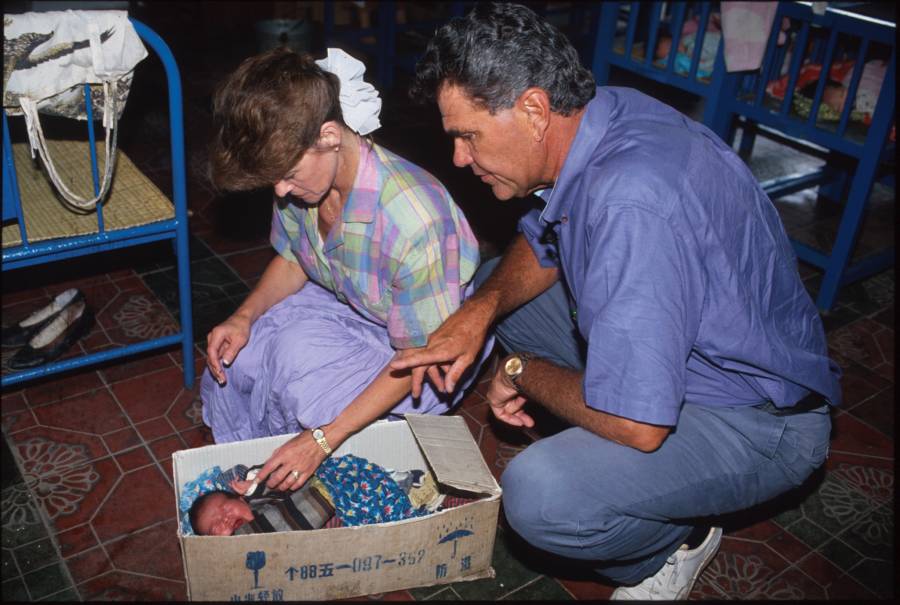 James and Betty Robison with an abandoned baby rescued in China in 1994.

Millions of born-again Christians in China are in love with Jesus — and are perhaps as strong in the faith as any who have ever lived. They have been driven underground. China’s deceived government leaders have changed God’s truth into a lie; they are not trustworthy. Their cover-up about the origins and extent of COVID-19 outbreak are hardly unique.

My Experience With China’s Orphanages

Betty and I began going to China in 1994. We went to see if we could find a way to help their children, especially those in orphanages, because families were only allowed one child. Little girls were often aborted or left on sidewalks in cardboard boxes. The parents of those abandoned children were hoping someone would pick up the babies and take them home.

Most of those baby girls ended up in orphanages. It was heart-breaking to visit these facilities, but we knew their parents chose life and wanted the best for them. (A few of my staff members have even adopted girls from China.)

In many of the southern provinces away from Beijing, we were able to meet with mayors, governors and city leaders to discuss the love we had for those precious children. We asked how we could improve the living conditions.

In the city of Jiujiang, Jiangxi, we were allowed to help build one orphanage that I dedicated. I was able to share with Communist leaders my testimony of my being the product of rape. I told them my 40-year-old mother wanted an abortion, but amazingly, the doctor refused to do it. I shared how I grew up without a stable home and met Christ as a teenager, and my life was transformed. I told them how I met Betty, and talked about my family, children and grandchildren. I explained that we love helping people and wanted to help their precious orphaned children.

Our interpreter would tell us time after time that he would hear those Communist leaders talking in the hall, and they said, “These people from America are not deal-makers. They aren’t here to multiply their financial resources, they are here to love our children and help us deal with our challenges.” They were inspired by it. We made it clear this was because of our relationship with God.

I was told that I could speak in many of the provinces, and the leaders knew we would have a million people or more a night. They said I could give my story — but I just couldn’t give an invitation for them to make a public decision. We found that amazing because I could talk about Jesus.

Before I got a chance to speak, however, an awful thing occurred. Some foreign newspaper journalists began writing stories exaggerating what was going on in the orphanages, and it made the leaders angry. So they drove the media out and stopped allowing us to continue working in the orphanages.

We had been placing Christian doctors and nurses in those facilities — we didn’t tell them they were Christians, but these healthcare workers just went out of love. When the government clamped down, it really did hurt. They came down hard on the Christian church and drove it very seriously underground.

Such are the ways of the deceived and authoritarian.

Deceived people want power. Under the guise of caring for others, they live determined to control others — making them dependent while using them for their selfish, self-fulfilling, deadly purposes. Lives are expendable and must be destroyed or overpowered so they can continue to gain control. They do not win the argument or debate — they destroy or nullify the effects of those who disagree, however meaningful or helpful those ideas may be.

The Marxist, Communist, Socialist ideology is an idea, and ideas do have consequences. Communism killed 94 million people in the 20th century and has not stopped. What greater evidence do you need that communism (and its cousins) is a very bad idea?

The right ideas are based on truth and transform minds and lives, individuals, families, communities, cities, counties, states and, yes, nations. This is God’s kingdom impact. (Keep in mind, it is His truth delivered in unconditional, redemptive love, and it is only love that never fails. It doesn’t work on our schedule or time table, but it works “all things together for good to those who love God” and understand we are created for our Father’s kingdom purpose.)

Chinese leaders recognize that the free market works, but they don’t understand it is freedom that makes it work and can set China free, enabling them to bless the world beyond imagination.

I believe that if the self-seeking, godless, Communist leaders would allow the churches to come out openly for all to behold the power of love, compassion, courage and positive actions, they would be able to set the nation free from the bondage of deception, evil, destruction of meaningful life and productivity.

If the church in China is one day allowed to stand like the shining city set on a hill, I believe a billion people could experience the transforming, powerful effect of the gospel of the kingdom. Yet, because they are threatened by the good news, China’s government imprisons and even kills those who take a stand for Christ.

Praying for Our Enemies

You ask, “How should we pray for obvious enemies like China?”

One way we pray for China is to pray for the continued resurrection of the underground church. At the end of Cultural Revolution in the 1960s, these house churches quietly began to spring up in rural areas and spread to the cities. According to Open Doors USA, there are an estimated 97.2 million Christ-followers in China, and some experts believe that by 2030, there will be more Christians in China than in any other nation.

As the church numbers show, the Chinese people are hungry. They are among the brightest, hard-working, truly caring people on the planet. They respond to real love and truth, to the effectiveness of hard, focused work. They assume responsibility. Nothing seems impossible to them. Many are casting aside the lies of Satan and helping get the arms of a loving God around their nation.

My prayer is that every Christian in America and around the world will pray for all who have believed the father of lies and chosen to live in bondage and keep others in bondage by denying the truth that sets us free. Pray they will turn from the deception, defeat and destruction the father of lies perpetuates on humanity.

Let’s ask God to move on the Chinese government to let the church stand up. How freeing it would be for them to make visible the invisible Jesus in their lives and to see a great awakening there. Pray to that end. It would reveal what real love looks like, and I believe it would change the whole country and touch the world.

America was birthed as an answer to prayer. Many of our freedoms were a result of fervent prayers of righteous people. May our prayers prove to be a midwife to a birth of freedom across China. May our enemies come to their senses and give this true freedom a chance.