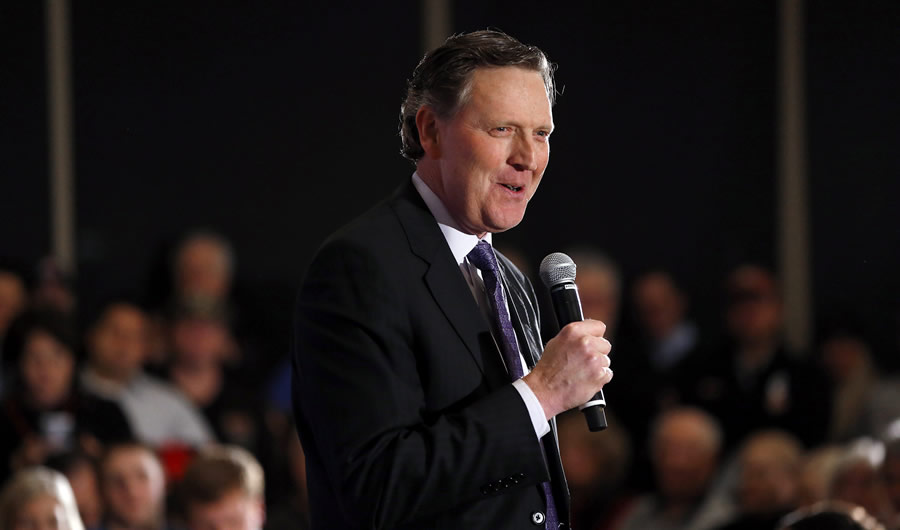 Words matter when one leads the free world. It’s a lesson the White House has illustrated in recent weeks with issues involving an errant communications director and its initial response to the tragic events in Charlottesville, Virginia.

President Trump corrected both issues. The following Monday, he delivered a bold, specific speech against racism. Weeks prior, his chief of staff fired Anthony Scaramucci. The urging of many voices played a role. One such voice who publicly called out both issues is Bob Vander Plaats, president of The Family Leader, based in Urbandale, Iowa.

Vander Plaats has been mixing it up since the Iowa primaries, with then-candidate Donald Trump; he was even on the receiving end of online name-calling. The two made amends after Trump became the party nominee for president. Last month, counselor to the president Kellyanne Conway spoke at a Family Leader summit.

Having some access to the halls of power hasn’t stopped Vander Plaats from calling the White House to a high standard. He urged the president on Saturday to “clearly condemn domestic terrorism” before remarks were expanded. And hours after Scaramucci’s coarse interview, Vander Plaats wrote an open letter calling for his ouster, picked up by the Washington Post and CNN. Within two days, Scaramucci was out and General Kelly established new policies of decorum within the White House.

To what degree Vander Plaats affected either decision is unknown, yet clearly confronting the status quo got results. Parenting four sons alongside his wife Darla, Vander Plaats spoke in an interview from his Iowa office about his public stand, battles on Twitter — and why he fights for conservative principles.

Why did you decide to speak out publicly and call for the firing of Anthony Scaramucci?

Bob Vander Plaats: First of all, because it was the right thing to do. It allowed me to be consistent with my promise to President Trump — that I would be a real friend to him. A friend cheers him on when he needs to be cheered on, and holds him to account when he needs to be held to account.

When I saw Scaramucci go after the chief of staff and the senior advisor regularly, I thought, There’s no way this can exist in any culture, much less the White House. Then the verbiage that he used, the profanity, shouldn’t be allowed anywhere.

That’s what motivated me quickly to decide: I’m going to speak out that Scaramucci needs to be removed, to be fired. You can’t allow that to exist inside the White House and to be reflective of the spirit of the White House.

The media soon saw your statement. A Des Moines Register reporter said you had ‘sold out your values’ to President Trump. He seemed confused about the hashtag #TrueFriend which you used.

Vander Plaats: You’d expect someone from the Des Moines Register to be confused by that. A lot of media outlets believe you’re just going to be loyal to the Republican brand or the Republican president — instead of saying, No, I’m loyal at a higher level than that.

My loyalty is to God and the clear values and virtues that are expressed in the Scriptures. If I’m going to be a true friend to President Donald Trump, or to Josh Shepherd, or to I believe the reporter’s name was Daniel Finney, I’m going to let him know when he does right and when he does wrong.

That’s part of being the prophet Nathan to King David, or the prophetic voice to a culture. The Word of God speaks to current issues.

Back in early 2016, you clashed with then-candidate Donald Trump who was campaigning in Iowa. How can leaders effectively navigate speaking truth to public officials while keeping lines of communication open with them?

Vander Plaats: It’s all in the approach. Christian leaders have a responsibility and a duty to speak truth even when it’s uncomfortable. They have to make sure that the desire for the pursuit of God’s Kingdom and His righteousness always outweighs a coveted seat at the table.

The first thing is, you have to check your heart. Is your heart right in calling this out? Two, speaking truth does not mean you have to demean the person or attack a person’s core or character. You have to keep the issues at the center. With President Trump, I’ve always tried to be very deliberate — I’m not saying stuff about his hair or the way he acts, that isn’t it.

When I speak up is when the issue is outside the lines. Case in point: the words and actions of Anthony Scaramucci were outside the lines. It wasn’t me saying what a bad leader President Donald Trump is or what type of person he is, it was clear: This verbiage and treatment of other team members has no place in the White House.

If the approach is right, I think President Trump will listen and he won’t discard or discount you as someone who just wants to be in a tit-for-tat conflict.

President Trump firing Scaramucci came only a couple weeks after The Family Leader hosted Kellyanne Conway as part of your annual summit. What insights did you take away from her time with your group?

Kellyanne is very loyal to the President. I really believe she is someone who will challenge him privately and affirm him publicly. I’m glad she is in that position. It gives me greater comfort that President Trump has surrounded himself with people like Kellyanne Conway and now like General Kelly.

Since he’s been in office, are there certain actions of the Trump Administration you point to as their biggest accomplishments?

Vander Plaats: Their biggest accomplishment is why many people of faith voted for President Trump. We saw Justice Neil Gorsuch confirmed to the Supreme Court. He delivered on nominating a constitutional justice, which was the biggest issue at hand. I’m thrilled with the Gorsuch appointment because we’re seeing in Gorsuch’s opinions that he is what was promised.

Obviously, President Trump has delivered a lot of optimism on the economy though not a lot of policy yet. He has directed a lot of his department heads to get rid of a lot of unnecessary regulations. These prevent businesses from doing business. Injecting optimism into the economy is a part of a president being a leader. Then the stock market rises and new jobs are created, and we’re seeing that.

Those are two of the biggest things. His Cabinet as well is solid. And let me just state: Jeff Sessions is the right person to be the Attorney General.

With the media airing new accusations against the White House every day, and Congress investigating Russian interference in elections, discerning the “real news” can be difficult. What actual concerns are you watching for with this administration?

Vander Plaats: There are concerns, but I’ve responded many times to this in interviews on CNN. Not to discount these investigations, but the House, the Senate and Special Counsel Robert Mueller all have their own investigations regarding Russia. Let’s let them do their job. If there’s something there, let’s address it then.

In the meantime, let’s focus on North Korea, the opioid crisis, job growth and the economy. There are a lot of things we can be focused on that can really benefit and strengthen the country. We need to stay focused, which is my encouragement not only to the media but also to President Trump.

I encourage President Trump to tweet often, as long as it’s focused on driving his message and narrative. I’d tell him not to tweet if it’s off-the-cuff and outlandish, taking everyone off-message.

State legislatures across America have passed a wave of abortion restrictions into law this past session, including in Iowa. Why is this issue such a driving force for you?

Vander Plaats: It’s a driving force for me because of our family’s personal story. My boy Lucas wasn’t supposed to live for two weeks, yet today he is 24 years old and still has a dynamic impact on those who encounter the gift of Lucas.

Even for a child born with significant disabilities, I believe all your days are planned and ordained. At The Family Leader, we say: God designed it, science confirms it and nature always reveals it. Science and God’s order are actually aligned and in sync. You’re seeing that with the abortion debate.

This last session, our legislative team led by Chuck Hurley wanted a ‘life at conception’ law passed in Iowa. Ultimately, it could challenge Roe v. Wade because the courts are changing. Because even in the Roe argument, it said essentially, If you can determine that the unborn child is a person, the opinion of the court changes.

So we wanted a ‘life at conception’ bill. Instead, we got a bill that bans most abortions after a baby’s 20th week of development in the womb. It also has a 72-hour waiting period and an ultrasound provision in it.

When you start to pass pro-life legislation, people will lash out against these policies as we see with this court battle. Our goal is to keep presenting very rational arguments for life. We need to embrace that every life begins at conception, and it should be fulfilled until natural death.

Thinking big-picture, do you worry about the current direction of the conservative movement?

Vander Plaats: I do have concerns. What does it mean to be conservative? We want to adhere to conservative principles and champion those values.

Folks in Iowa tell me sometimes, “It’s sure better than Hillary Clinton.” I remind them: comparing a decision to Hillary Clinton is a bar of the lowest common denominator. We beat Hillary Clinton. We’re glad she’s not in the White House. I fully recognize, understand and applaud that.

Now we have to lead and champion conservative principles and values that will make our families stronger, make this country stronger and will be a benefit for generations to come.

A freelance writer and editor, Josh M. Shepherd has served on staff at The Heritage Foundation, Focus on the Family, Bound4LIFE International and two Congressional offices. His articles have appeared in media outlets including The Federalist, The Daily Signal, Boundless, The Stream and Christian Headlines, where he serves as a contributor. He earned a degree in Business Marketing from the University of Colorado. Josh and his wife live in the Washington, D.C., area.

Fluke or Fruit? What Our Actions Say About Our Hearts

How to Resist the Vulgar Society