13 Powerful, Eye-Opening Pro-Life Signs from the March for Life

Assembling from across the nation, an estimated 100,000 people showed up Friday for the world’s largest ongoing human rights demonstration. 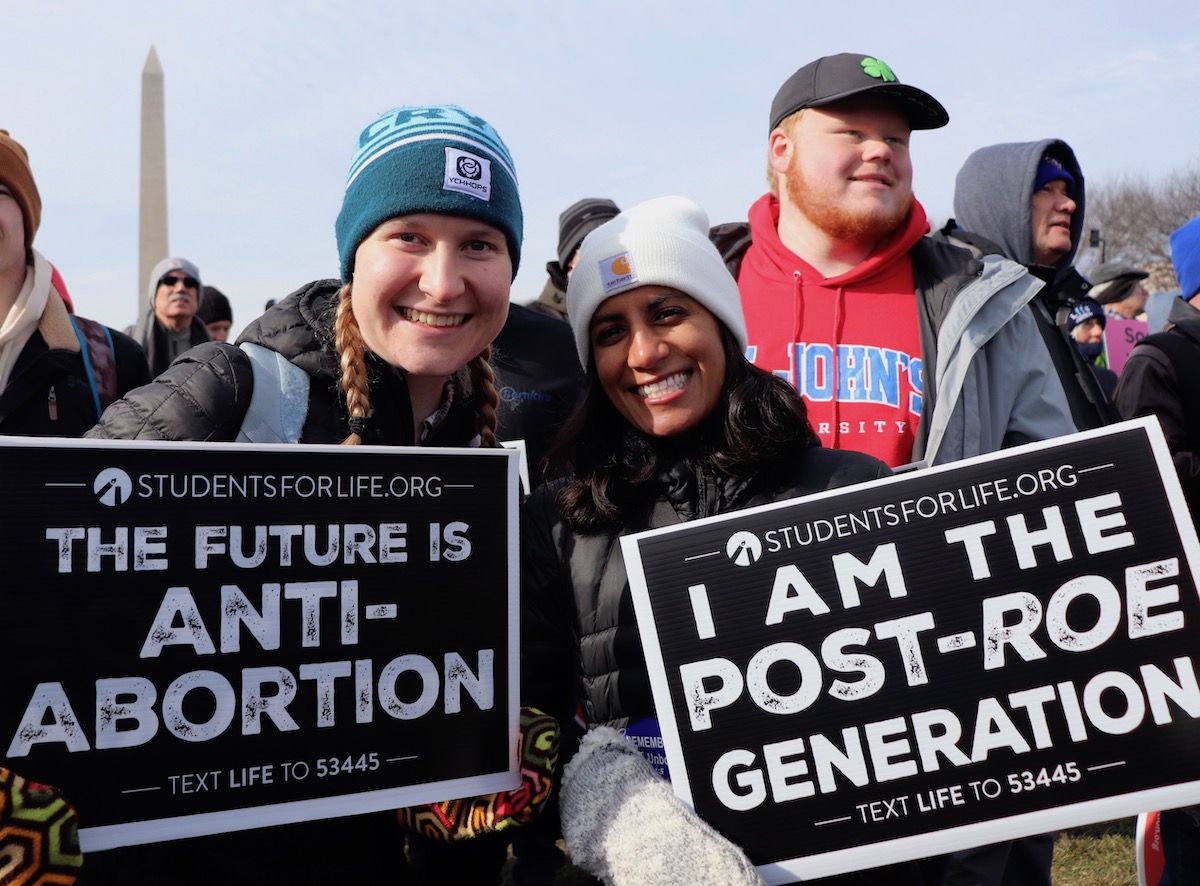 On Friday, an estimated 100,000 people gathered for the 49th annual March for Life held on the National Mall in Washington, D.C.

“We are hoping and praying that this year, 2022, will bring a historic change for life!” said Jeanne Mancini, president of the March for Life.

This weekend marks the somber anniversary of the Roe v. Wade court decision, which legalized abortion in the U.S. at any point in pregnancy. Yet at the 49th annual observance, the tone was decidedly upbeat.

Due to a current Supreme Court case, Dobbs v. Jackson Women’s Health, many pro-life advocates see change on the horizon.

Marjorie Dannenfelser, president of Susan B. Anthony List, cited stats that most Americans want restrictions on abortion. “Almost 50 years ago, the court took away our ability to grapple with this deeply moral issue,” she said. “The high court only created more tension and friction, because it completely outflanked public opinion.”

That tension was on-display Friday. An estimated 100,000 people gathered on the National Mall to make their voices heard in support of lives in the womb. 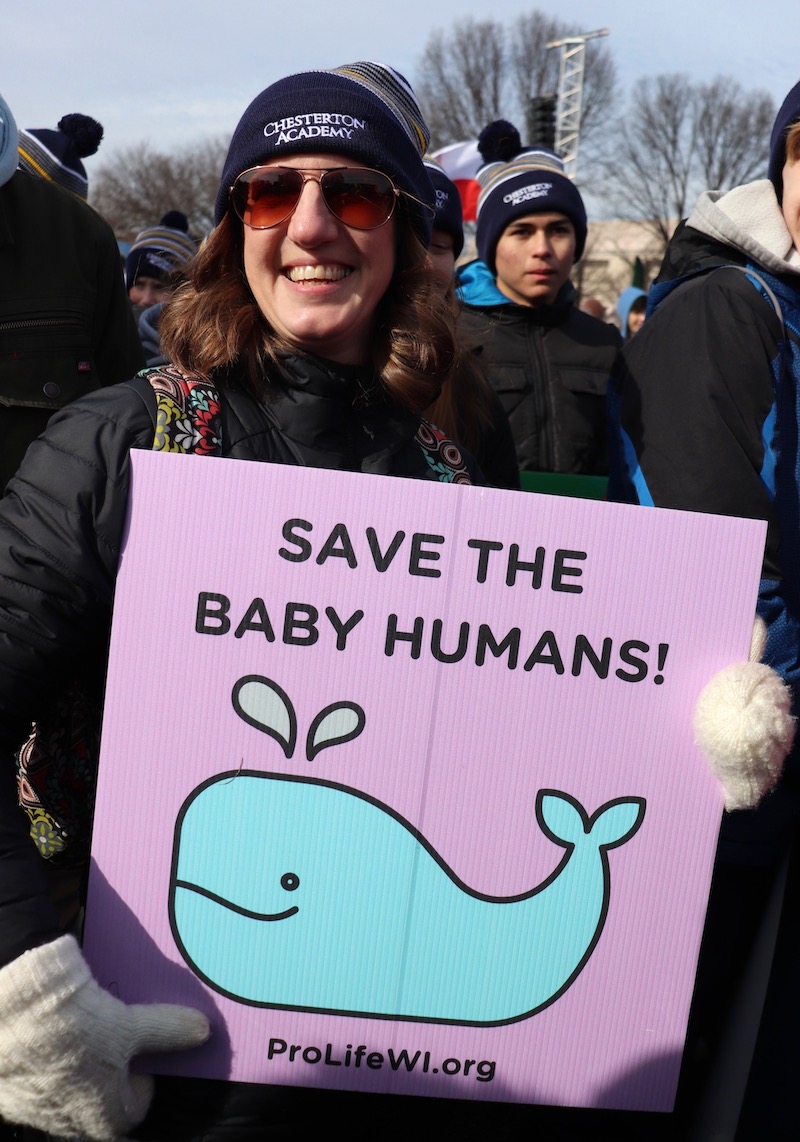 About a quarter of attendees carried signs — some pre-printed, and others handmade.

They provide a window into the geographical and message diversity of the march.

Families came together to march and be inspired with the message of life. 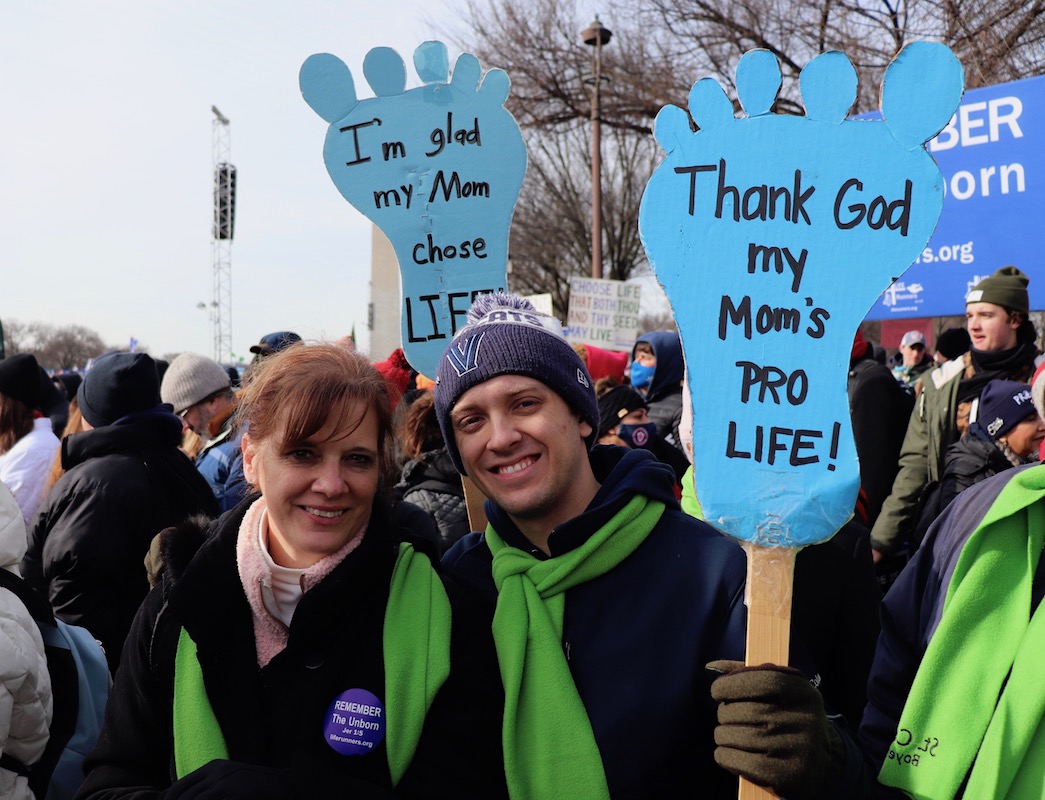 College friends Erin and Emma came with a group of 25 students from St. John’s University in New York, NY.  “Life is important at all stages,” said Erin.

Emma added: “It’s great to come out and see everybody stand for the cause of the unborn.”

While few signs explicitly commented on politics, a few reflected the contradictions of President Joe Biden.

A practicing Catholic, President Biden has nonetheless rejected the church’s moral teachings on the right to life of the unborn. 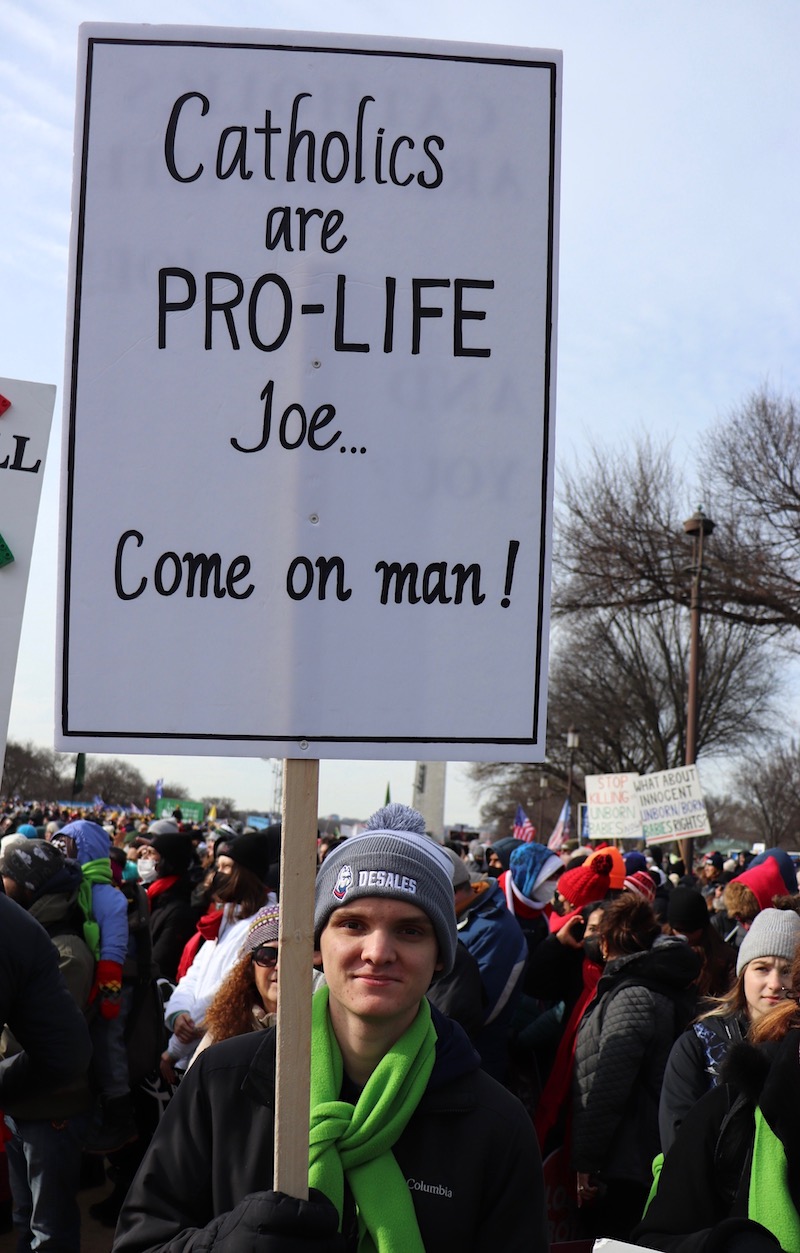 Affirming the Value of Life

Most signs simply affirmed the value of every life. Elizabeth, a woman from Delaware, shared a message of joy and celebration of her newborn. 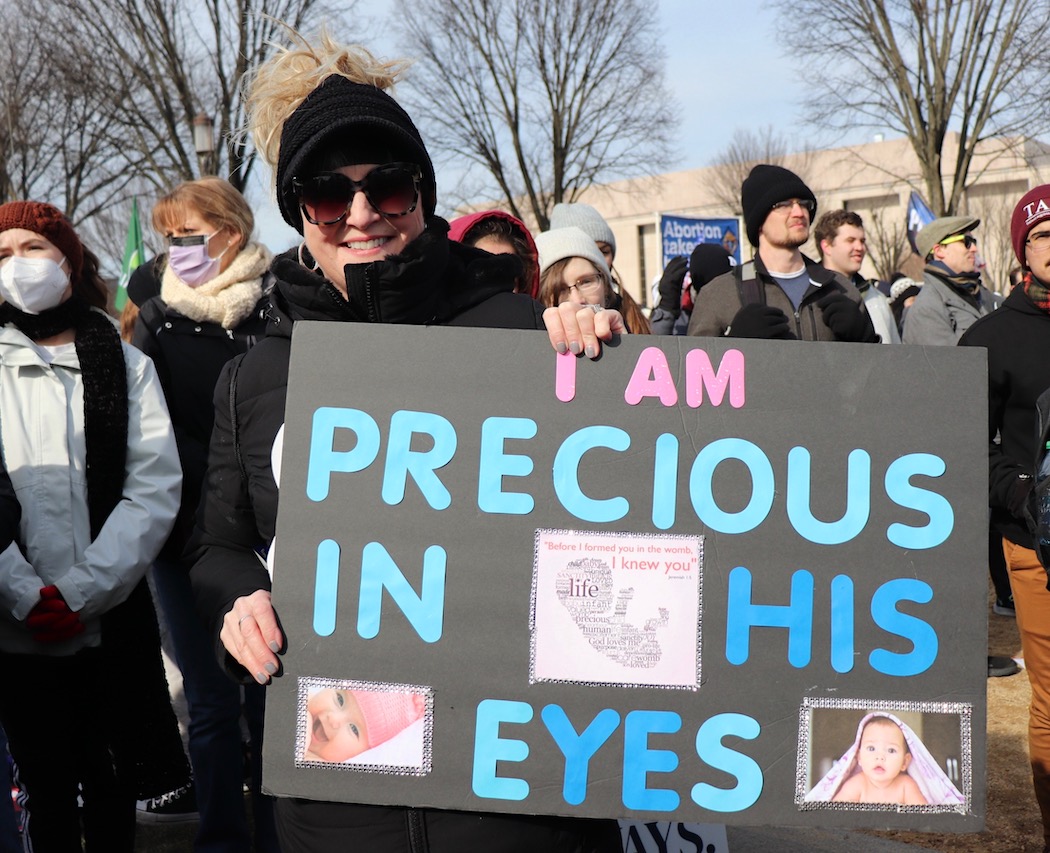 Voices of Youth and Empowerment

School groups came from near and far, both college and high school, most affiliated with the Catholic Church. 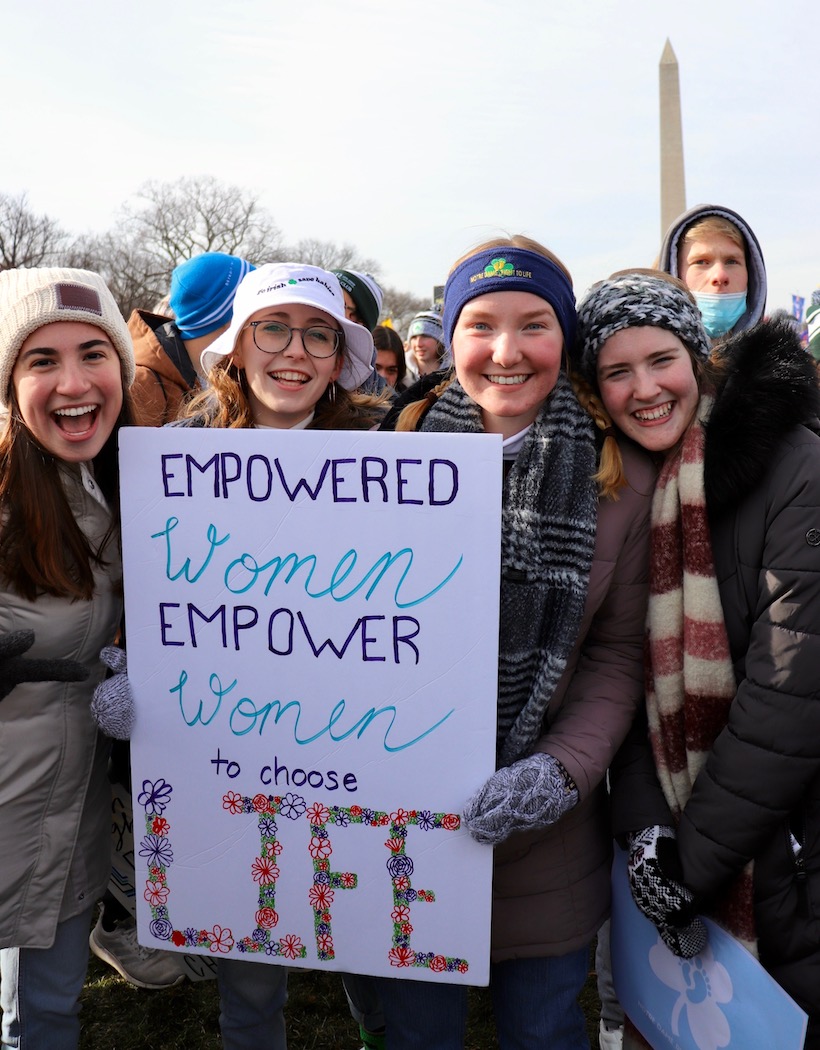 One sign quoted Saint Teresa of Calcutta. “Any country that accepts abortion is not teaching its people to love,” she once said. 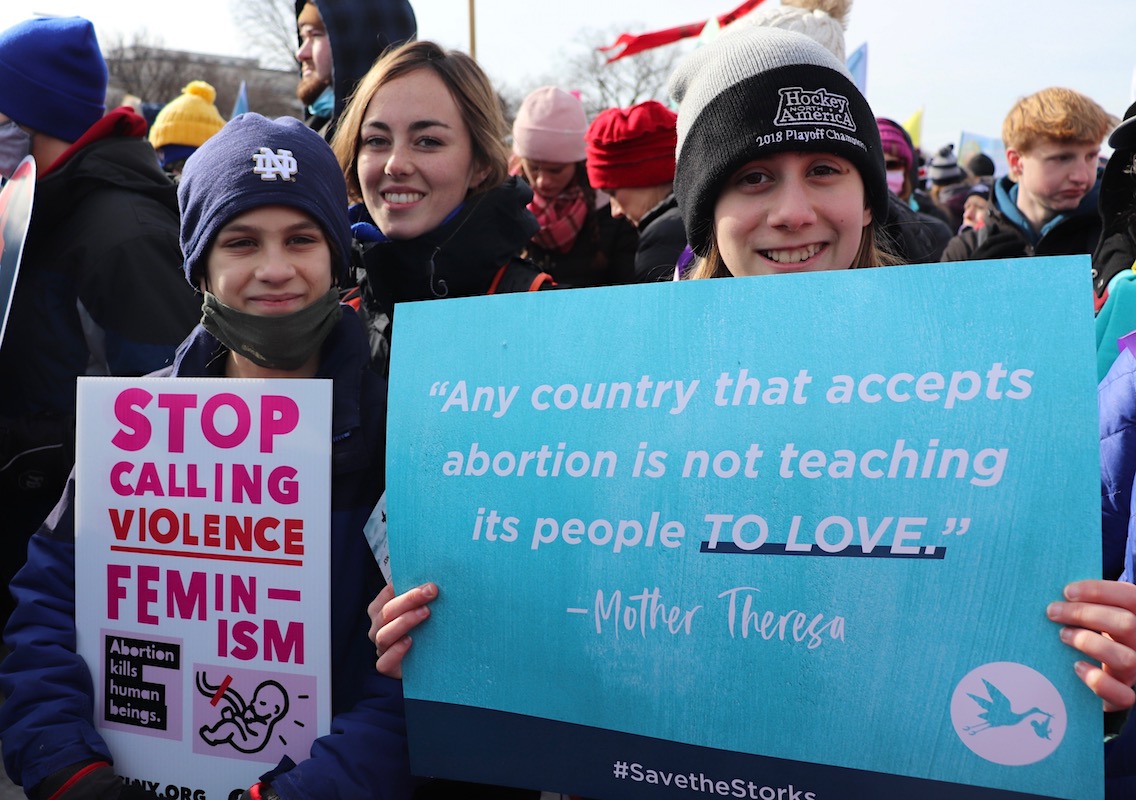 Many signs emphasized compassion and care for mothers in crisis. 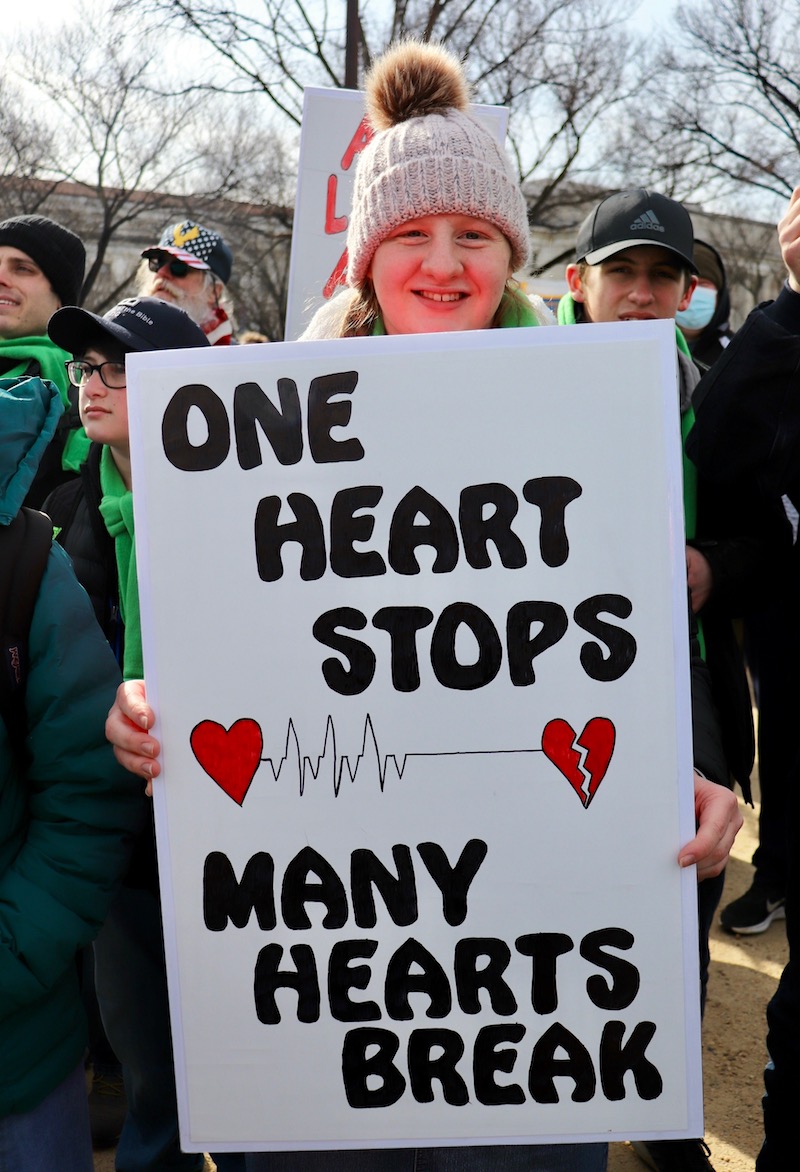 A group from Alexandria, Va. said they display their “Choose Adoption” sign outside local abortion facilities. They provide info packets to local mothers providing adoption information and local resources to support their child.

More than a dozen adoptions have resulted, they said. 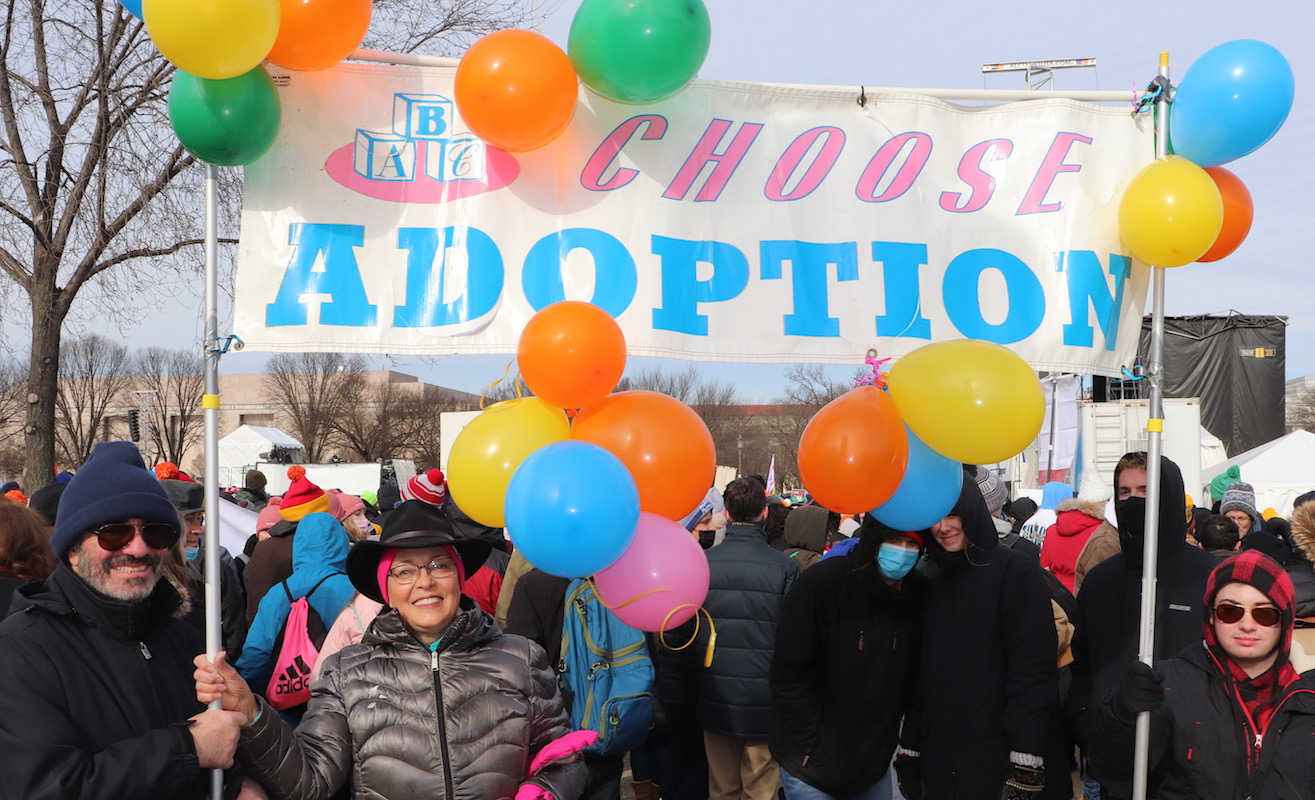 For pro-life groups, the March for Life serves as an annual reunion of sorts. Many coordinate throughout the year on conference calls and local activism, rarely working face-to-face. 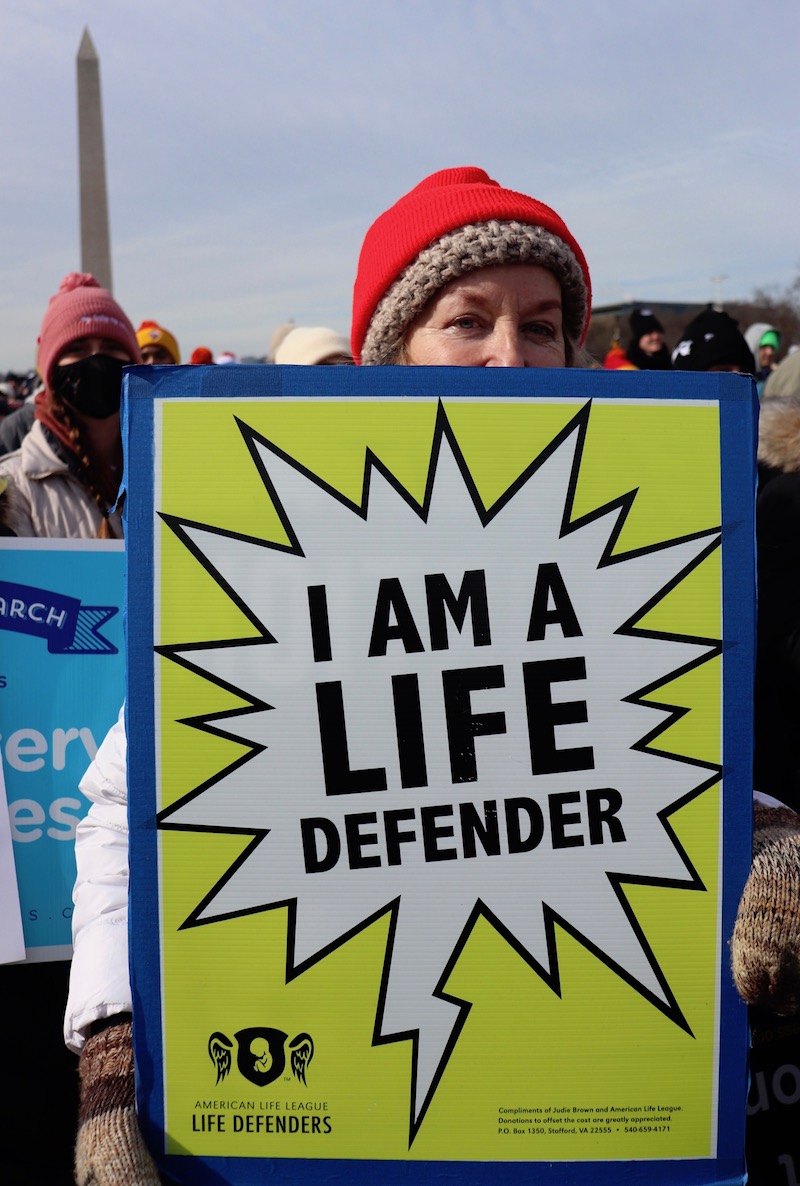 A group of students from the University of Notre Dame in South Bend, Indiana held signs that played on former President Trump’s campaign slogan. “Make America Pro-Life Again,” it declared. 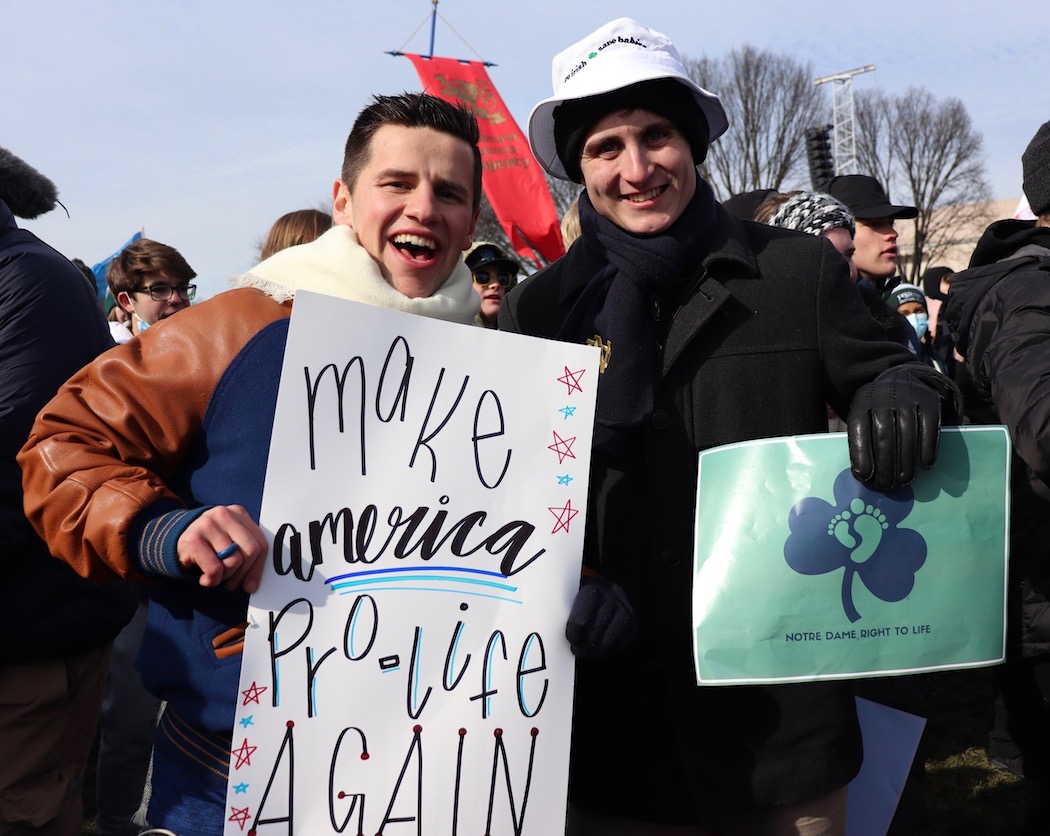 Their message reflected on the political dimensions of abortion. “Without question, because of the nature of this court case, abortion will be the number one or two issue after the decision comes down,” said Dannenfelser.

For most attendees, religious beliefs rather than political affiliation inspired their participation. 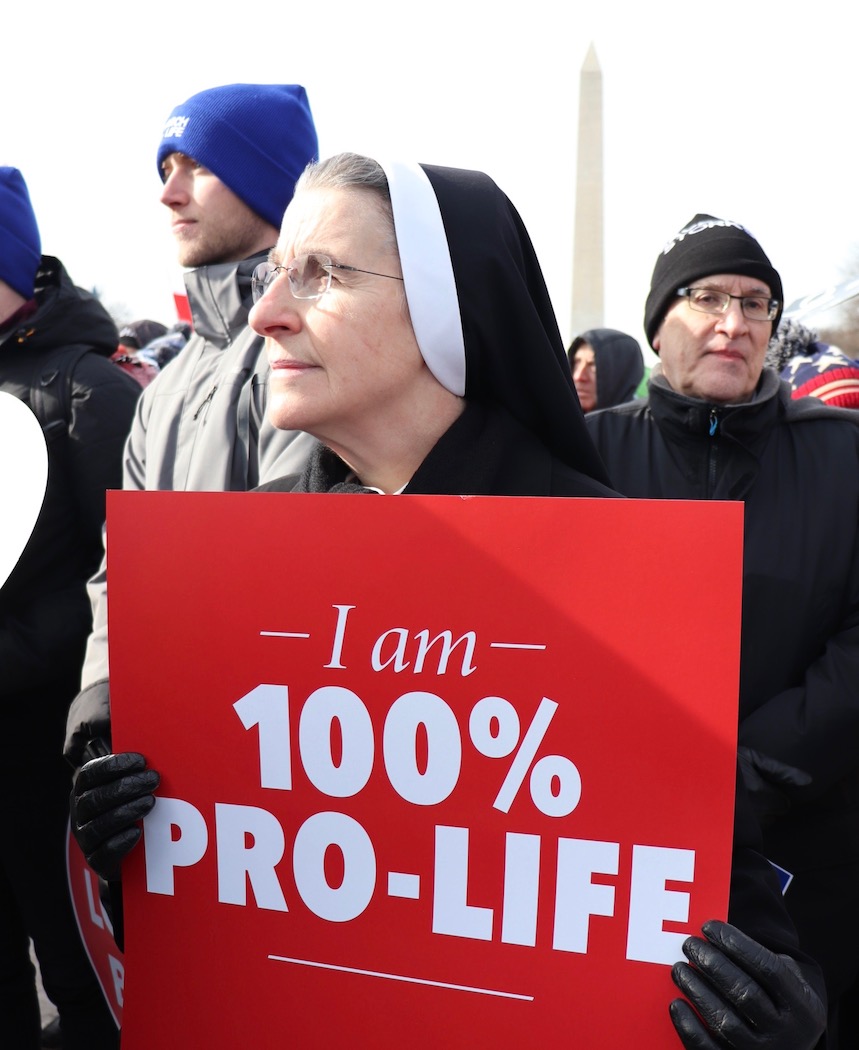 The mingling of religious and political convictions was front and center, reflecting the issue itself.

“The viability of the child in the womb is what the Supreme Court is looking at with this case,” said Dannenfelser. “And it’s a very viable possibility, so to speak, that they will strike down Roe v. Wade.” 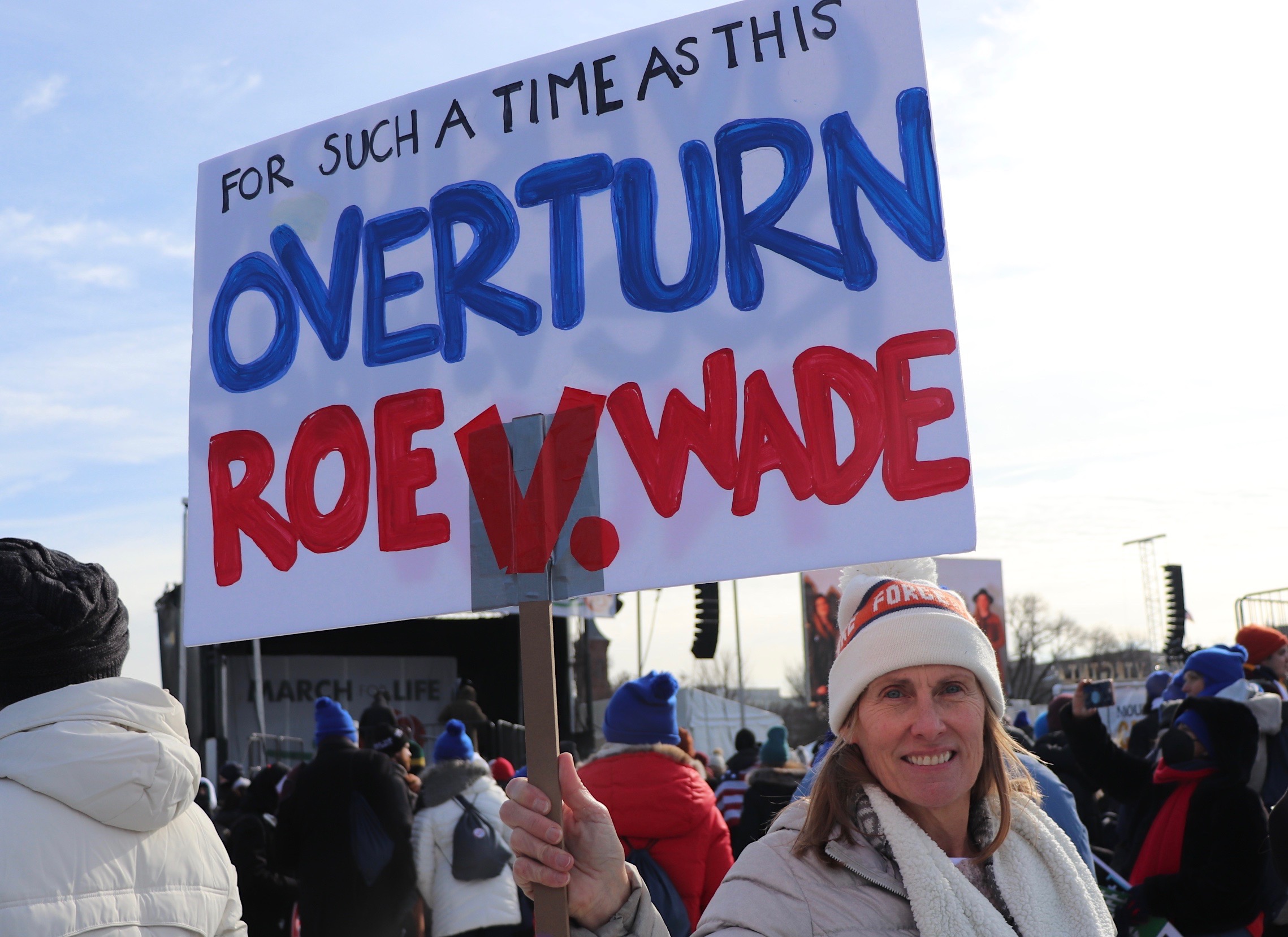 In that event, committed pro-life advocates realize their work will not be over. It will have just begun.