"That doesn't make for easy ministry, but we know who we are." 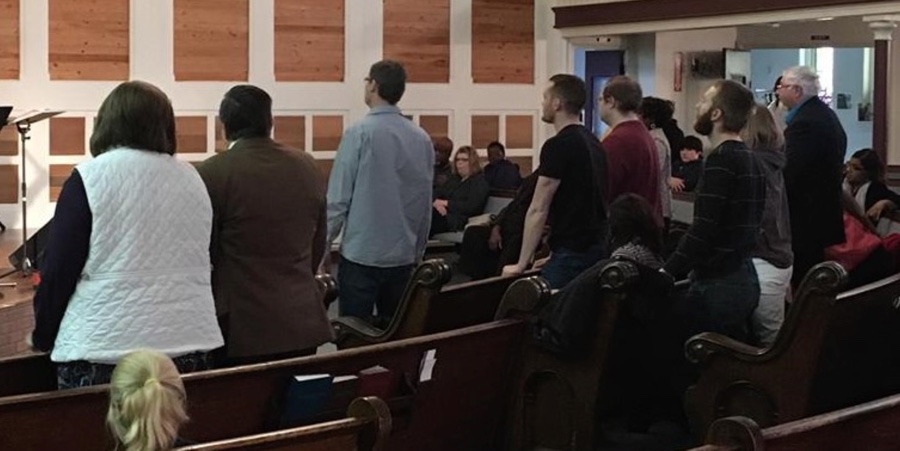 New Life Fellowship in Huntington, Indiana: Turned to the Lord, and not turning their back on the lost and struggling.

New Life Fellowship, a downtown church in Huntington, Indiana, has a unique ministry with people many churches find difficult to reach. The Stream met with Pastor Jimi Staton earlier this month to see how his church does it.

The Stream: Could you describe your church and how you see ministry there?

Pastor Jimi Staton: We’re in the center of Huntington, Indiana, located in what we call the poverty area, actually the block that has possibly the most drug use in the city. Huntington is southwest of Fort Wayne, with a population of about 18,000. Our church is made up of about 65 to 75 people, probably half poverty people (we’ve learned not to say “poor people”), and about half middle class.

When we were doing less real ministry with hurting people, we had up to 100; but as we got into more ministry, some middle-class families and single people left. Then we began to kind of just reach more of the poverty people. They have a lot going on in their lives, and they’re often transitional. If they can get a better job, they move on. We might have a family of three who just suddenly leaves. That doesn’t make for easy ministry, but we know who we are.

Our ministries include a soup kitchen that’s open every night, seven nights a week, holidays included. We have around 15-20 of our people and 65 to 70 volunteers from other churches and ministries who volunteer with that work.

The Stream: That’s a lot for a small church.

JS: You can’t do all that on your own. We also have a women’s shelter program for people who are looking for a place to stay, get themselves back on their feet. That opened up in 2013. On June 3rd we should be opening up another house for women with children too. So we definitely have a lot going on.

Our church includes a lot of people with addictions. Alcohol, drugs, pornography, and we also see a lot of gays and lesbians coming in. People from all walks of life. Single moms. A lot of single people.

The Stream: So how do you see these people as they walk in the door?

JS: I see them as people. That’s kind of basic. I don’t give them the big arguments, I don’t want to label them as lesbian, or drug addict. They’re people. God’s called us to be there on the crossroads helping people who have been abused, who are lost, who feel like there is no hope. We have a hope line for them.

We have a saying — it’s pretty strong, and this is more for the woman’s life house: If your way was working, you wouldn’t be here. So, we want to help you with a new plan. If you’d like to try that new plan, all aboard, come and try it. So that’s what you work with.

The Stream: I would think that for drug addicts or someone who’s in poverty to walk in the doors of the church, that isn’t too counter-cultural these days. But if someone who’s gay or lesbian or trans person walks in, they’re potentially walking through a kind of barrier, aren’t they?

JS: Right now across the street, there are two ladies who live with each other, with children, too. We’ve asked them if they’d like to come to church. They’ve said no, being sure they wouldn’t be allowed in the church. We’ve invited them a few times. I think sometimes there’s a wall that’s perceived on both sides. Yet I think we love people where they’re at and it shows. I believe God loves us all where we’re at — but enough not to leave us there.

I’ve known several people who want to fight their own homosexuality. Some do have differences with what we believe in, so they’ll go down the road to an “affirming” church. Others come here, though, struggling with it, asking for help.

We don’t have any judgment at the door. If we did, half our congregation wouldn’t be there. We are different. But I don’t think we’re that different, I think other churches out there are trying to figure it out as well.

The Stream: How do you approach the part of the question that has to do with the rightness or wrongness of homosexuality?

JS: I don’t lead with that. We believe God’s way of marriage and relationships is the right way, but when I first meet with them, I just tell them, “We love you and that God has a plan for your life; we’ll help you figure out what that is. But God loves you where you’re at.”

It’s a process. But our doors are open. We’ve seen people come to faith in Christ. One woman I prayed with at length — my wife and others praying, too — came to faith in Christ in my office. It was a dramatic turnaround. She was a practicing lesbian, but not happy with herself in that.

Another couple got very angry with me about it after that, some people who were really close to her. They came to me saying, “I can’t believe you did that. That was too much! We can’t find her now.”

So, I got on the phone and called her, and she just answered. It was that easy. She said, “Pastor Jimi, I’ve got to tell you what happened that day. For the first time I got in my car and I just spent time with myself talking with God. I was noticing the trees and the colors like never before.”

Now a lot of people leave when their lives turn around, as I said. We’re as much a spiritual hospital as we are a church. She was one of them; we didn’t see her much after that. Fast-forward a couple years, though, and I saw her again. She said, “I want to tell you something. I don’t mean to be rude, but I looked at a guy the wrong way — and I’ve never had that thought in my life. I’m attracted to men! There’s this guy at church I go to I’d love to date. I could see myself marrying this guy. I’m free!”

I don’t know how God will work, or what the outcome will always be. I had one young woman, a lesbian, who went to another church where she got baptized, and the preacher there said it would all go away. “That’s what the preacher there told me,” she said. “And it didn’t, so I was angry. So I came to this church.”

I knew she didn’t want to be this way, so I could be open and try to work through it with her. She asked me to talk with her, to see if I could help her. The first thing I told her was, “I don’t know what the Lord has for you. I know He created you. I can just help you the best I can.”

God has His own timing. We only see the moment, a glimpse. We may see a little more or less than others who don’t know Christ, but we don’t see it all.

Too many Christians — they want the people that come through the doors to be like them, to look like them, think like them. This is real ministry with real people being real.