The uncertainties are many and high 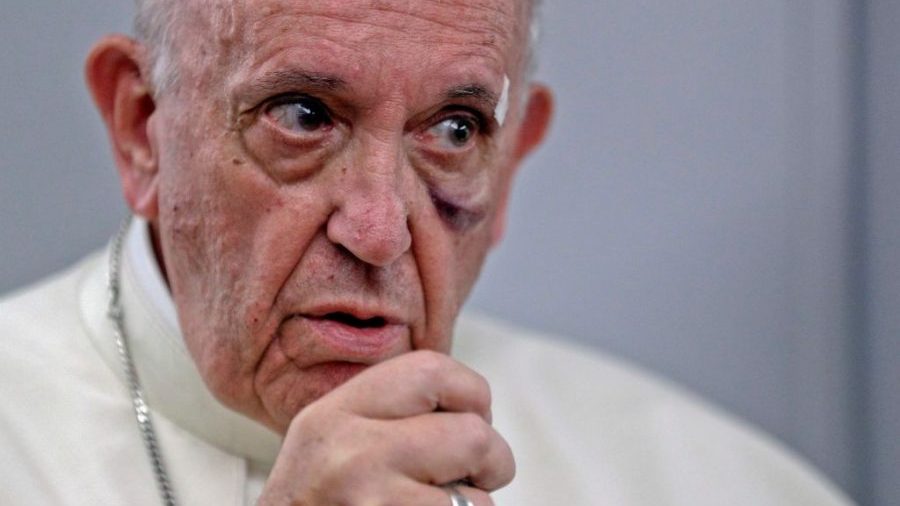 A reporter asked Pope Francis about the recent hurricanes in the Atlantic, adding the questions, “Is there a moral responsibility for political leaders who reject collaborating with the other nations to control the emission of greenhouse gas? Why do they deny that climate change is also be the work of man?”

The Pope answered in part:

If we don’t turn back we’re going down, that’s true. Climate change, you see the effects and scientists say clearly which is the path to follow. And all of us have a responsibility … to accept from the opinion or make decisions, and we have to take it seriously …

I would say: everyone has their own moral responsibility, first. Second, if one is a bit doubtful that this is not so true, let them ask the scientists. They are very clear. They are not opinions on the air, they are very clear. And then let them decide, and history will judge their decisions. Thanks.

Advice From a Scientist

The Pope is right. It is a good idea to ask actual scientists about their best guess of the uncertainties involved in climate change. One thing every climate scientist, myself included, will tell you is that it is 100% certain the climate will change.

It’s just as certain that nothing on earth can stop the climate from changing. Let me emphasize that “nothing.” It means just what it says. Nothing.

The climate of the earth has never stood still, and never will. That means efforts to “battle” or “stop” climate change are futile. This position in physics is known as climate realism.

Further, there is little real “minimizing,” let alone eliminating, our influence, or another species’ influence, on the climate, short of removing that species from the earth. This is proved easily. Since each breath you make influences the climate, albeit in a very small way, the only way to eliminate your influence is to stop breathing. Reducing our influence basically means culling the human herd.

If you doubt climate realism, the theory espoused here, then I urge you to seek out any actual climate scientist and put this to them. Be sure to talk to an atmospheric physicist of some kind, and not one of the multitude of hangers on who call themselves “climate scientists,” like economists or sociologists.

How Much is Too Much?

The big question is how much influence does mankind have? And the answer is nobody knows.

We know this is the answer because the climate models we built to account for our influence do not skillfully predict future temperatures. You would be just as well off if you were to guess that next year will be like this year, than if you used the world’s most sophisticated model.

This is why it was strange, in the Pope’s impromptu press conference, when a second reporter said, “The effects of climate change, here in Italy — I don’t know if you’ve been informed — has caused many deaths in Livorno. … Why is there a delay in taking awareness?…”

There is a delay because it’s irresponsible to implicitly blame the bad weather, which created the droughts, on mankind. We simply do not know this. And even if it were true, we do not know that we could have prevented the events that led to the drought. Perhaps, for instance, growing wheat in Ukraine tipped the balance in favor of drought in Italy. Should we have then forbidden Ukrainian wheat farming?

The Pope replied to the reporter (the ellipsis are original):

Why? A phrase comes to me from the Old Testament, I believe from the Psalm: Man is stupid. He is stubborn one who does not see, the only animal of creation that puts his leg in the same hole is man … the horse, no, they don’t do it. … There is arrogance, the sufficiency of “it’s not like that,” and then there is the “pocket” God, not only about creation, so many decisions, so many contradictions (…) depend on money.

And there (we must suppose) is the answer. Many matters do come down to money. We have to accept tradeoffs and uncertainties. Cutting back on some economic activity might reduce greenhouse gases and these reductions might lower the future temperature to some unknown level. But what will cutting back do? There will be a price to be paid. That price might be too high, especially since it’s unclear if a slightly higher temperature is good or bad. Yes, global warming may also cause good things to happen.